Han (S121) was a70-year old lady from Indonesia. Some time in June 2011, she went for a medical checkup in her hometown before a planed holiday trip to Korea. Unfortunate her CEA was high – at 25.0. The doctor did a CT scan and found that Han had a cancerous pancreas.

Han subsequently underwent a total of 10 cycles of chemotherapy, 6 of which were with Gemzar + Taxol + Avastin. Each treatment cost S$7,000. Han was told that chemotherapy would not cure her – only prolongation of her life by 6 months to a year. Without chemo she would only have 4 months.

The first visit to China was for 3 weeks. The subsequent visits were shorter. In total Han went to China five times. Her last visit was in February 2012. Her CA 19.9 on 11 February 2011 was written as > 1000 (note: earlier in Singapore >100 means 236,000. So > 1000 could be any number. Her CEA was at 387.6. In fact, the doctors in China did not think that Han need to come back to their hospital again for further treatment. The doctor said Han probably had only three more months to live.

My name is Alu from Jakarta, Indonesia. I was introduced to you by Mr.HM from Indonesia. Dr. Chris, my mom has pancreatic cancer (diagnosed last year June 2011). She already got chemotherapy treatment in Singapore from June until October 2011. In November 2011, she went to a hospital in China to undergo Cryosurgery, Nano Chemo. She already received several times of nano chemo treatment in China.

Last week, she went to do a PET/CT scan in China and found out that the cancer has metastasied to her colon and liver.

The doctor did cryoablation for her liver cancer but for the other tumor cancer, it can’t. So they planted Iodine-125 seeds. But today, the doctor said that probably my mom has only three months to live.

So our family is looking for alternative treatment and we’re told about your treatment in Penang. Dr. Chris, could you please advise what to do next? Should we bring our mom to Penang to see you? She’s still in good condition. Can walk, can eat, etc. She is now 70 years old.

Btw, my mom’s condition now is still OK. The last condition of my mom, her stomach was a bit bloating. So the doctors in  China released the fluid from her stomach through a tube (from stomach) into a bag. The fluid color is a bit brown (old yellow). The doctor  said it is probably due to liver problem (?). Thank you Dr. Chris.

Her PET scan results were as follows: 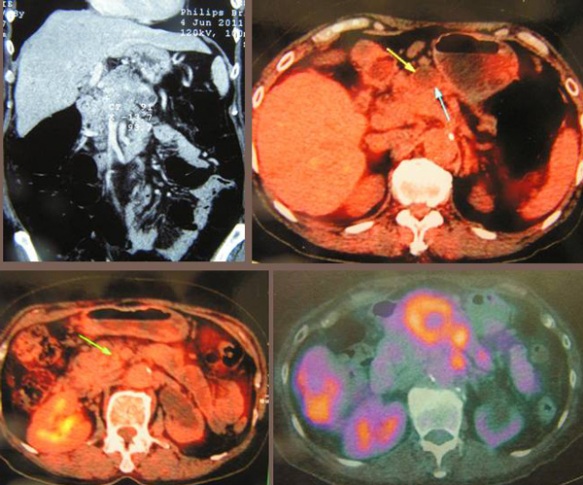 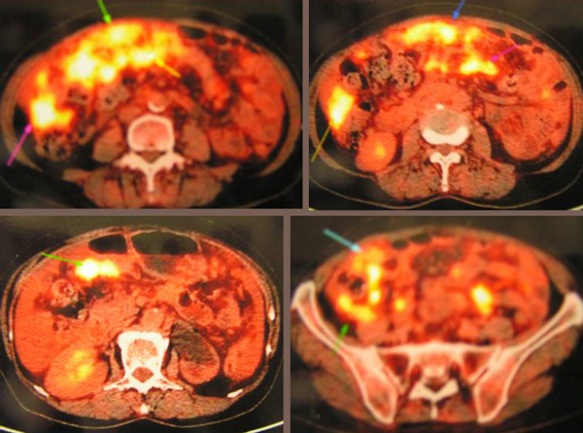 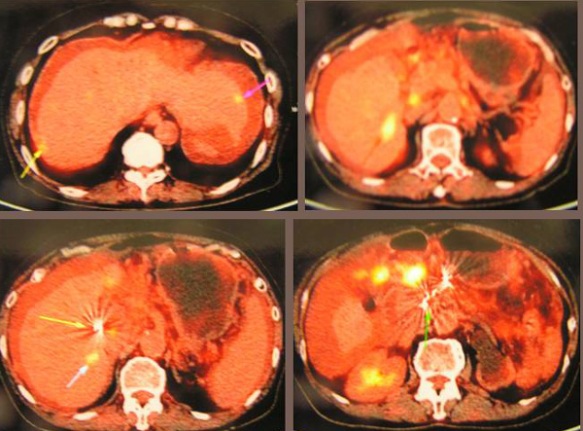 Han was prescribed herbs and the only message we could impart to Han was that we would try our best to help her. There was far too much damage for us to handle. Anyway, We prescribed herbs for her to try.

My mum has finally ended her sufferings in fighting pancreatic cancer. On Thursday morning 4.10 am, Apr 26, 2012 she passed away in a very peaceful way. All our family member were around her, praying with her, singing a hymn and read Bible together. She has been laid in bed for around ten days – almost no energy to do any activity. During those ten days, I was beside her and we talked much about the Bible. She’s ready to go to her Creator …. Thank you for all your kind support during my mum’s heavy days.

We appreciate your kindness during those days.  Regards.

There is an important lesson we can learn from this case. For those with serious cancer, such as pancreas, the options are extremely limited. I can only say this. If you do something – go for whatever medical treatments you can find –chances is that you will die. If you opt to do nothing – or go for alternative medicine – you also die. I am sorry I cannot offer you comforting words. If I try to paint a more optimistic scenerio than this, I am cheating you and I am also cheating myself.

Han was told by the oncologist in Singapore, before the treatment, that chemotherapy would not cure her – only prolongation of her life by 6 months to a year. Without chemo she would only have 4 months.  The reality was Han survived 10 months even with the best of treatments. The family has spent probably no less than US$ 100,000 for all the treatments in Singapore and China. In addition, she had to endure the side effects of the treatments. When Han was here, I asked her and her family members – Would you rather die in 4 months peacefully or try medical treatments to prolong your life for 6 to 12 months? And with that suffer all the side effects besides spending all the money?  The answer was they wanted to try medical treatments in spite of all the odds.

Everyone should respect that decision. By doing that everyone involved would be satisfied, “I have done my best to fight the disease.”

Some of you reading this article would not like what I wrote. You want to win – or at least have a chance to try. I understand that. I cannot tell those who go to the casinos that it is futile trying to earn easy money that way!

Over the years, I have come across cases of pancreatic cancer and all of them don’t survive long no matter whatever medical treatment they undergo. For some examples: https://cancercaremalaysia.com/category/pancreatic-cancer/

Sometimes I would like to pose this question: What happens if the patient opted to do nothing invasive? Meaning just take herbs, change lifestyle and diet? Can she/he live longer and without suffering? Nobody can answer that. It is  entirely for the patient and her/his family to decide.

Let me end by quoting what some experts have got to say. 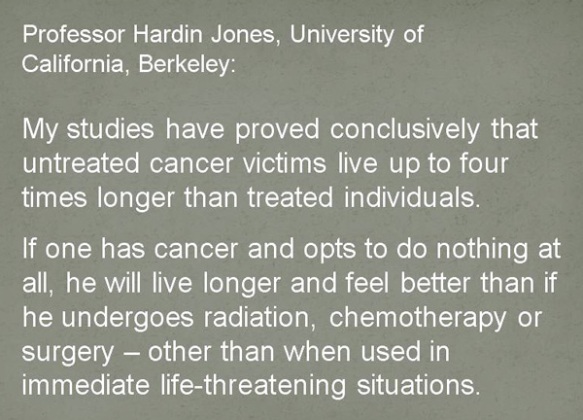 The three slides below are quoted from How Doctors Die by Dr. Ken Murray, M.D.

Dr. Murray is a retired family medical physician who had a private practice of general medicine in Studio City, California for about 25 years, until his retirement in 2006. He also held a Clinical Assistant Professorship in Family Medicine at the University of Southern California. 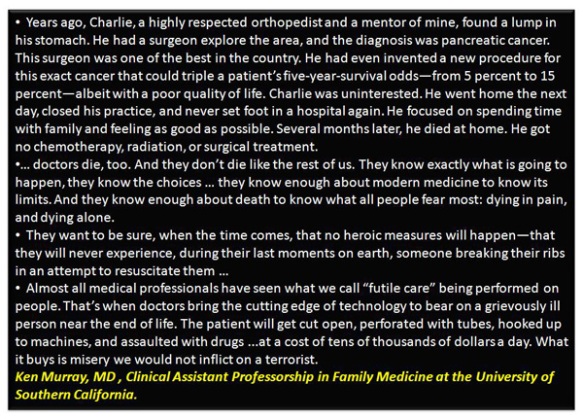 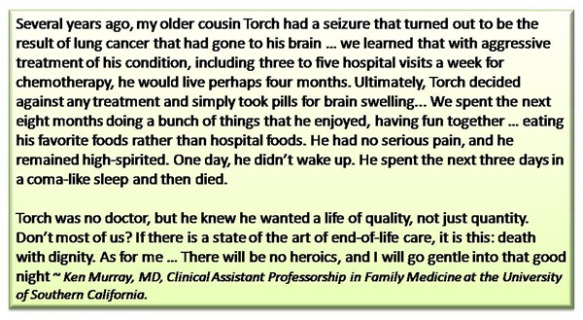