Nur (not real name) came to our centre this morning. She put out her tongue and said she can now taste her food! Health wise she feels great!

Listen to what she shared this morning!

Nur: My tongue is much better now. I don’t feel like there is a thick layer on top of my tongue. When I eat chilly, I can feel the “pungent and biting” taste. Before I was not able to feel that.

Chris: So, your food is more tasty now?

N: I don’t feel tired anymore. Before I could not even perform my daily prayers. Now, I can pray even 20 times a day. Before I had to receive a weekly infusion to energize me, but I don’t need it now. Now, I can do all the house chores while my children go out to work. Before that I was not able to do a thing at home for lack of energy.

There is no more blue-black patches on my arms and body. They are all gone. My skin do not itch anymore.

We had posted the story of Nur earlier. To know more about her problems when she first came to see us, click this link: https://cancercaremalaysia.com/category/tongue-disease-cancer/

I give Nur a great thumb up! She is indeed an amazing, dedicated  and adorable patient.

Wah, I have patients who “bargained, and asked for special consideration” just because they said they come from “very far.” And what is very far? A 10-minute drive across the Penang bridge! Or a 2-hour-car ride away! Or one and a half hour flight away. No one can beat Nur!

For those of you who want to know what pempek is, click this link: https://id.wikipedia.org/wiki/Pempek. Pempek or empek-empek is a special food of Palembang. It is made from fish, sagu, egg, garlic, salt and artificial flavoring agents. This is one kind of food which patients should stay away from.

Whenever she comes to see us, with great difficulty, she carries a small box full of fruits or natural products from her kampong for us. No!no! patients need not have to do this at all. Why take all the trouble to do this when we can easily buy them here? In her own humble way, we know that this is a gift from her heart which we must appreciate.

This is a great morning indeed. Thank God for this blessing.

Nur is a 64-year-old Indonesian lady. Her problem started about 4 years ago (2011) when she had a small lesion in the middle of her tongue. She did nothing about it. In 2002, she consulted a doctor who did a  biopsy for suspected tongue cancer. The result did not find any malignancy and the doctor diagnosed it as “glossitis kronis dengan sicatrix” (chronic glossitis with cicantrix).

Note: Glossitis is an inflammation of the tongue that causes it to swell in size, change into different shades of red, and develop a smooth appearance on the surface. Cicatrix is a scar left by the formation of new connective tissue over a healing sore or wound.

The problem became worse and almost the entire tongue was “infected”. In addition, she had purplish patches on her forehead and hands as shown below. 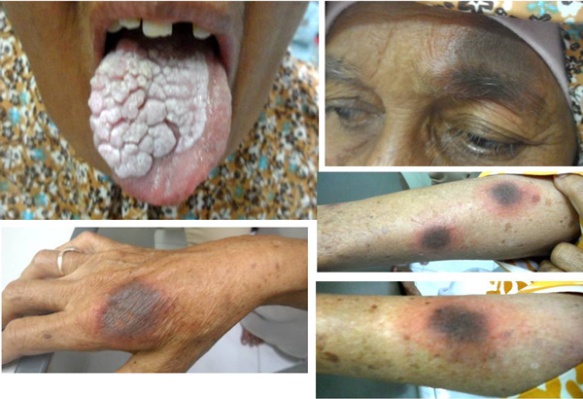 In 2015, Nur consulted a doctor in Bandung and was told to operate her tongue. Nur and her family refused and came to seek our help.

We told Nur, we were at a loss — we have not seen such a case before. So don’t expect us to cure her. But we can try since Nur did not want to go for medical treatment (note: her daughter is a nurse!).

Listen to our conversation over a period of 7 months on the herbs.

Patient:  It started off as a small lump. I did not do anything about it. It was only after 2 years that the problem became serious and the lesion started to spread out over the tongue.

Daughter: There were some lumps under the tongue. We went to the doctor and was told it was a fungal infection.

P: I was given medicine to take but it was not effective.

Chris: Then the problem dragged on until 2015?

D: We went to see a doctor in Bandung and was told to operate the tongue.

P: Want to operate but I didn’t want.

C: Operation means to cut off the tongue?

D: The suggestion was to remove the top layer of the tongue and then do a transplant. We did not want to do that.

C: I have not seen such a case like this before. So I don’t know what I can do. I am not sure if it is cancerous or not. I have herbs for the tongue but for your case, I cannot say of the herbs will help you or not. If you want to try — okay. But if after taking the herbs for 2 to 3 months and you do not get better, then you should not take the herbs anymore.

D: According to the doctor in Bandung, he said it could be a slow growing cancer based on what he read from the internet of a similar case like this.

C: It is indeed an exceptional case — rare. I believe the doctor himself has not come across many cases like this.

Daughter No. 2: She is afraid and anxious.

C: Don’t be afraid. Let’s be patient. Even if you are afraid, this fear is not going to cure you.

C: If you can’t sleep because you are afraid and worried, this will make you worse. The more you don’t sleep the worse you become. Don’t be afraid. Go home, pray and ask God to help you.

C: After taking the herbs, how do you feel?

P: I have more strength. I am not tired anymore. Before I was able to work.

C: Let’s compare the day when you first came here and now, 2 months later after taking the herbs — do you feel better? More confident in what you are doing for yourself?

P: I am better! More confident.

C: Did you feel you get worse?

P: Before I was half dead (with action). Now okay.

C: Ibu, you were on the herbs for 7 months now. Do you feel better?

P: Good! I can walk far. Half (of the tongue) is already good, only the other half not yet. Before taking the herbs, almost the whole tongue was infected.

P: With respect of the tongue, no problem at all.

P: Yes. I have more energy. Before I came here I had to go for “infusion” to boost up my energy — once or twice a week for the whole month. After that I came here.

C: After the “infusion” you were better? More energy?

C: After taking the herbs, you have more energy. Herbs are better than infusion?

What is the problem with her tongue? Cancer or not cancer? We don’t know. Let the expert decide what label to give to such a problem (see note below).

What is important to us (and also the patient) is, Nur is well. Before coming to CA Care she was desperate, lost and full of anxiety. Now, with the herbs, she is better — emotionally and physically. Even her tongue has improved.

What more can we ask for?

More healing will come if we learn to cultivate a sense of gratitude in our hearts. Be grateful for what we are each day. With God’s blessing the body gradually heals itself.

Note: Two ENT specialists responded to our enquiry — that is this problem?

Another ENT explained: There is a large area of hyperkeratosis of tongue involving the greater part of dorsum and the Right lateral edges. The skin shows purpuric patches extensor surfaces of wrist, forearms  knee, and the Left brow. Smaller flat brown macular spots on the limbs can be part of the purpura or café o la spots. Tongue irritation caused by betel nut, tobacco can cause the leukoplakia. Hairy Leukoplakia due to immune deficiency conditions. HIV, immune suppression can cause it. The problem is how to tie the above to a bleeding diathesis manifested on the skin. Leukoplakia is premalignant. Biopsy is needed.

From the internet we find the following information.