Tim (not real name) was 86 years old when he was diagnosed with recto-sigmoid cancer in October 1999. There was no evidence of metastasis. He did not undergo any surgery, chemotherapy and radiotherapy – the universal standard recipe of cancer treatment.

His nephew, who is a medical doctor, suggested that Tim sought our help. On 2 April 2000, Tim’s children came to us for help (Tim did not come himself). His condition then appeared to be normal for a person of his age. He could eat, sleep, move around and moved his bowels without problem. However, he had pains when he ate too much. He also had rashes after taking antibiotics.

Tim was prescribed some herbs. And he continued taking the herbs any way he liked. Actually we did not take much notice of his progress after that.

It was not until seven years later that Tim’s case was brought to our attention. His children came on   6 May 2007 to inform us that their father passed out blood in his stools.

An ultrasound done on 25 April 2007 showed the presence of several small cysts in his liver but there was no solid mass. His bowels were filled with gas. 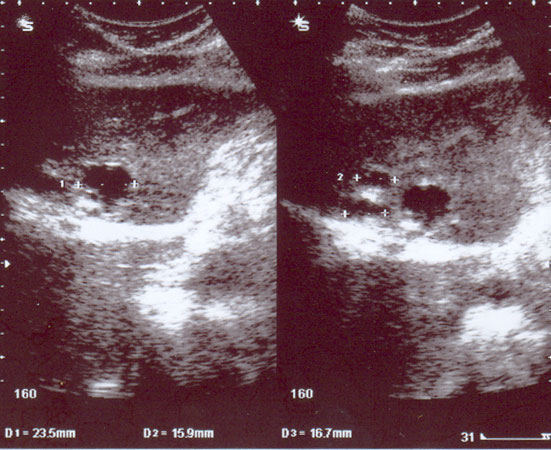 I had a chat with Tim’s children and daughter-in-law and got know more about what was going on. Tim’s wife has died many years ago and Tim is, up to this day, staying alone. He refused to move in and stay with any of his nine grown-up children prefering to live by himself, in spite of his age. He has this “independent” streak in him. With this, we can understand why his children suspected that Tim was not taking the herbs properly after some years of an apparent cure.

The following are excerpts of our conversation on 25 April 2007 which could shed some light as to what had gone wrong.

Chris: Earlier he was talking the herbs regularly?

Daughter-in-law: Regular and after so many years he was already okay.

Chris: It has been 7 years … 2000 until now. He was taking Capsule A, GI tea and C-tea. Later you said he did not take the teas any more and was only on Capsule A. And you said he was alright.

Son: For his colon, I think the last few years I brought him for a check up. It was all clear. I also took his stools for examination. They said there was nothing. Everything was okay.

Chris: This was done in a hospital?

Chris: So this means that 3 or 4 years ago, he was still okay.

Son: He passed out blood in his stools. At first we thought it was piles.

Daughter-in-law: This was already one year.

Son: We went to this surgeon (in the hospital) and he also said it was piles.

Chris: Cannot be, cannot be. Because has a background of colon cancer.

Daughter: Exactly, he has a history of colon cancer!

Chris: Let me explain. Colon cancer cannot go away. There is no such thing as curing cancer. Even when the tumour was cut off, the cancer can still come back. In your father’s case the tumour was still left in there.

Daughter-in-law: At the later stage, he started to take less herbs.

Chris: Oh, the dosage was reduced from 2 capsules three times a day to – what did he do?

Son: One capsule per day!

Chris: He might as well not take the herbs at all.

Son: He (my father) told me: I am already healthy. Why waste money?

Chris: He was not taking the herbs properly. There is no two way about it. The cancer will come back. Okay what do we do now? First I want to ask you: Is he prepared to take herbs again?

Son: Yes. He is prepared to take anything now.

Chris: Before he was stubborn?

On 15 January 2009, Tim’s daughter came to our centre to collect more herbs for her father, meaning Tim is still doing fine. Lest we forget, Tim is now 95 years old!

Comments: This is an unbelievable case of healing for the following reasons:

a)     All too often we are told that if there is a tumour in our colon, we must get it out as quickly as possible. This advice seems logical and convincing. But in this case – do you think this logic is applicable, given that Tim was already 86 when he was first diagnosed?

b)     If Tim were to have a surgery, what then would be the next requirement? Chemotherapy of course!

c)     What could have happened to such a patient like Tim if he had surgery? Would be able to live 10 years after that? Can Tim cope with the colostomy bag – fitted after his surgery – by himself? His life would have been difficult having to live with the stoma through out his life.

d)     After surgery, if Tim was subjected to chemotherapy, what do you think such drastic treatment would do to a person of 86?

e)     With such a tumour growth, it is amazing that there is no serious liver metastasis. Why is that so?

f)       Over the years, we have come across numerous cases of failed colorectal cancer. Patients died a few years later, after having undergone surgery, chemotherapy (and even radiotherapy). Why is it so?

g)     Let me quote just one example. Tony Snow was the press secretary of George W. Bush, then President of the USA. In my writing earlier: Case Report 7: Ten Questions About The World’s Most Well Fought Battle Against Colon Cancer, I wrote:

I would imagine that the most powerful man on earth (the President) would be able to do something great to help his beloved staff and fellowman who was in great distress. I believe that Snow would have gotten the best – the best advice, the best doctor, the best drugs and the best hospital – for him to fight his war against cancer. So, to me, this battle against cancer would probably be the most well fought battle ever waged inAmerica – the world’s most powerful nation.

Snow as diagnosed with colon cancer in 2005. He underwent surgery, 6 months of chemotherapy and was well. Then 2 years later cancer recurred and Snow had surgery again in April 2007 followed by more chemotherapy. In July 2008 Snow died about 3 years after his diagnosis.

(Initially medical expert said): This is a very treatable condition. Anyone who looks at this as a death sentence is wrong. What does the life’s reality tell us? Snow died – dead wrong or dead right?

What do you think is the real cause of his death? The recurrent tumour in the abdomen has been taken out. Only some cancer could have been left in his liver. Could this kill Snow? Or was it the treatments used to treat the cancer that killed him?

(Another expert said): This is a treatable disease. What do you think of such a statement? Surely, any disease is treatable but can it ever be cured? Treatable does not mean curable at all.