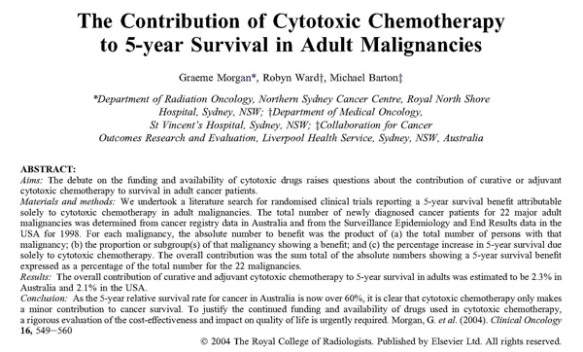 The three authors of the paper are: i) Graeme Morgan, associate Professor and radiotherapist at the Royal North Shore Hospital in Sydney. ii) Robyn Ward, a senior specialist in Medical Oncology and Associate Professor of Medicine at St Vincent’s Hospital, Sydney. She is also a member of the Pharmaceutical Benefits Advisory Committee. iii) Michael Barton, Research Director Associate Collaboration for Cancer Outcomes Research and Evaluation, Liverpool Health Service, Sydney.

Without doubt, these researchers are professionals of great repute. They know what they are saying. Their opinions are just worthy, if not more valuable, than any doctors that you have consulted for your cancer.

They publish their work in the Journal of Clinical Oncology. This is a peer-review well-respected medical journal. Their paper was submitted for publication on 18 August 2003. It was revised and finally accepted for publication on 3 June 2004. What this means is that, the paper has been scrutinized by fellow doctors and has undergone the normal peer-review process. It is not a back-door, arm twisting way to get into the pages of the medical journal.

Given the above, you and I (and even fellow doctors!) should not have any doubt as to the credibility and validity of what they say in their research paper.

Why do they publish such a paper? I cannot give you that answer, but I can only guess. In a radio interview with the Australian Broadcasting Corporation (ABC), Dr. Morgan was asked this question: Is this, I wondered, an in house battle, the revenge of the radiotherapist? Dr. Morgan replied: Well, one can cynically say that but the reason I did was that we were sick and tired of hearing about these new drugs and it wasn’t really cementing into anything. And the reason for my doing that paper was to really show that there hasn’t been any improvement in survival, or the improvement has been very, very modest despite all these new drugs and new combinations and bone marrow transplants.

Is there anything wrong with the paper?  There is nothing wrong with the paper and the data presented. Their study was based on data of randomised-controlled trials (RCTs – the gold standard of medical evidence) published from 1 January 1990 to 1 January 2004. Data were also obtained from the cancer registry in Australia and USA. The contribution of chemotherapy to survival of those over twenty years old and who suffered from twenty-two major cancers were studied.

If there is anything wrong at all with this paper, it is because it tells the whole truth about chemotherapy. And the truth hurts. The authors did not “sing the same tune” as the majority of the flock. That is the difference (or the wrong!).

What did they say?  The absolute real-life data that this article carries is most shocking: The overall contribution of curative and adjuvant cytotoxic chemotherapy to 5-year survival in adults was estimated to be 2.3% in Australia and 2.1% in the USA. In short, they said that the contribution of chemotherapy is not more than 3%.

Can this be true? Well, they are the experts. And they said so, loud and clear. Indeed some doctors in Australia were angry. People said the paper was misleading and unhelpful.

The editorial of the Australian Prescriber (The emperor’s new clothes – can thermotherapy survive? 29:2-3. 2006) quoted Professor Michael Boyer, head of medical oncology at the Sydney Cancer Centre, Royal Prince Alfred Hospital, Sydney as saying: The fact is that from a patient’s perspective they are not really interested in how much chemotherapy contributes to the cure of all patients … I don’t think this paper helps from a patient’s perspective.

Medical experts like to claim that they understand patients better than the patients themselves. So they give authoritative pronouncement on patients’ behalf. I beg to differ. I think patients know themselves better. Do you agree that you are not interested to know how much contribution chemotherapy provides to your cancer cure? To me, this is the very answer each and every patient wants to know before he/she is subjected chemotherapy. But unfortunately, no such answer is ever provided. And if patients ask too many questions, they will be scolded or chased out of their doctors’ office.

In the same radio interview with ABC, Professor Michael Boyer was again quoted as saying: the fact is that if you start … saying how much does chemotherapy … the numbers start creeping up …If you pull it altogether that number probably comes up to 5 % or 6%. I guess what’s important is that it doesn’t go up to 50% or 60%. This is indeed mind-boggling. The percentage of 2.3% was disputed. According to Professor Boyer it could be 5% to 6%.

Wah, to split hairs – it is not 2.3%, it should be 6% . Dear Professor, is that a big enough or meaningful difference for us to dispute on?  If you ask any cancer patient what is the difference between a 3 % chance of cure and a 6% chance of cure, most of them may just say it is “nothing, peanuts”. If you tell cancer patients your chemo-treatment is only contributing 3% or 6% to their cure – I would guess MOST patients would just disappear and not see their oncologists ever again!

But to some “tunnel visioned” statisticians and researchers, 2.3% and 6% is a big difference and the difference is significant (to use the scientific jargon).

As an academic myself, I know how we experts “massage” data. For example, if you do chemo-X, you get 2%; if you do chemo-Y you get 4%; and chemo-Z, you get 6%. You can twist the picture and say chemo-Y is 100% better than chemo-X. And chemo-Z, which gives 6%, is three times better than chemo-X. That is how “educated people” massage their data to make it appear and sound good.

What is the “truth” about the contribution of chemotherapy to survival of cancer patients?

Dr. Morgan et al. provided the table below detailing the effect of chemotherapy on  22 types of cancers.

The table above laid out in clear terms the number of people who had various types of cancers and how many of them survived after five-years after receiving chemotherapy.

The data presented are not “massaged” or “manipulated” in any way. This is the kind of data patients have been looking for and which, before this paper, have been elusive and not forthcoming.

The authors said that their numbers were conservative estimates.

Let us critically “dissect” and examine the table and let me highlight what these numbers tell us:

Let us examine every cancer studied and see what chemotherapy did to them.

1. Chemotherapy provides benefit in excess of 10% in only four types of cancer. Of these four, two are rare. The most common is Non-Hodgkin lymphoma and the benefit of chemotherapy is only 10.5%, for cervical cancer it is only 12%.

2. Chemotherapy provides less than 9 % benefit in eight types of cancer. These are the common cancers we often encounter.

3. Chemotherapy provides zero % benefits to the cancers in the table below.

The authors want us to know the following:

What do we do with such truth? Give it a quick burial!

There seems to be a bit of hoo-ha in Australia, because the study was done in Australia. But for the rest of the world – in the US, UK, Europe, etc. nobody bothered to know or comment. This NEW truth appears to be of no importance or consequence. The truth, as often done, if it clashes with the Establishment, may just be given a quick burial. Nothing is said even by the so called “independent mass media”.

Certain “enlightened” experts may wish to dispute the above research results. One possible argument would be: “These results were based on “old” drugs. Now we have newer and more effective drugs. We could do better.” If you buy this argument, let me ask you to hang on to your seat tightly! I shall be addressing this issue in the next few articles in this series.