Let us assume that you are a person with a magic touch – what you say is granted – What would you do if you see more and more cancer people getting cancer every day? (Note: in USA alone, more than 1,500 people will die of cancer per day).

The experts surrounding you would probably advise you (assuming you don’t know how to think for yourself): Build more cancer hospitals! Trains more oncologists! Make chemo-drugs cheaper and easily available to all those who need them! Bravo problem solved. QED (Quiet Easily Done was what my mathematics teacher said we should write at the end of our assignment after solving a problem).

A brilliant suggestion indeed! So you think, but you can be dead wrong!

Let me share with you these e-mails. And I get to receive such e-mails or hear such horror stories all too often.

I came to know about you after reading Betty Khoo-Kingsley’s book on Cancer Cured and Prevented Naturally. I am amazed on your method of treatment and I believed you may be able to help my husband who is a cancer patient.

My husband was diagnosed with nose cancer in August 2010. He did radiation and it went into remission. The cancer recurred the following year after a year’s break. He did three cycles of chemotherapy but it did not work and he underwent surgery in November, 2011.

In May 2012, PET scan showed a recurrence. He did another three cycles of chemotherapy and the chemotherapy failed again.

He had no choice but to do a surgery on his nose again in July 2012. A PET scan done three months after the surgery showed recurrence of cancer again. He was put on oral chemo but the latest PET scan in November 2012 showed the cancer cell had gone into his cervical spine. He is not on any medication now.

I am truly desperate. Thanking you in advance. Warmest regards. God bless.

My father was diagnosed with 4th stage cancer two years ago, when the doctor found a 13 cm tumor around his kidney. The tumor and the kidney were removed by surgery. He has been taking Sutent for the past two years under the treatment and supervision of an oncologist at Hospital KL.

About a month ago, he had fluid in his lungs and was hospitalized.  A CT scan showed that the cancer had spread to his lung, bones, lymph nodes, liver and pelvis. The oncologist said Sutent is not working anymore and that they do not recommend taking another stronger medicine as his body is very weak now. So the doctor told him to go home and treat the fluid in lungs first and will not give any medication for the cancer.

I came across your centre with testimonials and would like to seek your consultation on my father’s condition. As my father is a stroke patient together with his lung condition, it may be quite difficult to put him in the car and drive to Penang for consultation. We live in Melaka.

Actually providing facilities – research money, hospitals, more oncologists, more drugs, etc. has proven to be a big flop when the whole concept of treatment is a basically flawed!

That was what President Nixon of the United States of American was trying to do when he declared war on cancer on 23 December 1971. He promised victory within five years. Money was poured into cancer research  by the billions – after all American was said to be the first and only nation to have landed a man on the moon.  So what is the big deal with conquering cancer? But for many decades the Americans and the world have been misled – even up to this day.

Read what Dr. Margaret Cuomo, has got to say in her book (below): 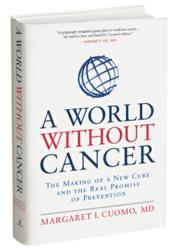 About The Author:  Dr. Margaret Cuomo is a board-certified radiologist and an attending physician in diagnostic radiology at North Shore University Hospital in Manhasset, N.Y. for many years. She specializes in body imaging, involving CT, Ultrasound, MRI and interventional procedures. Much of her practice was dedicated to the diagnosis of cancer and AIDS. She is the daughter of former New York Governor Mario Cuomo and Mrs. Matilda Cuomo and sister to current New York Governor Andrew Cuomo and ABC’s Chris Cuomo.

Dr. Cuomo has observed first-hand the issues related to current treatment methods. Recognizing the lack of significant progress in the prevention of cancer, she wrote this book, which reveals how profit, politics, and personal ambition have hindered progress in cancer research and prevention. Dr. Cuomo interviewed 60 experts across the country and pored over hundreds of studies to analyze why we have lost so many lives despite $90 billion in federal funds spent over the last 40 years on cancer research.

What Did She Say?

Here Are What She Said About Cancer Prevention

1. Attention to diet – Your “daily plate” should contain two-thirds whole grains, vegetables and fruits, and one-third lean protein, including poultry and fish. Cruciferous vegetables, including broccoli, cabbage and cauliflower contain cancer-fighting compounds. Green leafy vegetables such as spinach, kale, and collard greens also have anti-carcinogenic activity. Cooked or processed tomatoes, including tomato juice and tomato sauce, contribute lycopene to your diet, which is a powerful antioxidant.

Berries such as strawberries and raspberries contain the cancer-fighting ellagic acid and blueberries are powerful antioxidants. Add the spice tumeric to your meals – which is being studied for its cancer-fighting properties.

Red meat should be eaten sparingly and processed meats should be eliminated from your diet. Avoid added sugar in beverages and avoid processed foods as much as possible. Buy organic products whenever possible. It’s a good investment in your good health.

2. Limit alcohol consumption – Alcohol has been linked to cancer risk. No more than one drink a day for women, or two drinks a day for men.

3. Stop smoking – which causes cancer for the smoker, and the person exposed to second-hand smoke.

5. Exercise daily – Exercise is good for your mind and body. Overweight and obesity are known risk factors for cancer, as well as heart disease and diabetes. Keep physcially fit, and maintain a healthy weight.

Include physical activity in your daily life  – climb stairs instead of taking the elevator, or walk a few blocks rather than taking a subway or driving. Be a good role model for children – take frequent breaks from your computer – pace while on the phone – do jumping jacks – all of this can be done in your home or office.

6. Read labels on your consumer products and food packaging. If plastic bottles containing water or other beverages, or food containers, contain the number 3, 6, or 7 within a small triangle imprinted on the bottle or package, it contains BPA – a weak estrogen classified as an “endocrine disruptor,” that has been linked to breast, prostate, and ovarian cancers.

7.  Read the labels on your cosmetics, body washes, shampoos, toothpaste, and other personal care products , and do not purchase any that contain harmful chemicals such as parabens, pthalates, and triclosans. Good news: In August, 2012, Johnson and Johnson becamse the first consumer product company to commit to removing a variety of chemicals, including the known carcinogen, formaldehyde, from its consumer products (including its subsidiaries Neutrogena, Clean and Clear and Aveeno) by 2015. Hopefully, other major consumer product and cosmetic companies will step forward to follow this important initiative to protect the public’s health.

(Note:  This general advice on diet is for those who are still healthy and are not cancer victims yet.  For cancer patients your diet will be much more restricted. No, cancer patients just cannot eat what you like. No, what you eat has everything to do whether your cancer is going to recur, spread or healed).