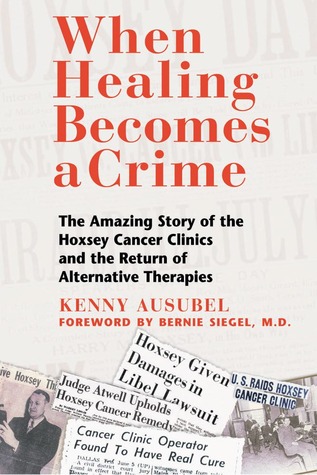 Yes, in America, healing is a crime when you do not use the “FDA approved, scientifically tested, and evidence-based” modalities like surgery, radiotherapy and chemotherapy as far as cancer treatment is concerned.

This book by Kenny Ausubel, an award winning author, investigative journalist, and filmmaker documented the horrendous, undemocratic, high-handed way the American Medical Association (AMA), the Food and Drug Association (FDA) and the National Cancer Institute (NCI), hounded Harry Hoxsey and the Hoxsey Clinics from 1924 until he was driven to Mexico in 1963. Hoxsey survived decades of being “hunted like a wild beast” only to see his clinics padlocked without a scientific test.

The author decided to spend 20 years of the prime of his life researching a story that everyone needs to know. In 1976, his father had cancer. Six months later, at age 55, he was dead. Visiting his father in Memorial Sloan-Kettering Cancer Centre in New York, the flagship of conventional cancer treatment, “branded his psyche with the indelible imprint of a medical concentration camp. Hopeless patients in blue smocks hovered like phantoms, their emaciated bodies ravaged by radiation and chemotherapy.”

Kenny started his journey into “the subterranean netherworld of purported cures” after a friend gave him a copy of “You Don’t Have to Die” the self-published autobiography by Harry Hoxsey (apparently, no book publishers dared to accept the script). This journey resulted in this well-documented book and a movie with the same title. The book is not an easy read, with lots of details to follow. After reading this book, the reader will have an increased awareness of the power of the medical profession …or more specifically “the cancer establishment.”

Briefly, Harry Hoxsey’s cancer treatment is one of America’s most documented non-conventional alternative treatments of cancer. Passed down through his family from his great grandfather, this herbal formula peaked in US in the 1950s and flourished into Harry’s 14 cancer clinics across the United States. Harry Hoxsey had the largest privately-owned cancer clinic in the world, seeing more than 10,000 patients in Dallas alone. To this day, his treatment is still available through the Bio-Medical Center at Tijuana, Mexico.

In this review, we shall not delve into the nature and efficacy of the Hoxsey herbal formulas. The persistent harassments by the medical establishment from 1924 to 1963 are sufficient testimony of the effectiveness of the Hoxsey herbal formulas. Why does the medical establishment need to “hunt Harry Hoxsey like a beast?” Because the AMA was adamant in its conviction that only surgery and radiation were able to cure cancer, even though cancer researchers already knew that these treatments were very limited in their effectiveness.

Harry Hosey suffered 40 years of harsh attacks in the press, relentless prosecutions in the courts and persecution by government agencies. Below is a brief summary of what the AMA did to Harry Hoxsey and the Hoxsey clinics:

Perhaps, the greatest fear of the AMA (and later the NCI and FDA) is to find that…”if a Hoxsey product were to be proven effective, the public will run to it because nobody wants the chemo drug.” Because once one goes through the door, then a lot of others are going through the door and that’s what they are afraid of. If chemo is the only choice, then patients will reluctantly take it, but the minute it is known that there is something nontoxic out there, everybody’s going to want it. (While the FDA has approved more than 40 highly toxic drugs, the FDA has yet to approve a single nontoxic cancer agent or one not patented by a major pharmaceutical company).

Hoxsey unremittingly broadcast his call for a fair investigation while organized medicine tried to disconnect the microphone. In 1954 ten medical doctors from around the country dared to make a three-day investigation of the Hoxsey clinics and subsequently concluded that….”the Hoxsey treatment is superior to such conventional methods of treatment as X-ray, radium, and surgery”

Unable to get patients to testify against Hoxsey, the AMA resorted to other tactics…for example:

After the AMA has lost all the court cases, they offered to buy out the Hoxsey herbal formulas (with the sinister intention to discredit/destroy the reputation of Harry Hoxsey). When Hoxsey refused to sell them (the AMA), organized medicine’s war of technicalities expanded into a bold series of stratagems to get rid of Hoxsey. Some of these are:

Organized medicine’s scorched-earth campaign to eradicate unorthodox cancer therapies was a success by 1960, when the last tattered vestige of the Hoxsey Cancer Clinic closed its doors forever in the United States.

On May Day 1963, Mildred Nelson, the chief nurse of Harry Hoxsey crossed the border into Tijuana, Mexico and started offering the herbal treatment at the Bio Medical Center. Mildred Bell Nelson applied to the Mexican authorities for a nursing license and married a Mexican to get working papers. Nurse Mildred Zamora was back treating cancer patients again.

When Mildred went into exile in Tijuana, Harry Hoxsey stayed back in Dallas. By then he was a wore-out car. After suffering a heart attack in 1958, he was never fully well again…he later developed prostate cancer and subsequently died in 1974.

Mildred Zamora continued Harry Hoxsey’s mission in Tijuana until she had a stroke which resulted in her death in January 1999 at the age of 80.

Does the Hoxsey herbal tonic really work? There were just too many people using the Hoxsey herbal formula and got well when they weren’t supposed to for it to be accidental or rampant good luck (or spontaneous remissions). Why was the Hoxsey tonic not investigated in the first place seventy-five years ago?  And yet the AMA and NCI can conclude that the nontoxic combination of herb extracts as “worthless tonic for cancer.” Is that based on sound scientific evidence or they just do not want a nontoxic cure to be found?

We invite you to be the judge.

To complete the story, we recommend that you watch the following video on YouTube…..WHEN HEALING BECOMES A CRIME by Kenny Ausubel (Link: http://www.youtube.com/watch?v=G45f8bNgj9w).  A summary of the Hoxsey herbal therapy can be read at the following link: http://true-wellness.com/twmedia/articles/hoxsey_form_can.pdf

If you Google the title of the book, there are a lot more information about “the politics of cancer” to enlighten you.