Continuing our search to find answers to what radiation therapy does to the body, we re-read Chapter 4 RADIATION THERAPY: BURNING CANCER found in the best-seller “NATURAL STRATEGIES FOR CANCER PATIENTS” by Dr Russell Blaylock, MD. He was a board certified neurosurgeon and neuroscientist and was the Clinical Professor of Neurosurgery at the Medical University of Mississippi. ( http://www.russellblaylockmd.com/) 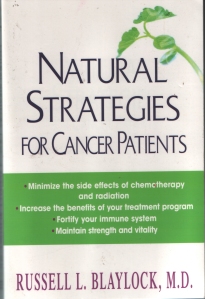 Dr Blaylock’s comments gave us further insights into the hazards of radiation therapy. Some salient points in the chapter are:

The nervous system is not the only tissue that can be damaged by scatter radiation. Most vulnerable are the cells lining the gastrointestinal tract, as well as the cells of the bone marrow, lymph system, spleen, and hair follicles. This is because these are all rapidly dividing cells, easily damaged by radiation.

It is extremely tragic and incomprehensible that the medical (or cancer) establishment still uses ionizing radiation that is clearly proven and known to be carcinogenic (as established by the International Agency for Research on Cancer).

It is also inconceivable that such conventional cancer treatments should cause so much pain, agony and money and then the patient has to suffer another form of cancer, heart disease or disorders to the bones, etc. Hence the cycle of treatment has to be repeated.

Is this why conventional cancer treatments have been referred to as “the Cancer Industry?” Is this healing or is it “legalized” ???? We welcome your opinion.

To conclude this article, we recommend that you read Dr Blaylock’s article which described…HOW MODERN MEDICINE KILLED MY BROTHER…at the following link: http://www.wnho.net/medicine_killed_brother.htm