A healthy looking 82-year-old man (let’s call him K) and his family members came to seek our help.

His problem started a few months ago when he had coughs and fevers. He went to a university hospital for consultation.

A CT on 29 Sept. 2017 shows a 5.2 cm HCC in segment 8 of his liver. In addition there are nodules in his lung, suggestive of bronchogenic carcinoma.

A repeat CT scan was done at the same university a month later, on 20 October 2017.

The report confirmed the presence of 4.8 cm segment 8 liver mass (previously 4.6 cm). This statement implied the mass has grown in size.

The right lower lobe of lung with numerous nodules as well as the rest of the lungs are still present.

The report concluded with this words: “lung malignancy with lung and liver metastasis needs to be considered. A separate HCC is also a differential diagnosis, as previously noted.” 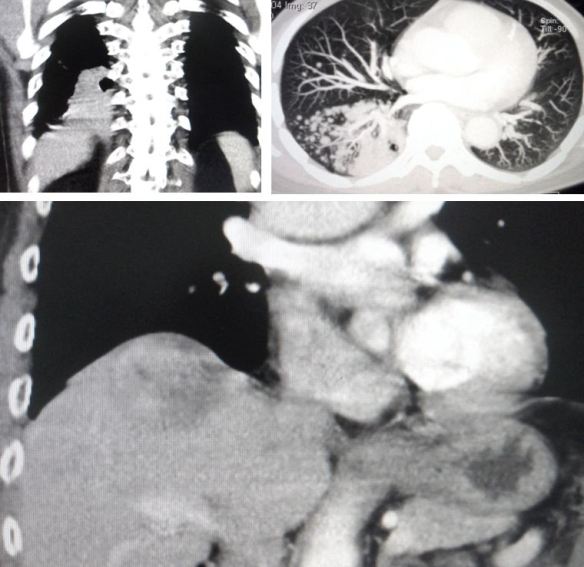 The following are some of the points we discussed that morning.

How effective is RFA?

RFA is a technique that uses high frequency electrical energy that creates heat, delivered through a thin instrument or probe, to destroy tumors.

It is used primarily to shrink or slow down the growth of hepatocellular carcinoma, and is not considered a curative procedure, although survival rates are good. It is used in liver cancer patients who are not good candidates for surgery Source: https://www.everydayhealth.com/liver-cancer/liver-cancer-tumor-ablation.aspx

RFA is best used for tumors no larger than about 3 cm across (a little over an inch). Source: https://www.cancer.org/cancer/liver-cancer/treating/tumor-ablation.html

Small tumors are generally best suited for RFA and provide the best results. However, larger lesions have also been ablated with mixed success. Small lesions are generally considered those that are <3–3.5 cm in diameter.

Overall survival rates were reported to be as high as 89% and 62% at 1 and 3 years, respectively, in a group of patients undergoing RFA for lesions <3.5 cm. Unfortunately, a disease-free survival rate of 24% at 3 years is less encouraging, with local recurrence playing a large role in disease relapse. However, most patients who recur locally are able to undergo repeat RFA.

Larger lesions are known to be more difficult to treat using RFA. Tumors >3 cm often require repositioning of the electrode or multiple treatment sessions in order to obtain clear margins. However, even using a more aggressive approach, the efficacy of RFA has been proven to be limited by tumor size. Lesions measuring >5 cm have at best only a 50% chance of being completely ablated. Therefore, most authors do not recommend the use of RFA for tumors >5–6 cm because of the technical limitations of the current equipment used and their inability to provide complete coagulative necrosis. Source: http://theoncologist.alphamedpress.org/content/11/7/801

Apart from RFA are there any other options?

K went to see a surgeon and was advised to undergo a surgery — “cut off” the tumour! That is to be expected, After all that is what he does every day for a living. Can surgery cure? That’s something else.

Another possibility is TACE. Will it cure? Not likely too.

What about going to China and undergo cryoabalation? Cryoablation is a similar procedure as RFA except it freezes the tumour instead of “burning” it.

The ultimate is liver transplantation. It would cost RMB 1 million and requires a 2-month hospital stay in China. If you don’t want to go to China, try the procedure in Singapore.

From the literature we know that to get best result from RFA, the tumour has to be small — less than 3 cm. But the tumour in K’s liver is 5.2 cm. Too big for optimum result. But you can always try your luck.

I asked K. Even without any treatment now, you are still healthy. What if you do nothing and can still survive another 3 to 4 years? You don’t have to die yet, even if the doctors have found out that you are “sick”.

What about the side effects of the treatment?

So far our discussion is only about treating the 5 cm liver tumour. Everyone is so obsessed about this, as if this is the only problem that K is facing. No, there is also cancer is his lung. According to the medical report it is a metastasis. K refused to undergo a biopsy.

According to K’s son, this lung tumour has been there for the past 3 to 4 years. Two doctors who examined K earlier said it was not cancerous! Well, the latest CT scan does not appear to support that idea.

Treat the liver tumour with RFA but ignore the lung tumour? Does that make sense?

Do the RFA and at the same time treat the lung with chemotherapy? Havoc?

At CA Care, we try to teach you how to think. If you think that the doctors can help you, go ahead and undergo the treatments they suggested. If you don’t want to undergo medical treatment, you can take the herbs. But know that we do not guarantee that we can cure your cancer, because we know that no one on earth can cure any cancer. But no cure does not mean that you need to die tomorrow.

Reflect on these quotations:

It is indeed surprising that K, his son and sister came back to see us again a week later. The family wanted to try our herbs. They decided not to go for RFA. It does not cure anyway.