Daisy (not real name) is a 42-year-old Indonesian. She had a 5 x 3 cm cancerous tumour in her cervix. She underwent an operation to remove the tumour in November 2016.

After the surgery, she told her doctor that she did not want to go for chemotherapy. She wanted to take herbs instead. Okay —  no problem!

Daisy was well after that. She used to be “plump” but after taking care of her diet her weight went down to 59 kg from 76 kg. She looked fairer and prettier!

On check up in July 2017, her doctor found a cyst in her abdomen about 48 mm in size. The doctor suggested there was no need to do anything yet, just wait and see.

In November 2017, a repeat USG was done in Batam, Indonesia. The doctor told Daisy the cyst was still there and it measured 37 mm.

At this point in time, I prescribed Daisy herbal teas — GY 5 and GY 6. Hopefully the teas will get rid of the cyst!

In April 2018, Daisy came to our centre with a smiling, happy face! She just went to her doctor in Batam and did a second USG. The cyst was gone! 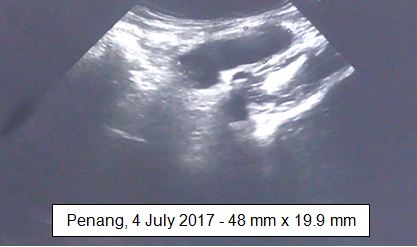 Listen to our conversation that morning.

Chris: Okay, how are you now?

Daisy:  A few days ago, I went to my doctor and did an USG. The cyst is gone.

C: God helped you! Before the herbs, what was your problem?

D: When I bend forward, I felt pain. Now there is no pain.

C: Earlier on, you said you had “twisting” pain in the abdomen when you were tired.

C: Some months back, an USG showed there was a 4 cm cyst. Then another USG later said it was 2.7 cm. and now it is gone. How long were you taking the herbs?

C: Is it true or not, I really don’t know. Did the doctor know that you had a cyst in there? Did the doctor ask you what you did to make the cyst do away?

C: Okay, after another 2 or 3 months, go and do another USG.

D: The doctor told me to come again after one year!

C: Laugh. You can go to another doctor and ask to do another USG. Don’t have to go back to the same doctor. We just want to know that the last USG is really correct or not. So let’s see what happen after another 2 or 3 months.

There is nothing unusual about this case. We have seen that our herbs, GY 5 and GY 6, each tea taken once a day, did make cysts go away after a few months. No, you don’t need surgery for such a case!

Update: As I have suspected, some months later USG found the cyst again. Why? It is most likely that the followup USG done by the doctor was NOT correct! The doctor gave the wrong information? Yes, this do happen once a while.