SH is a 62-year-old Singaporean. Many years ago, his father had lung cancer. He underwent chemotherapy and according to SH’s wife, “it was very fast, within a year he died. He had chemo.”

Fast forward to early 2018.  SH had difficulty moving his bowels which led to pains in the abdomen and loss of appetite. The problem persisted for some six months.

Sometime in June 2018, SH went to a government hospital and did a colonoscopy. There were some polyps. USG showed “air bubbles” in the intestine. Nothing was done and SH was asked to go home. Not satisfied, SH went to a “well known” private hospital (in Singapore). A CT scan was done, followed by a biopsy.

SH was told he had pancreatic cancer, Stage 3. The cancer might have spread to the small intestine.

I am SH from Singapore I want to check with you how can I come and consult you in Penang?

I have done a CT scan and  found to have “abdomen/pelvis: mass in neck of pancreas, encroaching the portal vein causing portal obstruction with cavermosum formation. Also abutting hepatic artery and SMA”.

May I know how to make an appointment to see you? I look forward to your reply.

My reply: Go and see the doctors first and find out what they can do for you.

Thank you for your advice. I will discuss with my doctor first. I understand that he recommends chemo followed by surgery. I will come back to you once I have gone through the treatments and assess my health condition.

From 11 July 2018 to 9 July 2019, SH underwent chemotherapy. This was done at the clinic of a “famous Singapore oncologist”.

In total, SH received 11 cycles of chemotherapy using the drugs, Gemcitabine + Abraxane. This is the standard recipe used to treat advanced pancreatic cancer.

I am SH from Singapore. I contacted you in July 2018. You asked me to see my oncologist first. I did that. I would like to visit you to seek alternative herbal treatment. I have completed 13 chemo sessions for treatment of my pancreatic cancer. Please advise how to make appointment to see you?

Can I come to see you in November (date to be confirmed)? My chemo treatment is not working for me. I will not hold you responsible. I am desperate to seek alternative treatment. Can you agree to see me? Thanks.

When SH came to seek our help in November 2019, he said he had learned from his father’s bitter experience about chemotherapy. From the beginning he was not happy to undergo chemotherapy but he had no choice. In the end, he decided to give up chemotherapy because of the severe side effects.

Did chemo and radiation treatments cure his cancer?

Take a look at the CA19.9 values during the course of his treatments: 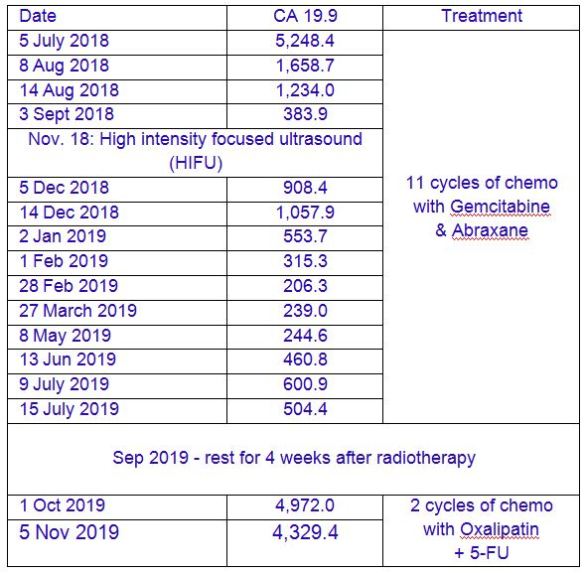 SH was scheduled for a third cycle of chemo in mid-November 2019 but he decided to give up further medical treatment.

In fact SH was told that if he was to continue with chemotherapy, the drugs to be used would be changed to: 5-FU +irinotecan or 5-FU + irinotecan + oxaliplatin.

If you check the internet, Olaprarib is a drug used to treat ovarian and breast cancer!!!!!!!

How much does Olaparib cost? In the US, the cost of Olaparib (internet information) is estimated to be USD3,000 per month!

Below are the results of the PET scan done on 1 October 2019 (top row) compared to the one done on 15 July 2019 (bottom row). It is obvious that his cancer did not go away in spite of the treatments given. 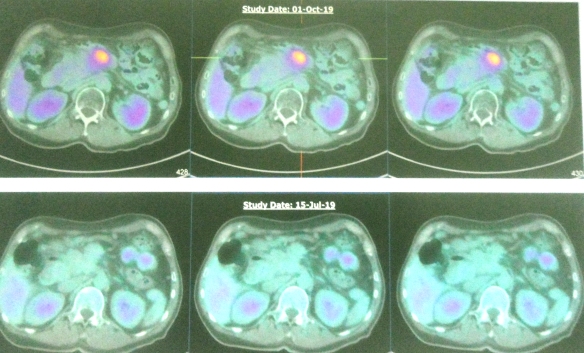 One question I asked SH (and his wife). Before you undergo the chemotherapy, did you ever ask the oncologist if the treatment is going to cure you? Yes, they asked that question. And the answer was, “No, cannot cure. It is just to prolong life or to promote quality of life.”

Is that what patients want — no cure but prolong life? Ask these questions — prolong life for how long? And at what cost in terms of suffering or money?

What about chemo promoting quality of life? Someone must be joking! SH said, “spend money is okay” but it is the suffering that he could not endure.

At the end of it all, ask yourself, Is it worth it? I can’t answer that question – only the patient who suffered the consequences would know better.

I always tell patients, understand that the decrease of tumor markers (in this case CA19.9) is meaningless! But many patients don’t want to understand this. To them if the tumor marker comes down, it means the treatment is effective! So patients like to go for blood test or do a CT scan soon after each or a few shots of treatment. Some even do the most crazy thing — doing a PET scan every month!

Let us look at SH’s case.

So go for more and more chemo — good, isn’t it?

But was that really wonderful? Don’t be fooled. If you have enough experience or if you are observant enough, know that this decrease of tumour marker may not last. It could be just an illusion; a temporary relief and a good start to make patients excited and spend their money. But it may not last. I have seen enough cases like this happen.

It was at this point that the doctor told SH that the Gemcitabine + Abraxane concoction did not work anymore!

SH needed to be given another “magic” concoction of Oxaliplatin + 5-FU (or + irinotecan).

But what is most bewildering about this drug is that it is meant for ovarian or breast cancer!!!!  Has someone forgotten that SH has pancreatic cancer? That being the case, how good can this new drug be for SH?