Almost every day cancer patients write or come to me for help. For the past few weeks, I saw cases after cases of colon cancer. The cancer cases come in a non-random, wave-like patent. It looks like these past weeks is a “colon cancer season.” Indeed I find this strange and unexplainable.

I have already written two cases of colorectal cancer earlier! And now I am going to share a few more cases with you.

SE is a 62-year-old Malaysian lady. About three months ago she passed out blood in her stools. She went to private hospital and did an endoscopy followed by CT scan of her abdomen and pelvis.

The doctor suggested surgery. According to SE’s son, the whole treatment would cost about RM 60,000 (if done in a private hospital). SE has no money and she is not covered by any health insurance. SE was subsequently referred to a “government-sponsored hospital” for further treatment.

SE underwent surgery in December 2019. One of the 11 lymph nodes removed was involved. But the cancer has not spread to any other organs. SE was told it was a Stage 3 cancer.

In all, the operation in this “government-sponsored hospital” cost about RM3,000 (against RM60K in a private hospital).

SE was told to undergo follow-up chemotherapy. Since SE did not speak English, the doctor wrote his recommendation on a piece of paper (see below). He suggested that SE go home and discuss this matter with her family members. 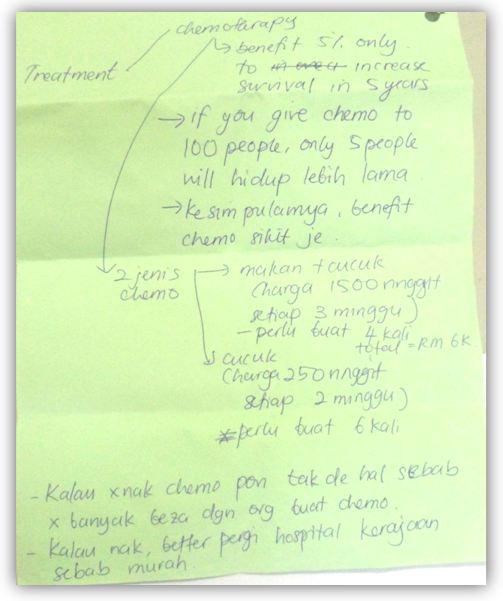 I was indeed shocked to read this note from her doctor (of this  “government-sponsored hospital”). My first reaction was to SALUTE this honest doctor! Thank you Doc., for being very honest and up front with your patient.

SE and her family decided not to undergo chemotherapy!

Let me ask you this question: Given that to do chemo or not to do chemo makes no difference! And 5 patients out of 100 would benefit from the chemo-treatment. What would you do if you were in SE’s situation?

It looks like, if doctors were to give their patients honest information (perhaps based on their own experiences and reading of medical journals) most patients would run away from chemotherapy. If this happens, cancer industry is no more a lucrative billion-dollar industry.

Many of you may want to dispute what SE’s oncologists said! How could it be — only 5 percent benefit only? How could it be, to do or not to do chemo is about the same? If don’t want to do chemo also, ok! What kind of oncologist is that? My answer is: This is the very honest kind of oncologist. Don’t get angry at him. What he said is very true. Instead let us salute him for being honest. The world needs such doctors!

Let me ask you to reflect on the quotations below:

Colon Cancer Part 2: What if no chemo?