Martha is a 33-year-old lady from Aceh, Indonesia. In 2017, she had a swelling in the right side of her neck. She did nothing about it because she was pregnant at that time. She had no problem and went to give birth. It was only after the delivery of her child that problems started to crop up. She started to have fevers. The doctor prescribed medication but the fevers did not go away. Then she started to cough.

After an X-ray of her chest, the doctor said there was a “swelling” in her lung. A biopsy was done and the problem was said to be due to Hodgkin’s lymphoma.

Not satisfied, Martha  went  to Kuala Lumpur for a second opinion. A surgery was done to remove a lump in her chest area. Again, she was told that she had Hodgkin’s lymphoma. 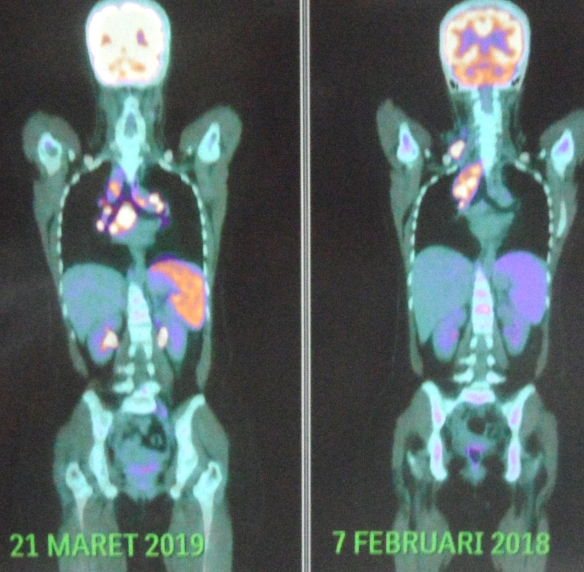 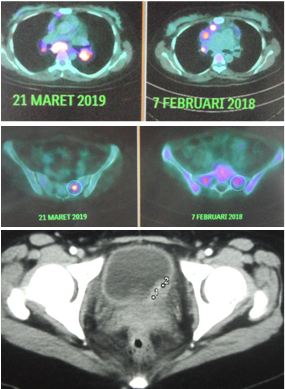 This time, Martha decided to undergo chemotherapy in her hometown, Aceh. The chemo regimen used was ICE-Mesna (Ifosfamide, carboplatin, Etoposide and Mesna).

Martha became breathless after one shot of this chemo. She said, I felt that I was dying. In addition to her breathing problem, Martha passed out blood in her urine. She also passed out a lot of blood clots.

The second cycle of chemo was scheduled for 5 June 2019, but Martha decided to give up her chemo treatment. She and her husband came to seek our help on 3 June 2019.

Chris: When you first did the chemo, did you ask the oncologist if this treatment was going to cure you?

Martha: The oncologist in Medan (where she received 8 cycles of chemo) said, Yes. There is a 90 percent chance of a cure! But I cannot eat sugar and milk.

C: After the shot of chemo in Aceh, you passed out blood in your urine. And there were also blood clots. Did the doctor explain why you had this problem?

Lessons we can learn from this case.

Martha had a total of 10 cycles of chemotherapy. Did the treatment cure her? No. She was asked to undergo another 6 cycles. She did one cycle and decided to give it up. What could happen if she were to continue with the other 5 cycles? Would she be alive? Cured? No one can tell for sure.

While undergoing her chemo in Medan, Martha was told that with chemotherapy she would have a 90 percent chance of cure. What happened now? No, the cancer recurred just after the treatment was completed.

After the relapse, Martha was asked to undergo another 6 cycles of chemo. This time she need not have to travel far. Let’s do it in Aceh, her hometown. What happened after one shot of chemo? In her own words, she said she felt like dying. She became breathless and she passed out blood in her urine. Do you know why? These are the side effects of the chemotherapy that she had.

Common side effects of ICE-Mesna chemotherapy.

Why was Martha bleeding after just one shot of ICE-Mesna? It is well documented that the chemo-drug Ifosfamide can induced bleeding, a condition known as hemorrhagic cystitis (HC).

A report said, in early trials, large single ifosfamide doses produced gross hematuria in 100 percent of patients. In other studies, the reported overall incidence of HC among patients treated with fractionated dosing of ifosfamide without urothelial protection ranges from 18 to 40 percent. In contrast, when ifosfamide is administered with the uroprotectant mesna, gross hematuria is uncommon (occurring in <5 percent of cases), and microscopic hematuria alone occurs in 5 to 18 percent of courses.

Unfortunately, in the case of Martha, even the addition of Mesna to her treatment protocol did not prevent bleeding caused by ifosfamide.

In an article in the Washington Post, Rachel Cernansky wrote:  .. a doctor may not be a reliable source. Experts say that while most physicians may recognize that diet is influential in health, they don’t learn enough about nutrition in medical school or the training programs that follow. An estimated 50 to 80 percent of chronic diseases, including heart disease and cancer, are partly related to or affected by nutrition, according to Martin Kohlmeier, a research professor in nutrition at the University of North Carolina at Chapel Hill.

Nutrition is a major issue for most patients with cancer and their families …Unfortunately, receiving correct information is still under-addressed by healthcare professionals, notwithstanding it’s a primary right of the patients. The lack of guidance will often lead to doubtful ‘self-management’ strategies.