MM is a 45-year-old housewife. She came to us for problems of backache and severe pain during her periods (her story in another article). As with all patients we read her meridian energy using the AcuGraph (below).  Only 3 of the 12 meridians were normal (green), 5 meridians were split and 4 meridians were low. 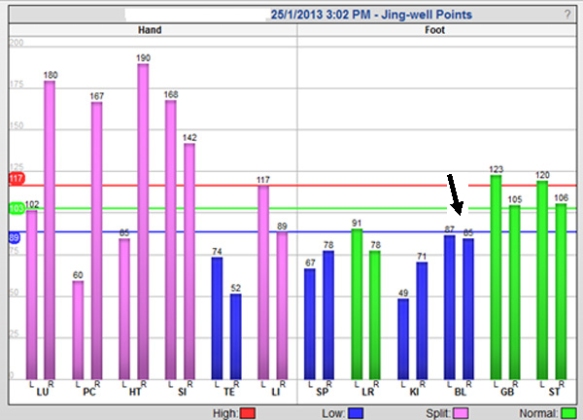 From our experience, those with low or split bladder meridian (BL is blue, arrow) may have problems of frequent urination at night.  (See our previous article: http://ejtcm.com/2011/03/25/low-or-split-bladder-meridian-may-result-in-frequent-urination/). In addition, she also had low KI (kidney) and SP (Spleen) meridian energy.  The significance of this is explained below.

We asked MM if nocturia was also her problem. Her answer was YES – urination 3 to 4 times each night. It is indeed a nuisance having to waking up so often, besides depriving her of a good sound sleep. We suggested that MM take the herbal tea, A-Kid-6, for 2 weeks to try and resolve her problem.

We got to met MM again 2 months later and she told us her nocturia was resolved after taking the herbal tea. Listen to what she said below:

TCM views the kidney and bladder as an interrelated pair that controls water in the body.  The function of the bladder – i.e. storage and discharge of the urine, depends upon Kidney Qi. If Kidney Qi is sufficient the bladder will function normally and urination is well controlled.

If Kidney Qi is deficient the bladder becomes dysfunctional. Disharmony of the Bladder meridian can lead to problems such as difficult urination, incontinence (inability to control proper urination), painful eyes, runny nose, nose bleeding, nasal congestion, pain in the head, neck, back, groin and buttock.

According to Steven Clavey (in Fluid physiology and pathology in TCM) nocturia is due to exhausted kidney yang or spleen and kidney yang deficiency. However, in cases where the symptoms are less severe, nocturia can be due to Bladder qi deficiency.

Acknowledgement: We record our sincere thanks to Dr. Adrian Larsen, President of Miridia Technology Inc., USA, for his generosity in providing a unit of AcuGraph 3 for our research at CA Care.