DS-M906, is a 69-year-old female from Indonesia. Sometime in July 2009, DS had problems with her stomach. She consulted an internist at a private hospital in Medan. A biopsy was performed and the result indicated an adenocarcinoma, i.e. cancer of the stomach. After this examination, DS decided not to do anything. Her problem escalated and she suffered more pains.

In December 2010, DS went to see another doctor in another private hospital in Medan. A biopsy was again performed. The histopathology result indicated a moderately differentiated adenocarcinoma. Not satisfied, in January 2011, DS came to a private hospital in Penang for further consultation. A CT scan did not show any focal lung lesion. Her abdominal organs were normal. A colonoscopy showed simple haemorrhoids while the rest of the bowels were normal.  A biopsy of the pre-pyloric region was performed. The result indicated signet ring-type adenocarcinoma. There was also Helicobacter pylori associated chronic active gastritis. In short, for the third time, DS had been told that she had stomach cancer. 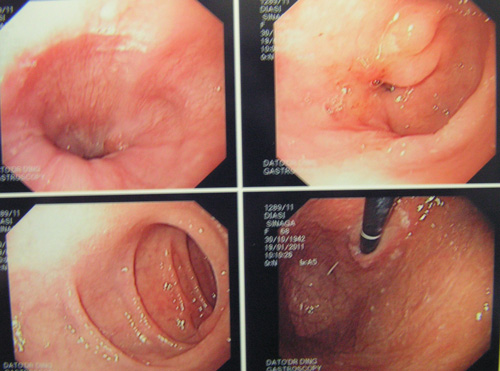 The doctor in Penang suggested two options – DS take medications or undergo an operation. DS declined further medical treatment and came to seek our help on 21 January 2011. Below is the video recording of our conversation.

Comments: Since DS and her children had already made the decision not to undergo any surgery, DS had no other choice but to take our herbal teas. We cautioned her to reconsider her decision to decline surgery. She was adamant that she did not want any medical treatment. One of her children said: “After surgery, she has to undergo chemotherapy. And we know that is not the thing we want to do.”

We posed this question to DS – and for that matter, to all patients. If she has already decided not to undergo surgery after a biopsy, why does she do one biopsy after another? It is understandable if only one biopsy is done – to determine what has gone wrong. But what does she expect to get by doing three biopsies?

This is one peculiarity we often notice among Indonesian patients. They come to Penang – bring all the money that they have. They spend their money on blood test, X-ray, CT scan, PET scan, biopsy, etc.  When they are told that they have cancer and need to medical treatments, some of them just pack off and go home the next day.  Is this not wasting money unnecessarily? Is there any logic in doing such thing?

This is our message to patient: Iif you don’t want to proceed with medical treatments recommended by your doctor, there is no need to do a biopsy. A biopsy is done to confirm if you have cancer, so that you can move to the next step – be it surgery, radiotherapy or chemotherapy. If you did not want to do any of these, why do a biopsy?

Again we say – before doing a biopsy, ask yourself first: If it is cancer, do I want to undergo surgery / chemotherapy / or radiotherapy? If you agree to such treatment, go ahead with the biopsy to be sure that it is really cancer. But if you do not wish to undergo further medical treatment as in the case of DS, why do you spend so much of your money doing the biopsy in the first place?

Granted – some patients say, the medical treatments are expensive and they cannot afford it. Or,  some may say they decline medical treatments because the doctors cannot guarantee a cure.  If these are your concerns, why don’t you ask the costs first or ask for a guarantee first before doing anything?