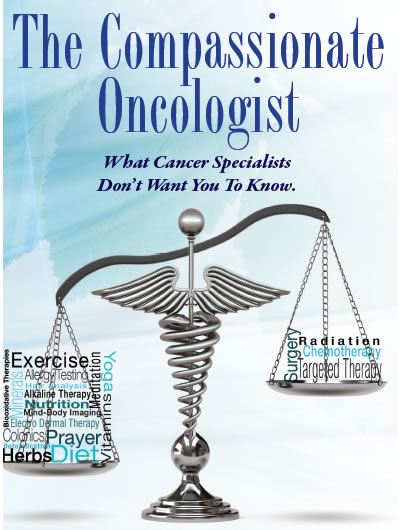 For more details go to: http://www.drforsythe.com/images/stories/pdf/july2011.pdf

1) The Author:  This book is written by Dr James Forsythe. He earned his MD from the University of California at San Francisco. He is a board-certified oncologist and also a board-certified homeopath which makes for an interesting mix of Western and alternative medicines. The combination of the two allows Dr. Forsythe to be extremely creative in his approach to cancer. He is an integrative oncologist providing “the best of what both worlds have to offer.” Today, Dr. Forsythe enjoys a successful career as a medical oncologist who utilizes alternative treatments ~ Extracted from Knockout by Suzanne Somers, pg. 121).

2) What he does:  For more than 20 years, he has been interested in integrating alternative complementary and conventional medicine. Among medical professionals nationwide, Dr Forsythe has served as a highly respected leader in pioneering the combination of conventional, alternative and complementary medicine. His clinical and laboratory results show that, cancer patients who do integrative therapies have a greater likelihood of surviving with less toxic outcomes than those who choose conventional treatment alone.

3) What the Book is about: Dr Forsythe gives mind-blowing recommendations that many cancer specialists hope that you will never know about. In the book, he shocks the medical industry again by blowing the lid off the techniques used most often by standard cancer specialists to combat cancer. Do you realise that many standard oncologists know that certain cancer treatments including some chemotherapy regimens are likely to fail, but they never tell you beforehand?

Below is a summary of the main points in the book:

1) In the introduction chapter, Dr Forsythe explained “Why I Abandoned Conventional Oncology.” Why was he so disillusioned?

a)      We knew that the chemo was killing good cells, but we just hoped that it was killing enough bad cells too. All of the patients become horribly sick from the chemo and they were all miserable. Most of them also relapsed with cancer within a few years (page 16).

b)      During training, Dr Forsythe discovered how arbitrary the cancer protocols was…there was never a consensus about treatment (page 17). There are more than 100 “approved” cancer drugs…and there is no consensus on which drugs to use, what doses to use, how long to give them, or which types of cancer respond best to those drugs. All of these decisions are made arbitrarily and that turns patients into virtual guinea pigs. What conventional oncologists do agree on, however, is to attack the cancer with toxic drugs using the “slash and burn” approach, never deviating from the standard protocols (page 18).

c)      The biggest epiphany for Dr Forsythe come from the cancer survival rate numbers….”we were seeing only 2% of stage 4 cancer patients surviving after repeated rounds of slash and burn treatment.” His observation were confirmed in “The Journal of Oncology” in 2004 which reported that “in a large retrospective study, the overall survival rate for patients with stage 4 cancer receiving chemotherapy was only 2.1% in the US and in a similar study done in Australia showed only a 2.3% survival rate” (page 19).

d)      The above finding showed me (Dr Forsythe) that the over treatment approach and the treatment protocols using so many toxins constituted a failing strategy. Even if you were lucky enough to be one of those two out of a hundred who survived, you will have chemo brain symptoms, you might have heart and liver problems, and you would probably experience constant pain and the loss of feeling in your feet and toes (page 19).

f)       The quality of their lives, even though they may have survived cancer, was often times very dismal and Dr Forsythe wondered if it was “worth the price” for survival. There was an old saying at Oncology meetings, “We cured the cancer, but the patients died”(page 20).

g)      Under this prevailing dogma (Big Pharma’s indoctrination and drug-obsessed dogma), if you receive a heavy dose of chemo and you die after this first treatment, that would be considered okay because the oncologist did everything by the book. The oncologist has no liability as a result (page 21).  (Comment: In other words, you can get murdered and yet you have to pay for it as well)

h)      I, (Dr Forsythe) know from first-hand experience that oncologists and physicians aren’t allowed to talk about supplements or diet as part of cancer treatment. Their protocol is chemotherapy, using exact doses by the book, and when you have nausea or other side effects, they give you another drug for that and expect you to be content with the consequences (Comment:…and you pay for it as well)  (page 22)

i)        Another factor that disturbed me (Dr Forsythe) was the escalation in patient treatment costs especially when they are directed to use toxic or ineffective cancer drugs following cancer…this amounted to a royal fleecing of people who have been rendered vulnerable and fearful by the prospect of a painful death (page19).

j)        If I (Dr Forsythe) am giving you chemo that isn’t working, then I am just giving you a poison. It’s a waste of your time, your money, and your immune system’s precious resources. Meanwhile, your cancer is left to continue its deadly growth (page 22). (Comment: Where to find such a compassionate oncologist in Malaysia??)

2) In Chapter 3, Dr Forsythe described the “Treatments They Will Offer you” and the prospects is very frightening. Some comments on the effectiveness of chemo drugs are:

a)      Unbeknownst to the patient…the conventional oncologist cannot and does not know for sure whether any of the treatments being proposed will in fact work for that specific patient’s cancer. The reason for this is that he is basing all of his recommendations upon the latest clinical studies, none of which ever reveal a 100% response rate, so he does not inform the patient that there is a possibility that none of these therapies could work for the patient’s specific cancer (page 42).

b)      While most independent and well-meaning oncologists base their therapeutic decisions for first, second, or third line chemo drug protocols on the results of the latest published studies, or on the yearly presentation given at the prestigious American Society of Clinical Oncology meeting, often it is akin to entering a dark room with a handful of darts and hoping to hit the centre of the dart-board blindly (page 127).

c)      …Conventional oncologists routinely administer powerful toxic chemotherapy drugs to cancer patients based on statistical probabilities that these drugs will have a positive effect on shrinking the cancer and moving the patient into a complete, partial or stable disease state. If they are wrong, as often happens, the patient is essentially taking a poison without any beneficial effects. What this means is that when ineffective chemotherapy is given, the patient must endure all of the toxicities without receiving any benefits whatsoever (page 109).

d)      It is important for cancer patients to know that there are no chemotherapy protocols which demonstrates 100% efficacy and therefore, basing drug  selection on clinical studies which show anywhere from 40% to 50%, 60% to 70%, or even 80% response rates is still only, at best, guess work. That turns cancer patients into virtual guinea pigs! (page 108).

a)      …targeted therapies (such as Iressa, Tarceva, Erbitux, Avastin, Nexavar, Sutent, etc) … are they super drugs? Despite all the publicised successes, there is still a dark side to the evolution of these “super drugs”… the truth is that in many cases an increased survival duration of only 3 to 6 month be the actual benefit using them (page 63/64),

c)      The devastating side-effects of multi-drug chemotherapy on the brain, heart, liver, kidneys and nervous system continues to  throw a dark shadow of doubt on quality of life issues for those few patients who survive 5 years of chemotherapy for Stage 4 disease (page 65),

d)      Is it worth the expense and all of the toxic side affects you will experience from reliance on these drugs in order to survive and become only 2 out of 100 patients alive after 5 years? (page 65),

e)      American Cancer Society statistics reveal that the big 4 cancer survival rate in the past 20 years increased by only 2% whereas the survival rate for liver, lung, pancreas and kidney cancers has not improved significantly for the past 4 decades (40years). This is truly a grim reality (page 68),

f)       There has never been a panacea or “magic bullet” yet developed to treat cancer, nor is there any cancer yet that responds 100% to any single drug or group of drugs. The onslaught of “slash and burn” tactics used in the war leave the body’s intrinsic defense mechanisms-immune function, white blood cells, natural killer cells, —all totally depleted (page 68).

Other Notable Main Points Highlighted by the Author

4) How scientific is evidence-based medicine?

b)      Any time a patient is on more than 2 prescription drugs daily, there is NO evidence-based study proving anything (page 47),

c)      Big Pharma rarely runs studies on patients taking more than 2 drugs at a time, and drug interactions for poly-pharmacy are virtually unknown and untested (page 47).

a)      Some important consideration that are never addressed by any conventional oncologists….the patient should know the cancer’s specific nutritional requirements, it’s need for simple sugars, it’s need for an acid environment, it’s need for a low oxygen environment , and the fact that cancer cells are low energy systems (page 40).

b)      …Oncologists and physicians aren’t allowed to talk about supplements or diet as part of cancer treatment (page 21).

6) How dangerous are CAT Scans and PET scans?

a)      … do not allow your doctor to over-test your body with excessive amounts of radiation including excessive CAT scans or PET Scans, which can often make your condition worse by weakening your immune system (page 31),

b)      … a single CAT Scan of the chest may be equivalent to 100 plain chest X-ray films and a PET scan performed with a radio-tagged sugar molecule may deliver 5 times the radiation dosage and exposure of a single CAT Scan(page 100),

c)      The” gold standard” and most invasive testing is that of the PET Scan, which by radiological standards delivers as much radiation to the recipient as the entire combination of a head, chest, abdomen, pelvis and home scan combined (page 34),

d)      The PET scan is based upon the fact that cancer cells, out of necessity rely upon simple sugars for this main source of nutrition. The scan itself uses a radio-tagged sugar molecule to essentially “light up” cancer anywhere in the body, except in the brain tissue which also rely upon sugar as its main source of energy. (page 34),

e)      Incidentally, the PET scan is not definitive by any means. A cancer deposit or metastasis must reach a diameter between 5.0 and 10.0 mm before it can even be detected on a PET scan. Therefore, a sizeable amount of cancer could be present in the body and not be detected at all on PET scanning (page 35).

a)      According to Big Pharma and the cancer industry, death from chemotherapy is acceptable as long as standard chemo protocol has been adhered to (page 91),

b)      Without specific knowledge of the genetic markers for specific tumours to guide them in composing chemo drug protocol, each oncologist is truly” shooting in the dark” (page108),

c)      The conventional oncologist’s main hope is that the chemotherapy will kill the cancer before it kills the patient (page 117).

d)    “It was during my training at UC San Francisco that I discovered how arbitrary the cancer treatment protocols we were learning had already become. Someone would get an idea that we should prescribe a particular drug twice a week for this or that cancer and it should be a standardized dose. Many times there was no scientific evidence behind what they were saying…”

An interesting point to share with you. –  When I (YSK) came across this book, I wanted to buy it from prominent book seller like the Amazon, Barnes & Noble or Borders. None of them carried this book nor is it listed at all. Why?