To our surprise, on 1 March 2012, JA and her daughter showed up at our centre – without any prior appointment. They flew in from Manila, Philippines, to present his wife’s case (let’s call her Jo). I must say this is the first time that we have someone who came personally from the Philippines – generally we helped patients from Philippines via e-mail, which is quite unsatisfactory.

Jo is a 78-year-old lady. Sometime in 2001, she discovered a thumb-sized lump in her right breast. She went to consult a doctor who palpated her breast and said she had a Stage 2 breast cancer. No ultrasound, no mammogram or biopsy was done. Right away the doctor prescribed the following:

In addition to the above oral medications, Jo received Doxorubicin injection once every month for six months from March to September 2011.

Doxorubicin injection was discontinued after September 2011 and Jo continued with her oral medications. She was due to go back to see her doctor in March 2012 for review.

I read about you, the way you treat people with cancer.  My wife is sick. She has stage II breast cancer. She has undergone 6 months of chemo (last session was August 2011) but the mass is still there. And now the doctor said she will have another chemo and that worries me because it seems like she’s going nowhere.  Can you help us? Should I go there and visit you for instructions and pick-up medicines.

Reply:  Thanks for your email. It is hard for me to help people through the email. Cancer is not about just taking herbs or doing chemo. Even your former president died of colon cancer after doing all the chemos. Cancer is about changing of lifestyle, diet, attitude etc. besides taking herbs and avoiding poisonous drugs. If you think I can help your wife, you can come and see me personally in Penang. Bring all the medical reports and scans. I can tell you what to do and you can collect the herbs back for her to try. Regards.

JA came to us with only four pieces of paper – these are supposed to be the medical reports. And the above are all the relevant information I could get – no films, no blood test, no biopsy report, etc. According to JA, after some months on the medication, the doctor said the lump in his wife’s breast was smaller (Note: He did not use ultrasonography to monitor, just palpated the lump with his bare hand, very subjective indeed). The treatment costs about 15,000 pesos per month (USD 375 or RM 1,200). According to JA, his wife’s treatment caused hair loss, altered taste and she became thin.

In making comments on this case, let us be reminded of what Dr. Susan Love said:

The way Jo’s doctor treated her is different from the way doctors treat their patients in Malaysia. Generally patient with a breast lump has to undergo the following:

In this case Jo was only given Doxorubicin as an injection. The rest of the drugs were given in oral form.

1)      Tegafur is a 5-FU prodrug synthesized in 1967. When metabolized, it becomes 5-fluorouracil. According to the FDA, this drug is useless and is toxic. Actually an injection form of 5-FU is more effective. (Note: I wonder why Tegafur is still around in developing countries?)

Jo was also given Taxmoxifen. In addition, to help take care of the side effects of the medication, Jo was asked to take

So the way they treat breast cancer in the Philippines is different from what is normally done in Malaysia, Indonesia or Singapore. The question that bugs me is, Is the treatment effective? By doing what she did, I am not sure what actually is the realistic goal of her treatment – to make the tumour disappear? To cure the cancer?

I suggested that JA and his daughter go home and bring his wife / her mother to see a surgeon. If possible have the lump removed – either by lumpectomy or mastectomy. This is the easiest and surest way to make the tumour disappear. But surgery does not necessarily cure her breast cancer. I have written two articles earlier why it would better for the lump to be removed – peace of mind being the main reason.

After Jo has the lump removed from her breast, she can take our herbs, take care of her diet, exercise and live a stress-free happy life. Pray! She is already 78 years old! She does need to endure the severe side effects of chemotherapy! 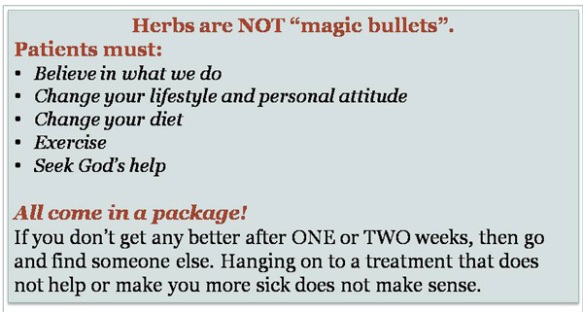 This is JA from Philippines and my wife is your patient. I suggested to her that she remove that cancerous breast.

When she returned to her doctor as scheduled, she mentioned about removing of the infested breast but the doctor is reluctant because he said the cancer may scatter. The doctor gave her a new prescription and she is inclined to follow whatever the doctor wants. The doctor said she will return after 3 months for re-evaluation. Can I give her the herbs as she continues the new prescription? Your suggestion will help me a lot.  Thank you.