If you are a scientist, and if you have done many scientific experiments / research in your life, and if you have a bit of common sense (never mind about having a Ph.D. — these days you can buy one easily), you will know that something is not right with the current medical way of treating cancer using poisonous drugs.

Well, I am not a medical doctor – in a way, that is a blessing because I can critically “see” that something does not add up.  Why? 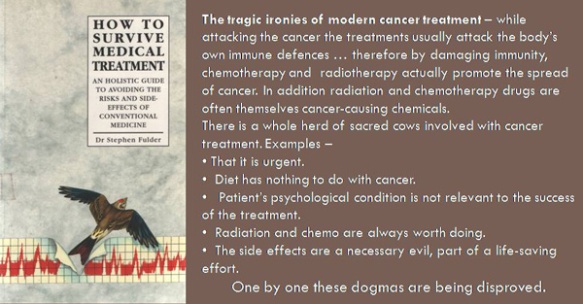 But, let me also say this. You don’t need to be a scientist to “see” what I see and to know what I know.  Hear what a broadway playwright and a movie star has got to say:

In this article, I am not trying to tell you how bad or how good chemo is.  I think you have had enough of that. I am going to bring you yet another different but related message.  I hope you can learn many things from what is written below.

A study was conducted and led by medical researcher, Jane Weeks, who is also a professor of medicine at Harvard Medical School and Professor of Health Policy and Management at Harvard School of Public Health.

What Did They Study?

The Results of the Study

They found that 69 percent of patients with advanced lung cancer and 81 percent of patients with advanced colorectal cancer did not understand that the chemotherapy they were receiving was not at all likely to cure their disease. Their expectations run counter to the fact that although chemotherapy can alleviate pain and extend life in such patients by weeks or months, it is not a cure for these types of advanced cancer except in the rarest of circumstances.

This study was published in the Oct. 25, 2012 issue of the New England Journal of Medicine. The study was funded by grants from the National Cancer Institute and by a grant from the Department of Veterans Affairs

Mass Media Response To The Results Of This Study

Hossein Borghaei, an oncologist at the Fox Chase Cancer Center in Philadelphia said:

Dr. Eduardo Bruera, chair of the Department of Palliative Care and Rehabilitation Medicine at the University of Texas MD Anderson Cancer Center, said:

Dr. Deborah Schrag, a colorectal cancer specialist at Dana-Farber and co-author of the study, said:

Oncologists said it was crucial to find where and why the misunderstanding takes root so that doctors can be sure their patients are making informed decisions.

Sandra Swan an oncologist at the Washington Hospital Center said:

How should doctors have this difficult conversation with patients?

Smith told CBS This Morning that doctors should operate on an “ask, tell, ask” basis when patients are faced with a life-threatening illness. That means doctors should ask patients up front how many details they want to know about their illness. Then, they should tell patients in understandable terms their prognosis, such as by saying “based on people like you, you may have weeks or months.”

While some patients may have positive attitudes and think they’ll still beat the disease, Smith says he’ll tell patients that doctors won’t stand in the way of miracles, “but we can hope for the best but still need to plan for the worst.”

The study raises concerns about unnecessary but costly medical treatments for dying patients.  Smith said having the difficult conversation with a patient about their end-of-life care may lower these costs because many patients may want to be comfortable at home, and not in a hospital. This really isn’t about saving money, so much as honoring people’s choices.”

Truth Is a Bitter Pill – Hard For You to Accept Reality

The war on cancer

For the past 16 years, we at CA Care have been spreading the above message. Now, I am glad to say that cancer experts in the US are saying the same thing. I don’t think I have to add any more messages!  But let me just share with you our frustrations over these years.

Here is another example. A breast cancer lady underwent chemotherapy, radiotherapy and took Tamoxifen for five years.  Then cancer spread to her bones. She asked the doctor why she was not cured. The answer was:  It is your fate.  But the recurrence has nothing to do with what you eat. It is just your fate. Believe that? Where is the so-called science in cancer treatment? https://cancercaremalaysia.com/2012/05/12/breast-cancer-when-a-so-called-cure-was-not-a-cure/

Let me end with these quotations: