KF (S-364) is a 40-year old Indonesian lady. In 2011, she had coughs for more than a year. There was no blood in her phlegm. She took cough syrup but was not effective. In January 2013, she became breathless and found it difficult to climb the stairs. Her problem became more serious and she went to a private hospital in Tangerang. There was fluid in her lungs. Pleural tapping was performed once. But this procedure did not help her much. She was still breathless. Another tapping was done but there was no fluid.

A CT scan was performed and the doctor said there was a tumour. She was referred to a lung surgeon who told her that surgery was not indicated because her lungs could be filled with fluid and there was “not enough preparation” for him to proceed with the surgery.

Not satisfied, KF went to another lung specialist in a Jakarta hospital. Another CT scan was done, specimens were collected, etc., but the specialist could not determine the cause of her problem. The lung specialist suggested that KF’s problem could be due to “jamur” or parasites! KF was prescribed antibiotics. KF was also asked to do a biopsy, which she declined.

KF came to a private hospital in Penang in April 2013. She consulted a lung specialist. A CT done on 5 April 2013 showed: 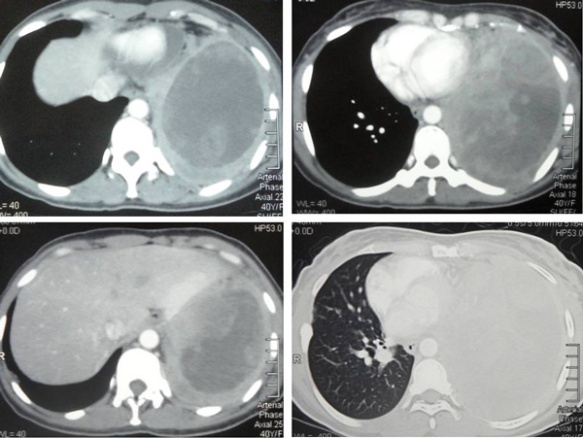 Immunohistology report of 20 April 2013 indicated the cells are positive for CK7 only and negative for CK20 and TTF-1.

The lung specialist referred her to a surgeon who told her surgery was not indicated for her case. KF was then referred to an oncologist. KF was prescribed 5 type of medication and one of which was Iressa. KF was asked to go home and try the Iressa and see what happen. If Iressa was not effective, KF would have to undergo chemotherapy.

A week in the private hospital cost RM 21,000. In addition she paid RM 7,000 for the medication inclusive of a month’s supply of Iressa.

KF was told Iressa would cause side effects. And she was not willing to take it. Someone living in the same apartment as she, told her about CA Care. She came to seek our help on 25 April 2013. She presented with the following:

What had gone wrong?

According to Kakiuchi et all, Gefitinib (Iressa), has shown potent anti-tumor effects and improved symptoms and quality-of-life of a subset of patients with advanced non-small cell lung cancer (NSCLC). However, a large portion of the patients showed no effect to this agent.  http://www.ncbi.nlm.nih.gov/pubmed/15496427

Lung adenocarcinomas with mutated epidermal growth factor receptor have significant responses to tyrosine kinase inhibitors, although for unselected patients it does not appear to have a survival benefit. Both EGFR mutation and gene amplification status may be important in determining which tumors will respond to tyrosine kinase inhibitors. http://www.jthoracdis.com/article/view/87/152

Predicting Sensitivity to Iressa and Tarceva

However, about 10% of Western patients treated with either of these drugs had dramatic and sometimes long-lasting responses. Investigators at the Dana Farber Cancer Institute, Massachusetts General Hospital in  Boston, and also at Memorial Sloan Kettering Cancer Center in NYC published results showing that most of these “dramatic responders” had recurring mutations in the tyrosine kinase (TK) domain of the EGFR gene.

In the NSCLC patients who have mutations in the TK domain of the EGFR. This makes the cancer cell exquisitely sensitive to dying when the switch is turned off by a drug like Iressa or Tarceva, and explains why some patients can do so well on these drugs. Although there can be mutations anywhere in the TK domain, only some of them confer sensitivity to the TKIs.

A point mutation in exon 20 resulting seems to allow the EGFR TK to work much better than normal. Mutations in exon 20 have also been associated with resistance.

Mutations can be detected using sequencing to identify every mutation in the tyrosine kinase domain, whether predictive of responsiveness to TKIs or not. Another method is something called allele-specific polymerase chain reaction (PCR) which can then be detected by a machine. This method only detects 28 of the most common EGFR mutations, but generally requires smaller amounts of tissue than sequencing and has a slightly faster turnaround time. There is also evidence that this method may be more sensitive than direct sequencing.