Ros (S-321) is 6-years old. For about a year, when she was 5 years old, she had been vomiting and having headaches. In December 2012, her parent brought her to the hospital where a CT scan was performed. The doctor in Aceh, Indonesia said there was a tumour in her brain. It was not operable. Ros was asked to go to Jakarta for further treatment.

Her parent decided to bring her to Kuala Lumpur instead.  MRI performed on 14 December 2012 indicated a well-defined mass measuring 3.2 x 3.5 x 2.9 cm, compressing onto the adjacent 4th ventricle. The lateral and 3rd ventricles were dilated. This was diagnosed as pontine tumour. 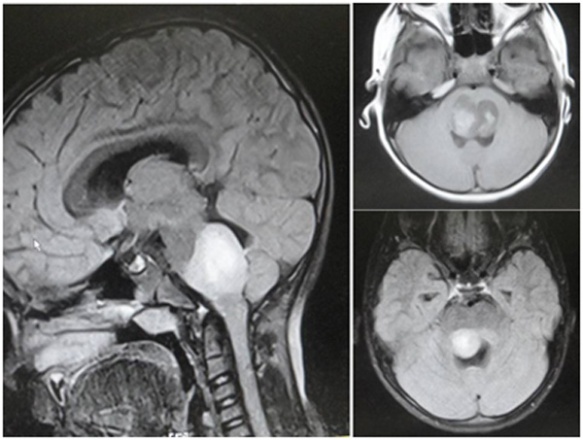 The doctor said the tumour was not operable and there was also no medication for her. Back in Aceh, Ros’s parent started her  on herbs like Soursop leave tea, Sarang Semut, etc.

On 20 January 2013, her father came to Penang to seek our help. Surprisingly, Ros did not have much symptoms. She would only suffer headaches if she had fevers. She had squint or cock eyes, otherwise she was alright.

Ros was prescribed Capsule A, Brain Tea 1 and 2 plus C-tea and Brain Leaf. Due to her age, she was asked to take only at half dosage. We warned her father that the herbs are bitter and his daughter might have difficulty taking them. His reaction was, We will try.

Our Herbs Helped Her

To our surprise Ros’s auntie came back to see us on 22 February 2013 – a month after taking the herbs. Ros did not have difficulty drinking the bitter and awful tasting herbal teas! And she had improved. There were no more fevers. Her eye movements had improved. There no more headaches or vomiting. Indeed the herbs had helped Ros tremendously.

There was one problem though! The family wanted Ros to bring fried bananas to school. Our answer was, Absolutely no! No fried stuff.  Since taking our herbs, Ros seemed to have frequent urination at night. Sometimes she even urinated in bed without knowing. Since Ros did not come to see us, there was nothing we could do to assess her bladder energy using the AcuGraph. We suggested that we would let the problem take care of itself.

Two months later, i.e. 26 April 2013 (and Ros was already 3 months on our herbs), Ros’s father came to see us again. He was happy and said that Ros had improved tremendously. Her eyes seemed to be normal now. If she reads too much then her eyes become juling (cockeye or squint). Otherwise she is okay. Since taking the herbs Ros did not have any more headaches. She did not vomit either.

The family had solved the problem of her night urination! If Ros were to take the herbal teas way pass 6 p.m. she would urinate frequently at night. If she was to take all teas before 6 p.m. there would be no urination problem!

Current Medical Knowledge About Pontine Cancer and Its Treatment

The brain stem consists of the midbrain, pons and medulla as shown in the diagram below.

What is the cause of this cancer?

Currently there is no answer!

Each child may experience symptoms differently.

Pontine tumors affect the cranial nerves, causing symptoms related to the nerves that supply the muscles of the eye and face, and muscles involved in swallowing. This may give rise to symptoms such as:

The tumor also affects the “long tracks” of the brain, with resultant

Tumors may also block the flow of cerebrospinal fluid in the brain, causing increased pressure with headaches and vomiting resulting in:

Symptoms usually worsen rapidly because the tumor is rapidly growing.

According to from the Dana-Faber Cancer Institute, Boston, USA,  website many specialized brain tumor treatment centers have now specialists who deliver complementary or alternative medicines. These treatments, which may help control pain and side effects of therapy include the following.

The above information is obtained from the following websites: