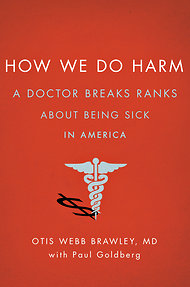 Shortly after he turned 70, Mr. Ralph De Angelo, a retired department–store manager in the heart of black America, saw a newspaper advertisement that claimed that prostate cancer screening saves lives. The advertisement also mentioned that 95% of men diagnosed with localized disease are cured. (So, was Dr Albert Lim, Malaysia’s leading oncologist who died of prostate cancer on March 8 2013, in the unfortunate 5 % ?)

The following is the tragic story of Mr. De Angelo after his prostate screening and how unnecessary harm can be done to those who go for screening of the prostate, breast, etc. This is a classic example of collateral damage (due to overtreatment) described in the book “HOW WE DO HARM” by Dr Otis Webb Brawley, MD a medical oncologist and Executive Vice President of the American Cancer Society.

In 2005, Mr. De Angelo, after his prostate screening, was diagnosed with prostate cancer, with a PSA reading of 4.3 ng/ml (just 0.3 above is considered normal). He was urged to have a biopsy. Two of the 12 biopsies showed cancer. The Gleason score was 3 plus 3 which is associated with the most commonly diagnosed and most commonly treated form of prostate cancer. There is no way to know whether a patient with this diagnosis will develop metastatic disease or live a normal life unaffected by the disease.

With this uncertainty, Mr. De Angelo was persuaded by his urologist to perform a radical robotic prostatectomy which he (the urologist) thought was the gold standard of care. After the operation, he was told he had a small tumour 5mm by 5mm x 6mm in a moderate size (50cc) prostate. The tumour was all in the right side of the prostate. This means that the tumor didn’t appear highly aggressive under the microscope. Good news? Unfortunately, Ralph realized that he was then incontinent. Three months later, the incontinence was still there and he had to wear pampers continuously. Besides incontinence, Ralph was also impotent and given Viagra.

With a lingering 0.95 ng/ml (even though his prostate has been removed), a radiation oncologist suggested “salvage radiation therapy” to the pelvis. Four weeks into the radiation, Ralph saw blood in his stool. This was due to radiation proctitis, i.e. radiation damage to the rectum. He continued having incontinence, but also developed a burning sensation upon urination. Later, Mr. De Angelo stopped his radiation with one more week to go. For the rectal proctitis, he went to a gastroenterologist, who prescribed steroids in rectal foam that he had to put up his rectum four times a day.

About three weeks after stopping the radiation, Mr. De Angelo realised that whenever he passed gas, some of it came out of his urethra. He also sensed liquid from his rectum soiling his diapers. He was confirmed having a rectal fistula into the bladder…there was a hole between Ralph’s rectum and his bladder. After several urinary infections and when the fistula didn’t seem to be healing, he had to see a GI surgeon. He performed a colostomy to keep stool off the inflamed rectum and the hole into the bladder. The next step was an ureterostomy, a surgery that will bring urine to abdominal wall and collect it in a bag, just like his bowel movements.

In Dec 2009, Mr. De Angelo’s daughter called Dr Brawley to inform that her father had “urinary tract infection” which later progressed to sepsis, a widespread bacterial infection in the blood. On the fifth day of hospitalisation, Ralph passed away (only 4 years from diagnosis). Interestingly…”the death certificate reads that death was caused by a urinary tract infection. It doesn’t mention that the urinary tract infection was due to his prostate-cancer treatment and a radiation-induced fistula….Mr. De Angelo’s death will not be considered a death due to prostate cancer, even though his death was caused by the cure. (We just wonder how the hospital in KL recorded the cause of Dr Albert Lim’s death).

In conclusion, Dr Brawley strongly believed that… “the majority of these men, who are treated with radiation or hormones or both, got no benefit from treatment. They get only the side effects including those that Mr. De Angelo had: proctitis i.e. inflammation and bleeding from the rectum, cystitis, burning sensation on urination and a feeling of urgency, a rectal fistula in which bowels and bladder are connected. The side effects of hormones can be diabetes, cardiac diseases, osteoporosis, and muscle loss.

In the case of Mr. Ralph De Angelo, both the surgeon and the radiation oncologist got paid handsomely. They both likely thought they were doing the right thing. However, Ralph got the side effects, and his quality of life was destroyed (too much collateral damage?).

One parting remark by Dr Otis Webb Brawley which is very relevant to this article:

“Prostate-cancer screening and aggressive treatment may save lives, but it definitely sells adult diapers “

Dr Albert Lim, Malaysia’s leading oncologist, died on March 8 2013 from prostate cancer, in less than a year after diagnosis. At the time of his death, he had metastasis to the bones and liver (some said his lungs were affected as well). We just wonder whether he died because of the cancer or because of the scientifically tested and evidenced-based cancer treatment.

2)   A WORLD WITHOUT CANCER by Dr Margaret Cuomo, MD…In Chapter 3, “The Promise and Limits of Cancer Screening” Dr Cuomo quoted:-

3)   MORE HARM THAN GOOD by Dr Alan Zelicoff, MD, a physician and physicist. Notes on Prostate Cancer screening/treatment can be found in:

“…studies to-date involving over 55,000 men with prostate cancer does not validate the hypothesis that early aggressive treatment will save lives.  This is very puzzling, no doubt.  How is it possible that this treatment has not led to better outcomes?”  ISBN NO: 978-0814-400272

4)    OVER-DIAGNOSED: MAKING PEOPLE SICK IN THE PURSUIT OF HEALTH by Dr H. Gilbert Welch, MD. (Chapter 4 is entitled “We look harder for Prostate Cancer – read how screening made it clear that over-diagnosis exists in cancer. According to Dr Welch, “the decision to use a PSA cutoff of greater than 4 as the threshold for biopsy was purely arbitrary” (Page 50) ISBN NO: 978-0-8070-2199-6

5)    SHOULD I BE TESTED FOR CANCER by Dr H Gilbert Welch, MD. (This is Dr Welch’s earlier book – learn what total body scans, mammograms, PSA checks, and other common tests can and can’t do and discover why screening can do more harm than good). ISBN No. 978-0520248-366

6)   WHAT YOUR DOCTOR MAY NOT TELL YOU ABOUT PROSTATE CANCER by Dr Glenn J. Babley, MD, Professor of Medicine, Harvard Medical School. (According to Dr Babley, “PSA testing in its present form has not yet been shown to save lives, and its use definitely leads to more procedures and tests, many of which carry risks and side effects…most men die with prostate cancer, rather than from prostate cancer). (page 25) ISBN NO: 978-446690-805

7)    THE DEFINITE GUIDE TO PROSTATE CANCER by Dr Aaron E. Katz, MD, Professor of Clinical Urology at Columbia University College of Physicians and Surgeons. (Dr Katz also believes that screening…may cause more harm than good because they can lead to aggressive treatment of disease that might not otherwise cause any harm.  Allopathic treatment applied to cure early-stage disease may cause side effects that are worse than the disease itself (page 59). Not all prostate cancers that are diagnosed require medical treatment. (page 62) ISBN NO: 978-1-60961-310-5

9)   EARLY DIAGNOSIS AND TREATMENT OF CANCER – PROSTATE edited by Li-Ming Su….Read about Overdiagnosis and Insignificant Cancer:-

10)        DR PETER SCARDINO’S PROSTATE BOOK by Dr Peter Scardino, Chairman of the Department of Surgery at the Memorial Sloan-Kettering Cancer Center. (In Chapter 13, Watchful Waiting, Dr Scardino commented that “…many prostate cancers are so slow-growing, they are unlikely to cause symptoms during the remainder of a man’s natural life…also, all the treatment we currently have for this disease carry a risk of troublesome side effects, so you do not want to have treatment unless you absolutely want it.” (page 251) ISBN No. 978-1583333-938