This is an e-mail we received from the brother of a 58-year-old breast cancer patient.

My sister has been diagnosed with breast cancer. The lump on her right breast had been removed on 23 March 2016. Upon strong recommendation by the doctors, first cycle chemotherapy (FEC regimen) was done on 24 April 2016 but due to chemo extravasation, she is now having a deep and large wound with pus on her left arm and needs daily dressing at the hospital, although it is recovering but the rate is slow.

Due to the harsh chemo side effects, we do not want to proceed further with the chemo anymore and decided to consume your herbs. She might not be able to go to Penang for the time being because of the need to do daily dressing for her wound, I am able to see you in Penang if necessary.

The patient’s brother came to seek our help. His sister was supposed to undergo 6 cycles of chemotherapy. But this has to stop because after the first shot of chemo, the injection site in her left forearm developed blisters which later progressed to deep wound (picture) below. It has been more than 2 months and the recovery of her wound has been very slow. Fortunately, the patient did not suffer any pain from the wound.

It is sad that such a thing ever happened. And I was curious why it could happen! I spent one Sunday afternoon surfing the internet for more information. Problem like this is known medically as EXTRAVASATION.

In my book, Cancer War, I had a picture as below but I would never imagine it could be that bad as the picture above. 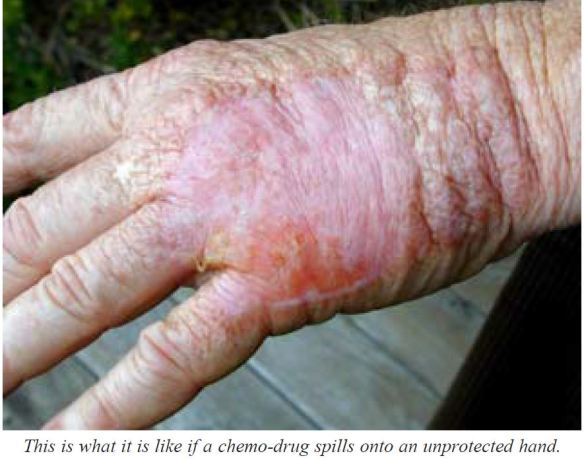 Let us do some serious thinking!

Information from the Internet

Cytotoxic agents have the potential of causing destruction of healthy cells. Due to the relatively low number of cancer treatment centres, it is often not possible for a patient to take the complete course at the centre itself because of financial constraints and long distances from their home towns or villages. After the initial one or two courses, many patients find it convenient to take the remaining treatment at their nearest health institution. However, physicians in such nonspecialized centres may not be aware of the local side effects of the drug. Very often, even in oncology hospitals, the work of infusion of cytotoxic drugs is left to a junior house surgeon or an intern, whose inexperience in venupuncture and ignorance of precautions for infusing a cytotoxic drug can lead to extravasation of the drug.

Extravasation of the drug can produce extensive necrosis of the skin and subcutaneous tissue. This not only adds to the misery of the already seriously ill patient, but can also cause serious functional loss, as most often, the forearm and hand veins are used for infusion.

This study was done in the Department of Plastic Surgery of a Medical College in the period from January 2002 to December 2006. There were twelve patients. All the patients were from rural areas and belonged to lower socioeconomic strata. None of the patients was educated beyond middle school.

Extravasation of cytotoxic drugs leads to symptoms which are self-explanatory for this catastrophe. The majority of the patients will complain of excruciating pain and itching in the infusion site. Within a few hours, the extravasation area will show erythema, edema, and induration. Within a few days, these signs and symptoms will increase and the skin will show discoloration and desquamation of the epidermis or blister formation will follow. If a large dose of a cytotoxic drug is extravasated or no intervention is taken at this step, the area will show ischemic changes and ulcer formation will be inevitable.

It is well said, “Prevention is better than cure” and this holds true for extravasation injuries also. Once there is an extravasational injury to the tissue, morbidity is inevitable. Extravasations of cytotoxic drugs further increase the suffering of cancer patients. This catastrophe can only be avoided by vigilance.

Use of chemotherapeutic drugs is commonly associated with substantial complications. These drugs are infused in veins of dorsum of hand or antecubital fossa.Subcutaneous extravasation is a known complication of intra-venous administration of chemotherapy agents. There are limited cancer centers throughout the globe with properly trained medical professionals. Due to lack of specialized centers and experienced medical professionals, chemotherapy infusions can lead to higher incidence of extravasation injuries. The overall incidence of extravasation injuries varies from 0.1-7%.  It is characterized by drug escaping out of the vessels in subcutaneous tissue plane due to repeated venous punctures and its cytotoxic effect of the chemotherapy drug. The infusion area over dorsum of hand is having minimal subcutaneous fat tissue and so it is more prone for severe damage by extravasation injuries; this injury can damage underlying tendon, joint, and neurovascular structures.The extravasation injuries are difficult to treat due to lower immune status of the patient and complexity of the wound with exposed bone or tendons.