In the early morning of 4 February 2020, I received an email from YK.

I am YK. Kenny recommended me to see you for treatment of my husband’s cancer.  My husband, EK, is quite weak but he is so adamant to travel to Penang to see you personally and seek your treatment. We will be driving from KL early morning and are expected to reach your clinic before noon. We would appreciate if you could kindly accommodate our request at this very last minute.

EK, 60 years old, was wheeled into our centre. This is what his wife told us:

Chris: How much have you spent for all these treatments,?

I am sorry for writing this email but for the sake of my own knowledge in trying to help others, I hope you don’t mind me asking. Kenny just came to the centre this morning. He told me your husband passed away just a day or two after coming to see me. Is that correct news? Besides that he also took some products and was on Gerson Therapy? If you find it difficult to respond, it is ok … I understand. Chris

Thank you for your email. In fact, I wanted to email to inform that my husband passed away on 11 Feb 2020, while we visited you on 3 Feb 2020. In fact, my husband was very positive after our trip to Penang and he did try to follow the prescription for one and half day and a lot of dark slimy charge from his stoma.

Unfortunately, he can’t continue because of his low sodium level whereby he can’t eat at all, just drink some soup and protein / milo drink since 2-3 before CNY. In fact, he told me that he will try again in 1 to 2 weeks time after he resolved his sodium problem.

When we visited you at your centre, he was already very ill but it was his wish to see you then. We are very glad that you were willing to see us at a very last minute request. We really appreciate your kindness. Thank you once again. Regards. YK.

After surgery, EK did everything that his doctor wanted him to do. He took Xeloda. Barely four months later, the cancer recurred. Why? Is it not obvious that  the scientifically proven Xeloda was not effective?

Let me ponder what Einstein said:

My response to Einstein: Yes sir, I would give up Xeloda and find another bullet. That is the only sane thing to do, right?

More … and more questions: What if after the surgery, EK were to do nothing? No Xeloda, no Xelox chemo and no radiation! Many of you must be thinking I am mad to have the gut to pose such a “silly” question.

You may say, If EK did not do chemo, he would die (immediately???) or The cancer would spread all over the body.

Hang on, please read this:.

Dr. Richard Smith is the editor of the prestigious British Medical Journal. Why is he so upset? Does he know “something” that you and me do not know?

In May 1996, that is almost 24 years ago, the daughter of Tony, a 67-year-old man from Penang, came to my house asking for help. Her father was diagnosed with colon cancer which had spread to his liver. After surgery, his honest doctor concluded that chemotherapy or radiotherapy would be of limited benefit. The doctor told Tony’s daughter, Bring your father home, organize a party for him and then tell him he has cancer! Let him live happily and count his days.

Luckily, at that time there was no Xeloda or Xelox yet! If there was a Xeloda, would Tony’s doctor prescribed that to him? What do you think would happen after that?

Tony’s doctor was left in a limbo. His advice was to do nothing. I believe he had a pure conscience and was just being blatantly honest. (See, I am not “mad” after all to suggest that at times you don’t need chemo!).

Take a look at the pictures below. Tony had difficulty moving around. Even eating by himself was difficult. He had to be fed. That was before he was started on our herbal therapy. 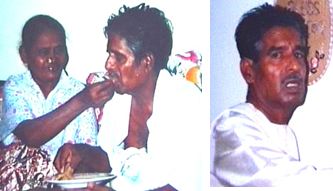 I prescribed herbs for Tony. I must admit at that time,(again a reminder, 24 years ago), I was very much a green horn. I have not seen many cancer patients yet. After all we had just started CA Care in mid-1995.

Having seen the doctor’s medical report and comment, I was not hopeful at all that I could help Tony in any way. But what choice have we got at that time? But look at the photographs below. Tony bounced back to life. He was able to ride his motorbike and travel to visit friends in distant town.

Tony was one of my few pioneer patients. It was from patient like him that I started to learn more and more about how to heal cancer.

Twenty-four years ago, that young man’s hair (left) has not turned gray yet!

From being weak and half-dead Tony gained weight and regained his health within months. Look how happy he was.

Fast forward to 2020. We are often told that oncology has progress tremendously. With more and more state-of-the art (but expensive) drugs cancer patients would be better off today than 20 years ago. Really?

Below is the photo of EK taken on 3 February 2020 – two years after being diagnosed with colon cancer and after being subjected to all gold standard methods of treatment. I am not sure how he looked like before his scientific treatment. But I guess he would look like a normal person, unlike the one we see on a wheel chair in this picture below. Is  that progress or regress? And that is after spending RM400,000.

If you have a choice in the way you die, which do you prefer? Dying smiling or dying with sufferings like this?

Let me end by asking you to reflect seriously what Dr. Azra Raza wrote below: