James (not real name) is a 58-year-old Indonesian. His problem started in early 2016 when he lost his appetite, felt fatigue and lost weight. Blood test showed his PSA was more than 500 and his alkaline phosphatase was 200 plus.

James went to Singapore to consult an urologist at a private hospital. A bone scan showed his prostate cancer had spread to his bones.

James was given Lucrin injection (three months once) and an oral drug, Casodex.

Three months later, the doctor increased the Casodex dosage because his PSA was rising.

With the treatment, James PSA dropped to 0.03, his alkaline phosphatase was at 270 (table below).

Table 1: The fall and rise of PSA after hormonal treatment

Disappointed with the results, James consulted another doctor in The Singapore General Hospital. A PET scan results showed evidence that the cancer had spread to his bones.

James continued to receive his Lucrin injection but Casodex was discontinued. He was asked to take a new oral drug Enzalutamide (or Xtandi). This cost SGD 5,600 per month.

James was also told that if the above treatment is not effective, then there is no other option but to go for chemotherapy.

James found us in the internet and decided to seek our help. During his first visit we prescribed herbs for his problems.

Three months later, September 2017, James came back to see us again. James told us that after seeing us, he went back to his doctor in Singapore and was started on the new oral drug Xtandi. He took 4 tablets of Xtandi per day for the three months while at the same time half-heartedly following our therapy.

When James showed me the two blood test results done in Singapore, my immediate remark was, Good – what else do you expect? Cannot ask for more! His PSA in June was 89.4 and with Xtandi and herbs the PSA dropped to 19.8. Great result! But hang on, James had not finished his explanation yet. Actually I am being fooled by these numbers.

James said, he monitored this PSA level often (Table 3). And if you study the numbers below properly you will note that James is heading for another disaster. That SGD 5,600/month drug and our herbs did not work!

Besides the PSA what could be another possible problem is James’ liver function is deteriorating as shown by the increase in AST and GGT. James has to watch out  for this too.

Some notes from the internet

Xtandi is a drug used to treat hormone-resistant prostate cancer that has metastasized, or spread to other areas of the body. Xtandi costs $7,450 per month. The average treatment course is eight months, so the cost of Xtandi is usually about $60,000 for a full course of treatment.

The drug costs much more in America than it does elsewhere, with a U.S. list price of about $129,000 per treatment course, compared with $39,000 in Sweden and in Astellas’ native Japan.

In Singapore, James paid SGD 5,600 for a month supply.

Xtandi is an oral medication that inhibits the androgen receptor, which drives prostate cancer progression.

In a phase III clinical study of patients previously treated with chemotherapy, Xtandi reduced the risk of death by 37 percent and increased median survival by 4.8 months, compared to instances where subjects took a placebo.

In a separate phase III clinical study of patients not previously treated with chemotherapy, Xtandi reduced the risk of death by 23 percent and increased median survival by 4 months.

In the case of James he is still fine and he is not dying yet. HIs main concern is his PSA is rising in spite of all the drugs taken.

From our conversation with James and his wife, it appeared that we are wasting our time. I told James and his wife our herbs are not magic bullets and I do not expect his PSA will drop like when he was medical drugs. Healing needs full commitment. James did not show that he has that commitment. He did not take care of his diet. Once a while he ate things that he is not supposed to eat. Did he really take his herbs properly? I am not sure either and I did not ask him about this.

In fact I told James and his wife. If I was told earlier that he wanted to take Xtandi, I would not have prescribed him the herbs. It would be better that he takes the Xtandi first and see what happened. If and  when the doctor’s drugs cannot work anymore then he can come and see us for help.

Although James said he benefited from taking our herbs, I am not sure if this is true or not.

Listen to our conversation that morning.

BY DOCUMENTING THESE STORIES IT IS OUR HOPE THAT YOU OR YOUR LOVED ONES CAN LEARN SOMETHING MORE THAN JUST “GOING TO THE DOCTOR OR HEALER” TO SEEK TREATMENT.

FYC opted for the latter. He was given Zoladex injection at 3 monthly interval. In addition took oral Casodex.  His PSA dropped to below zero. All was well. However, 2 years later, his PSA started to increase again.

FYC underwent 6 cycles of chemotherapy using Taxotere. He did not suffer any side effects. A bone scan in February 2014, showed bony metastasis. The cancer had spread to his 2nd rib, thoracic and lumbar vertebrae, sacrum, right sacroiliac joint, both ischii and lesser trochanter.

FYC received 10 sessions of radiotherapy. His backaches were resolved after the treatment. FYC was alright for about 8 months.

FYC had no other option and came to see our help.

Tom proceeded to have an open radical prostatectomy with bilateral pelvic nodes dissection on 25 January 2008. Histology unfortunately confirmed extensive cancer and there were a couple of positive nodes bilaterally. The margin was positive.

At this point, Tom was started on Casodex. Test showed that Tom was predisposed to osteoporosis. So the doctor started him on Fosamax. Tom was on Casodex for about 4 years. Then his PSA started to increase to 14 plus.  The urologist advised  orchidectomy (removal of the testes).

His PSA did not decrease at all even after the surgery. Instead, it went up to 22 then 35. A CT scan in July 2014 indicated sclerosis of the T6, T 10, L4, L5, sacrum and coccyx. Compression of L3 vertebral body was noted. There were multiple nodules in both lungs, indicating metastases.

Tom  consulted a few oncologists and decided to go for chemotherapy. Tom completed 6 cycles of chemo with Taxotere (docetaxel) in December 2014. His PSA then was 15. While on chemotherapy, TH suffered the side effects such as: total loss of hair, loss of appetite, lack of strength, etc.

Since he had pain in his lower back bone, 10 sessions of radiation were given to him in February 2015. His PSA shot up to 264 in February 2015 while he was undergoing radiotherapy. A month later, March 2015, his PSA increased to 531.

The oncologist suggested that Tom  go for another round of chemo either with Jevtana or oral drug  Zytiga (abiraterone acetate). Zytiga cost RM 12,000 per month.

Tom did not think that he was fit enough to take another hit from chemo drug.

His overall health condition and energy level had deteriorated rapidly since January 2015. He lost 6 kg in one month. He has no appetite, he has numbness in his feet, weakness in his legs, wet cough that seems to worsen over the week, and he constantly has hyponatremia (low sodium in blood).

Tom’s daughter wrote: We also learned that he has drug-induced diabetes after chemo. We hope that our father will receive an effective alternative treatment from you after reading the information from your website.

His PSA reading from July 2014 to March 2015 showed a rather drastic increase.

Tom, his wife and daughter came to seek our help.

Chris:  Did you ask if all the treatments they gave you were going to cure you?

They answered: No, the doctor said no guarantee!

C: Who ask you to come and see us?

Tom: My doctor. I went to his clinic and he told me right away that I should seek your help.

C: Is he a medical doctor?

I wonder if Einstein was joking when he said:

What You Need to Know About Carbazitaxel (Jevtana)

This is the first time, we have heard of Jevtana, cute name indeed.  This chemo-drug was approved by the US FDA for the treatment of hormone-refractory prostate cancer on 17 June 2010 … thus making it a rather new drug. But click on this link to know what you are up against. http://www.jevtana.com/advanced-prostate-cancer/default.aspx

JEVTANA may fight tumors that have become resistant to docetaxel, so it may help you even if docetaxel is no longer working.

Common side effects of JEVTANA include:

Read carefully and prayerfully. Decide for yourself what is good for you. Your life is in your hands.

To know more about healing of prostate cancer, read this book. 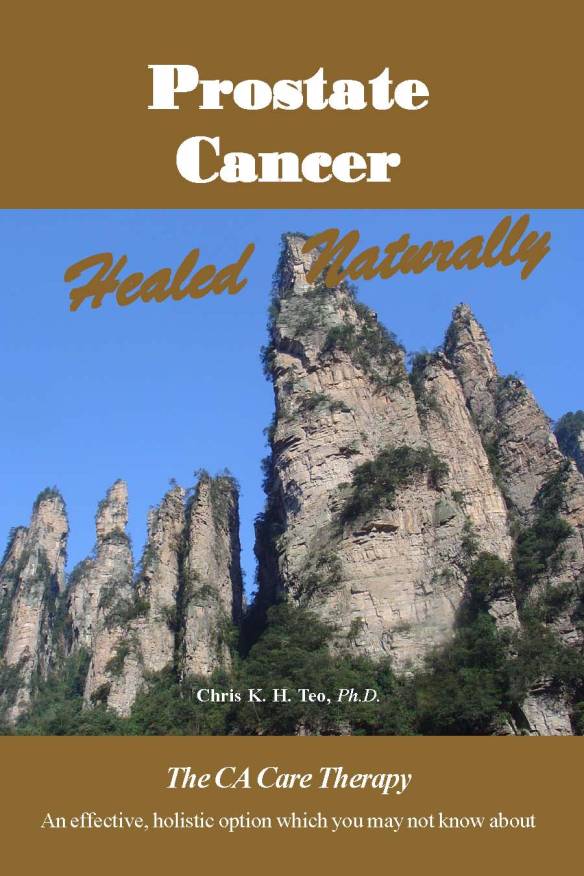