LP (H588) is a 34-year-old mother of two. During her second pregnancy (sometime in July 2009), she felt a lump in her left breast. She ignored it. She gave birth on 5 September 2009. She breast-fed her baby for a month. Her left breast produced little milk. The doctor thought it was due to infection and prescribed her antibiotics. The lump became more prominent. Her gynaecologist suggested removal of the lump.

LP was referred to a breast surgeon. A excision biopsy was performed on 26 October 2009. The specimen revealed features of an invasive ductal carcinoma. Lymphatic invasion was noted. The tumour was less than 1 mm from the surgical margins.  The tumour was negative for oestrogen and progesterone receptors but strongly positive for C-erb-2. DNA Probe Kit detection confirmed HER-2/neu gene amplification. The surgery cost RM 6,000.

In view of the above, a mastectomy was recommended but LP refused. She, however, agreed to a second surgical intervention to remove more margin and the lymph nodes.  A report on 12 November 2009 indicated that all the margins were free of cancer. All the left 26 axillary lymph nodes were free of metastasis. At the same time, her right hookwired breast lump specimen showed lactating adenoma. A chemo-port was installed on the right side above the breast.  The entire surgical procedure cost RM 20,000.

LP subsequently underwent chemotherapy. The first three cycles was with FEC (5-FU, epirubicin and cyclophosphamide).  This three-cycle treatment cost RM 12,000. The fourth, fifth and sixth cycles consisted of Taxol plus Herceptin. The total cost of these three cycles was RM 46,000. The last chemo-treatment was in May 2010.

From June 2010 to August 2010, LP received thirty sessions of radiotherapy. She was “well” after that.

Unfortunately, a whole body PET-CT scan done on 29 December 2010, showed a solitary liver metastasis. The lesion was 3.4 x 3.0 x 3.0 cm in size.  There were also multiple non-specific uptake of FDG in the vertebrae but no bone destruction was seen in the CT.

LP was asked to undergo surgery for her liver metastasis. She declined. Desperate, LP took Tian Xian Liquid for a month. The she and her husband went to Cambodia to undergo a treatment using Marijuana oil (MO). She stayed in Cambodia for two months.

An ultrasound on 11 March 2011 however showed that the right lobe liver lesion increased in size from 3 cm a few months ago to 7 cm.  In addition, the radiologist report indicated: “there is suggestion of a small lesion adjacent to this measuring 9 mm and ? another lesion in the left lobe measuring 8.5 mm.” Impression: liver metastasis increasing in size and number.

An ultrasound done on 15 April 2011 showed multiple liver metastases with progression of disease. The radiologist report said: “The previously seen metastatic lesion in the right lobe was significantly larger measuring 12.3 x 7.5 cm occupying almost half of the right lobe. In the left lobe there are at least 4 – 5 lesions, the largest measuring approximately 1 cm.” 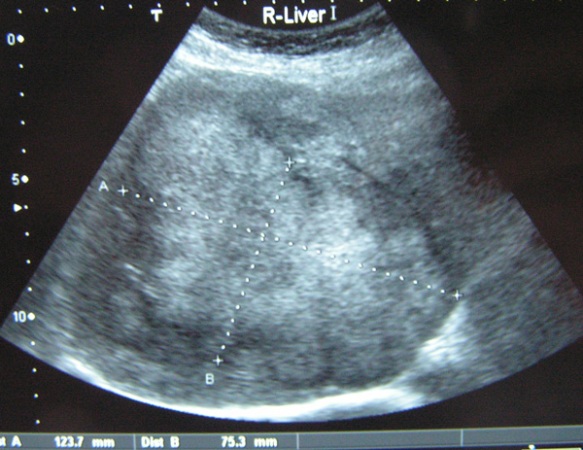 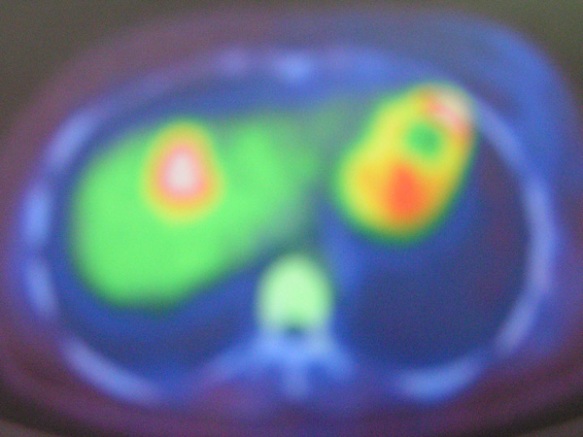 LP again took Tian Xian Liquid – this time it was the Super variety with triple dosage costing about RM 12,000 per month. Not satisfied, LP and her husband came to seek our help on 21 April 2011.

After hearing her story, we proceed to read her meridians using the AcuGraph 4. We then prescribed LP Capsule A and B, Liver 1 and Liver 2 teas, Breast M and LL-teas. Due to her low Spleen meridian energy we also asked LP to take A-Sp-7 herbs.

LP came back to see us again on 23 May 2011, i.e. after a month.  According to LP, she did not feel any change in herself after taking the herbs. Below is a comparison of her AcuGraph readings (Figure 2 and 3).

This is indeed a sad and tragic case.  Before we ask some hard, searching questions, let’s listen to the conversation we had on 21 April 2011.

Like most patients, LP and her husband totally believed in medical science. Doctors are the “experts” and what they advised, LP and her husband followed without a slightest sense of doubt. After the surgery, chemotherapy and radiotherapy, LP was apparently well for a while. She went back to her old way of life – and eating everything “under the sun.” This was what her doctor told her she could do – “Eat anything and everything you like!” As her husband said: “We would only listen to the doctor’s advice.”

When LP was asked to undergo surgery, she did not ask her doctor if surgery would cure her breast cancer. There is no reason to ask such question. Because she and her husband had total confidence in the doctors – they will do the right thing and cure LP!

Can chemo cure her cancer? LP did not ask her oncologist that very important question either.  Her husband said: “We were given the impression by undergoing chemotherapy all her problems would be settled – using the best chemo drugs, etc.  In fact the doctor said LP would be better off if she would continue receiving Herceptin for another two years! Take note, LP paid about RM 15,000 for a cycle of Taxol and Herceptin. Perhaps if LP could afford the Herceptin treatment for two more years she would have done it not realizing that Herceptin does not cure anything!

I asked LP: “What was your health like before and after treatment? Which one was healthier? The husband replied: “Before receiving all the treatments.” LP said: “With a large tumour in my liver, I am not any better at all.” In simple language, by going to the hospital and spending all the money and receiving all the so-called “scientifically proven” treatments, LP was worse off in health than if she were to do nothing. That was the impression I got from the replies of LP and her husband. Is this not a tragedy?

Let me zero down on the CT scan report dated 11 November 2009. This was the CT scan done before LP underwent chemotherapy. It said: “The liver is enhancing homogeneously with a few small cysts within less than 5 mm in diameter. Impression: No metastasis in the chest, abdomen or pelvis.”

From this report, as far as the oncologist was concerned, the cancer had not spread to her liver or any other parts of the body. A few months after LP had chemotherapy and radiotherapy, a 3-cm tumour was found in her liver.  What had gone wrong? What had caused that tumour to appear so soon?

I proposed two possibilities – you decide which possibility makes sense.

Some important questions to ask: Oncologists tell patients that after surgery, chemo is necessary to “mop up” all the remaining bad cells left behind floating in the blood stream. As a result LP was given 5-FU, epirubicin, cyclophosphamide, Taxol and Herceptin. If the cancer cells were already in the liver, obviously these expensive drugs   did nothing at all! If the cancer cells were not yet in the liver before the chemotherapy, did it not imply that the liver was weakened or damaged to the extent that cancer cells were able to make a new home in her liver? For the radiation treatment, the fact is obvious. The radiologist used the “gun and fire power” but they aimed “blindly” at the breast while the cancer cells might have already been in the liver! Target missed.

When the PET-CT scan in December 2010 showed a 3.4 x 3.0 x 3.0 cm lesion in the liver, the doctor advised surgery to remove it – only surgery, no chemotherapy was indicated. LP refused. I asked her why she refused to follow her doctor’s advice this time. She and her husband had lost faith in her doctor.

Unfortunately, LP and her husband had learned a bitter lesson the hard way – and probably a bit too late.

I recall what my dear friend, the late Mr. Chew, said: “I went to the oncologist. I saw so many people doing chemotherapy, and so many people doing radiotherapy. In my mind, this must be the correct way. So I went back to the oncologist and asked him to do chemo for me. Later, when I suffered a recurrence and the tumour grew in size, I then realized that I was on the wrong track.”

I told LP this: “Don’t worry – we will do our best to help you. You are not the only one who got into such a mess. Many others are like you too. So take it easy.” I said these words because I understand that spiritually all of us are here on Earth to learn certain experiences. In this learning process, we do make mistakes. At the end of it all, whether we do it right or wrong, we still die.

CA Care was started in 1995 – we’ve been around for sixteen years now. Almost all people who came to seek our help were medically written off or were in a similar situation like LP – where medical treatments had failed them.  Our experience showed that there are two types of people. One, the desperate but sincere ones who came to seek another avenue out of their predicament – like my good friend Chew mentioned above or for that matter, LP. After talking to her and her husband I felt she was the kind of patient we like to work with. Unfortunately, there is another group of people who come “shopping” for instant “magic bullets’. In spite of the fact that they have spent thousands and thousands of dollars paying their medical bills, they want healing on their own terms.  Our statistics showed that 70 percent of those who come to us fall into this category.  We find it extremely hard to help this group of people.

What we teach our patients about diet is in direct collision course with what oncologists tell their patients.  We have written numerous articles about this matter and you can read some of our articles by clicking this link:  http://ejtcm.com/category/dietnutrition/

In his book: Weather warfare – the military’s plan to draft Mother Nature, Jerry Smith wrote: “In order to change, science (and individual scientists) must admit fallibility – something that most people of education are reluctant to do. Who wants to admit they were wrong? How much harder would it be to admit being wrong if advancing your career depended on your being right? Also, position within the scientific community (and grant money) does not go to mavericks. This institutionalized resistance to new theories has resulted in it routinely taking from 50 to 100 years for new discoveries to move from ridiculed “nonsense” to revered facts.”

In spite of the thousands and thousands of research showing that diet plays a vital role in cancer cure, doctors are telling their patients to eat anything they like! Perhaps it will take another 50 to 100 years more for the medical community to fully appreciate this fact and come to terms with it.  For now we need to be content with the voices of some brave souls who dare to speak up.