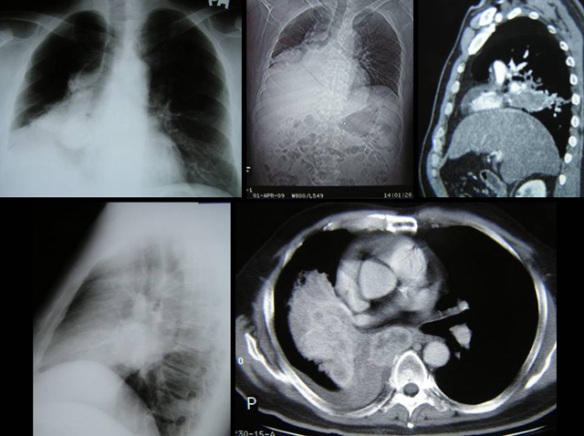 He wrote, “This problem (heart failure) was detected in February 2011. And the doctor advised me to stop Sutent indefinitely. Now, I am looking for an alternative treatment. Hopefully you can help me.”

My father, from Malacca who visited you last Friday (27 May 2011) at Penang was admitted to Melaka General Hospital today. He doesn’t have energy to walk, lost the power to speak and see everything in blur ways. May I know what causes all these? My mother gave him the herbal tea to drink as you told. And he lost his appetite. Thus when the doctor checked his sensitivity, his left side of body is less sensitive than his right side of body. Are these the symptoms of having mild stroke? Hope you can reply me as soon as possible. Thank you.

Reply: I cannot tell you exactly what happen — because I am not there to know what actually was going on … even more so when after all the drugs that he was taking …. he is the one who took Sutent and got the heart attack right?

My father’s cancer cells from the kidney which spread to the lungs a few years ago, now has spread to his brain. I found this from the doctor after doing the CT scan yesterday. The doctor says that there are many white spots on his brain and he has a high level of calcium. Doctor says that maybe it has spread to the bone too, but unfortunately, they don’t have the machine for the bone scan in Melaka General Hospital. And, my father keeps on complaining about his headache. What should my mother and I do right now?

Reply: I think I have already told you this … from the Kidney it goes to the lungs and from the lungs it goes to the brain. That is the way it goes and Suntent makes things worse. I am in the US now and shall only come home in July. I really don’t know what else to say.

Lessons we can learn from this case

1. Surgery does not cure any cancer. It is a big mistake to think that after a surgery, the cancer is gone. It is most unfortunate that patients are not forewarned of this possibility of recurrence.  Even if you are told that the cancer has all been taken out, please take this with a pinch of salt! The cancer can come back again. And if you are told to go home and eat anything you like, remember that may not be a good advice at all as in this case. Read another story, Kidney Cancer Part 1: Get it removed! …….

2. MF was on herbs for more than a year. He was not getting worse. He said he was not getting better either. For sure, he did not suffer during those months while on herbs. Also he did not have to spend RM 51,000 on the herbs. MF turned to Sutent and he took the drug for over a year. He had to endure all the side effects. Sutent consumption had to be stopped after his heart was damaged. Which is more beneficial – the so called unproven herbs or the so called scientifically proven Sutent? In addition to those side effects, he had to fork out RM 51,000 –  worth it?

3.  After about four months on Sutent, the CT scan showed the lung mass became smaller. The CT scan report reads, “good response to chemotherapy as evidenced by significant reduction in size of the lung metastases”. Unfortunately, reduction in tumour size (although accepted by the US-FDA and medical community as an indicator of effectiveness) is meaningless. After a prolonged consumption of Sutent, in February 2011, MF suffered a heart failure and the doctor advised MF to stop taking Sutent indefinitely. So ended this sad story about Sutent.

4.  Before taking any chemo drugs – this is our advice to all patients. Ask some basic questions first  — such as, Can the drug cure your cancer? What are the side effects of the drugs?  Check with the internet to verify the information provided to you by the doctors.  Be reminded by what Professor Jane Plant said (in Prostate Cancer, page 231), “Much of the advice given to us, even from some government sources, cannot be regarded as reliable, because of the overwhelming influence of vested-interest groups. We must, therefore, rely very much on ourselves and our own efforts to safeguarding our health.”

Below are information obtained from the official website of the Sutent company http://www.sutent.com/

The possible side effects of Sutent are

I accessed this link on 18 September 2011: http://www.druglib.com/adverse-reactions_side-effects/sutent/seriousness_death/

Cases resulting in death (704). You shall see the entry like this …