Dr. Turner had her first brush with cancer when she was 3 years old. Her uncle had leukemia and died in spite of undergoing chemotherapy. She wrote, “that’s when I learned that daddies could die of cancer.” Then when Kelly was 14, her 16-year old friend died of stomach cancer.  “I would go to his grave site regularly to leave flowers. His death taught me that absolutely anyone could die of cancer, at any time.”

After graduating from Harvard University, Kelly became a volunteer in the pediatric wing of Memorial Sloan-Kettering Cancer Center in New York City. “All I did was play Monopoly with some children who were receiving intravenous chemotherapy, but the depth of meaning I felt by helping them forget about their diseases for a few hours was truly life-changing. I knew I had found my calling.”

Kelly went on to do her Ph.D. at the University of California, Berkley. Her research passion — studying why people recover against all odds without the help of conventional medicine, or after conventional medicine has failed.  She called this Radical Remission. For her research she made a  trip around the world, traveling to ten different countries to interview holistic healers and cancer survivors about their healing practices and healing. She presented the gist of her research in her book, Radical Remission – surviving cancer against all odds. 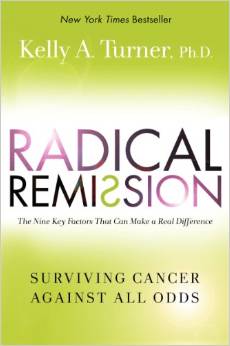 I recommend all cancer patients and all those involved with cancer (medical doctors or alternative healers included) to read this no-nonsense book. You can learn many things from her extensive research.

Let me highlight some of the points Dr. Turner wrote in the Introductory chapter that resonate so very well with me (in fact not with me alone but any scientist for that matter).

1. She wrote: “I was reading Dr. Andrew Weil’s book, Spontaneuous Healing when I came across a case of what I call Radical Remission. I froze, confused and stunned. Had this actually happened? If so, why had it not been on the front page of every newspaper? Even if it had happened only once, it is still an incredible event…. Intrigued, I instantly began trying to find other cases of Radical Remission. What I found shocked me. There were over a thousand cases in print.”

2. “The more I dug into this topic, the more frustrated I became.” Doctors were not interested to know about why their patients suddenly “heal” themselves even after all medical treatments failed.

3.  “The final straw for me though, was when a few of the radical survivors told me that their doctors had actually asked them  not to tell any other patients …. about their amazing recoveries. The reason? So as not to raise false hope.”

4. “When I first began studying Radical Remission” I was surprised to find that two groups of people had been largely ignored…. The first group was the radical survivors themselves ….. none of the authors reported directly asking the survivors why they thought they had healed. I found this very odd, given the fact that the survivors may have done something …that helped to heal their cancer… The second ignored group … was alternative healers … I was surprised no one had studied how non-Western or alternative healers treat cancer.”

a. Radically changing your diet.

b. Taking control of your health.

i. Having strong reasons for living.

….these are not listed in any kind of ranking order. There is no clear “winner” among these factors.”

We started CA Care in 1995 with the following basic approach to the healing of cancer. 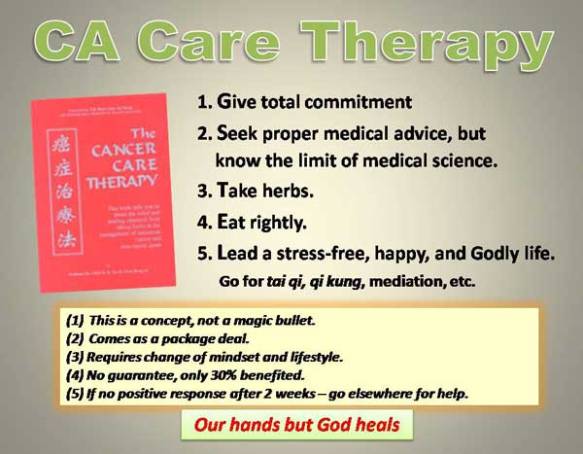 Indeed the various key factors that Dr. Turner found important among radical survivors reflect closely with what we have been teaching patients at CA Care for the past 18 years.

When I reflect deeply the work of Dr. Turner, I cannot help but come to the conclusion that in this world there are indeed truly blue blood scientists and there are also pseudo-scientists who believe that they know a lot of science.  These pseudo-scientists would brush off anything that does not conform to their world view as hocus pocus, unproven or unscientific – all in the name of science! Such people may even say, “Don’t tell me what you do to get well. I don’t want to know.” Even worse, some (according to Dr. Kelly) did not want others to know about their patients’ unique healing experience.

Read what Dr. Turner has got to say about this, “… In my first research class at UC Berkeley, I learned that it is a researcher’s scientific obligation to examine any anomalous cases that do not fit into his or her hypothesis …. there is absolutely no scenario in which it is okay to ignore cases that do not fit into your hypothesis…. (It is) scientifically irresponsible to ignore flat-out the people who have cure their cancers using unconventional means.”

To be a blue blood researcher you must have the guts to follow and tell the world where your research data lead you to. Do things based on your love for knowledge and truth, not driven by self-interest. Perhaps many readers are not aware that there are such thing as fake research and fake data. Dr. Sydney Singer reminded us, “Researchers are like prostitutes. They work for grant money … they go to where there is money.” Dr. Samuel Epstein, professor of the University of Illinois Medical Centre told the US Senate Select Committee, “In this country you can buy the data you require to support your case.” Dr. John Braithwaite said, “Data fabrication is so widespread.”

I see the honesty and integrity of Dr. Turner’s work. She wrote, “It is not at all my intention to raise false hope by writing this book… However, keeping silent about Radical Remission cases has led to something far worse, in my opinion, than false hope…. Giving false hope means making people hopeful about something that is untrue or false. Radical Remission cases may not be explainable – at the moment – but they are true.” To Dr. Turner, we just cannot afford to ignore this phenomenon even if we cannot understand and explain why Radical Remission worked in some people and not in others. A truly blue blood researcher would take on the task of expanding boundary and not be contented to be confined to a comfort zone. Sticking out your neck against mainstream thinking has its risk but then remember only dead fish flow with the stream. This world has enough of “Yes” men and women.

Some years ago, I once asked a young man why he wanted to do a Ph.D. His answer shocked me, “I want to have a Dr. in front of my name.” It is indeed sad. Way back in 1973, when I was a Ph.D. student, my professor taught me that Ph.D. means “lover of knowledge.” Make no mistake about this, if you want to be truly a blue blood researcher or scientist, you need to have the passion, commitment and inquisitive mind like Dr. Turner. Just wanting to have a Dr in front of your name will not do.