At the 3rd Malaysian International Conference on Holistic Healing for Cancer organized by Cansurvive Centre Malaysia (www.cansurvive.org.my) in October 2013, we met an Australian lady who introduced us to the above book written by an Australian cancer survivor, Barry Thomson. The book, for some strange reason is only available from the publisher in Queensland or from the author (www.defeatcancertwice.com).

In April 2003, Barry Thomson, a businessman, was diagnosed with two primary concurrent melanomas. This meant that he had two separate deadly melanomas, each with the potential to spread and develop secondary melanoma. Basically, this doubled his chances of dying from melanoma cancer. His own family doctor twice advised his wife to “sell your business and do anything that you have ever wanted to do.” Clearly he believed that his two melanomas would prove to be terminal. His only chance to beat melanoma was to find his own cure or he would surely die.

Barry was also told by a leading oncologist, that no treatment was available as chemotherapy and radiation are ineffective against melanoma. Barry was grateful to this HONEST oncologist who made him realize that he had to seek healing utilizing natural therapies.

Barry admits that, in 2003 he had (and still have) no medical background or training as he started a frantic search for information that would show him how to use natural therapies to become free of melanoma. His own extensive research, plus information from numerous books by cancer survivors and others, enabled him to compile a cancer fighting regimen which helped him to defeat his melanomas.

This resulted in his first book, “Join Our Escape from Death Row-Cancer Jail” which was publish in late 2007. (Website: www.cancerjailescape.com).

In June 2008, Barry had to battle terminal cancer for a second time. He was diagnosed with bowel cancer (also known as colon cancer) which totally blocked his large bowel. He underwent successful surgery to remove the tumour but, due to twists in the small bowel preventing intake of food, he underwent a second emergency surgery twelve days later. Extremely ill, he spent four nights in Intensive Care and was lucky to survive. He spent a total of 33 nights in hospital.

In March 2009, Barry had a third major surgery to rebuild his stomach and repair an incisional hernia and abdominal muscle separation. Subsequently, Dr. Matthew Carmody, his surgeon, told him that “100% definitely” he had cancer cells in his lymph system. He strongly recommended six months of chemotherapy for a “27% better chance of beating the cancer.” Barry declined and decided to use his experience in overcoming his melanomas in 2003 to eliminate the bowel cancer cells.

Colonoscopies in May 2010 and July 2012 showed NO POLYPS and NO CANCER. In July 2012 Dr. Carmody told Barry “Forget bowel cancer. You have certainly beaten it. See me again in six years for the sole purpose of checking for polyps with a colonoscopy.” It is now more than five years since his original diagnosis of bowel cancer.

After defeating melanoma and bowel cancer, Barry continued his research to find more and more effective natural cancer attackers. He gained a wealth of new and superb cancer-fighting information. In 2010, he felt it would be appropriate to write a second book to share this additional knowledge he had acquired with people fighting cancer.

It is not the intention of this review to discuss  all the natural healing methods that Barry Thomson used to heal his melanomas and bowel cancer except to mention that some of the modalities that he used included hyperthermia, the Gerson therapy, Cantron, the Dr Johanna Budwig Cancer protocol, hydrogen peroxide, Cansema for skin cancer and proper nutrition. The book also lists other natural healing methods that Barry has researched and found useful such as far-infrared saunas, herbal teas, probiotics, juicing, wheatgrass and other sprouts, getting rid of parasites, etc

We do not intend to discuss the merits or demerits of Barry’s healing methods except suffice to mention that when one is diagnosed with cancer (any form of cancer), one has a wide choice of healing methods. The usual so –called “scientifically tested” protocols of chemotherapy and radiation, etc is just one of the many methods to heal cancer. You certainly do have choices just like Barry Thomson and many others.

Do read and investigate further first before you jump into the bandwagon (of conventional cancer treatments). As Barry said…”the true facts of the situation are that, while still in total shock over their cancer diagnosis, patients are very quickly rushed into chemotherapy and/or radiation treatments”

There are a lot more books and websites on complementary/integrative cancer treatments but doctors will invariably brush this aside as “quackery,” “unproven, unscientific,” etc. and they will definitely not recommend you to read them.

If you have been diagnosed with cancer and standing at a big T-junction and not knowing whether to turn left or right, we recommend that you read the following two new books by Dr Chris Teo, the founder of The Ca Care Therapy…visit www.cacare.com

CANCER: IS THERE ANOTHER OPTION? 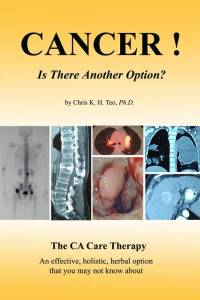 Both books will give you an idea of a holistic, herbal option that you may not know about.