EK (S-617) is a 62-year-old Indonesian. She was diagnosed with breast cancer in 2008. Since the lump was too big, surgery was not indicated. EK had to undergo 6 cycles of chemotherapy and 35 times of radiation treatment. The lump in her breast became smaller.

EK was then prescribed Tamoxifen which she continued to take for 6 years! EK went to see her doctor every 6 months for routine checkup. Everything was okay. But in 2013, i.e. about 5 years later, EK had difficulty breathing. The doctor said there was fluid in her lungs but he did not say that it was a metastasis.

EK went to see another lung specialist who tapped out the fluid. This was done twice. In March 2014, EK was told that everything was good.

Unfortunately in  July 2014, again there was fluid in her lung (picture below). EK had to do pleural tapping for the third time. Once again the doctor did not say it was a metastasis. 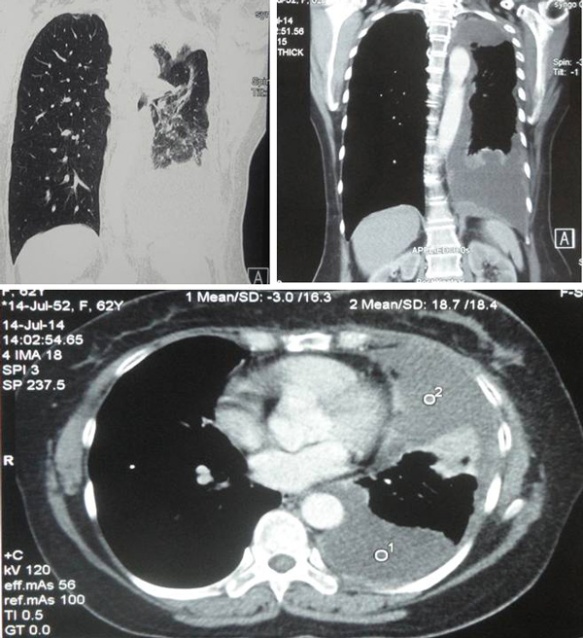 Not knowing what to do, EK and her daughter came to seek our help on 10 August 2014. She presented with the following:

EK was prescribed: Capsule A, C and D besides Breast M, Lung 1, Lung 2 and Lung Phlegm teas.  For her stomach wind EK was asked to take Gastric Paste herb; and A-Kid-6 tea for her frequent urination at night.

EK decided to stop taking Tamoxifen and just relied on our herbs.

After taking the herbs for about 3 weeks, EK came back to see us again on 5 September 2014.  Acugraph reading showed tremendous improvements in her energy meridian. All her meridian energy levels, except SI, were normal.

Listen to what she has got to say (Bahasa Indonesia) in the videos below.

Acknowledgment: Consultation and acugraphing at CA Care are provided to cancer patients free of charge. We express our sincere thanks to Dr. Adrian Larsen, President of Miridia Technology Inc., USA, for his generosity in donating a unit of AcuGraph 4 for our use at CA Care.