Within the first three weeks of March 2015, six patients came to seek our help. Each had his/her own tragic story to tell. By documenting this story it is our hope that you or your loved ones can learn something more than just “going to the doctor or healer” to seek treatment.

John (not real name) is 28 years old. His problem started sometime in August 2013. He felt dizzy while cycling and wondered what went wrong. He had another episode in May 2014 after he exerted himself. Otherwise, John was a very active person who did a lot of running and cycling.

A chest CT angiogram on 25 May 2014 showed clotting and extensive blockage of the arteries in his lung. The next day John underwent an operation. Unfortunately “the tissue appeared to be organised and adherent to the vessel wall, that was difficult to remove the “clot” in the right pulmonary artery. Histopathology report showed thromboembolus, without evidence of neoplasia.”

John went home, after his hospitalization, with nine types of drugs: Warfarin, Lasix, Hydrochlorothiazide, Digoxin, Sildenafit, Pantoprazole, Enoxaparin and Xarelto. Everything went well for a while.

Some months later, problems cropped up again. Could it be a heart problem? In December 2014, on the recommendation of a close relative who is a medical specialist, John went to a renowned hospital in the US for further treatment.

On 2 January 2015, John underwent surgery again.  A large amount of proximal tumor was resected but some residual gelatinous material could not be removed. Intraoperative pathology was consistent with a sarcoma.

Fortunately, with aggressive supportive care John recovered and by the 13th day he was out of the ICU.

John was referred to an oncologist who suggested adjuvant chemotherapy with AIM (dexorubicin, ifosfamide and mesna).

The total cost of John’s US medical treatment was about USD 100,000.

John returned to Malaysia and went to a cancer hospital. He was similarly told that he would need chemotherapy, initially 3 cycles to see how he would respond to the treatment.

Somehow, John and his parents end up at CA Care Centre in early March 2015.

This is indeed a hard case to handle. If you believe in medical treatment, then we would think the logical thing to do is go for chemotherapy — irrespective of whether you like it or not, or whether chemo would cure you or not!

It is “dangerous” for us to tell patients to take our herbs and follow our diet therapy if patients and their family members come to us wanting to find the “magic bullet.” We don’t have any magic bullet.

Let us pose one question here: What … after following our therapy, the cancer does not go way?” Are we going to be blamed — held responsible and made a scapegoat? After all, to most people, alternative medicine is unproven, unscientific and just quackery!

Our core belief in handling cancer is that: We cannot cure you. You cure yourself.  We guide and provide you with the tools for your healing journey. But ultimately you are responsibility for your own healing. We know this is something not all patients who come to us understand or are looking for. They want us to cure them!

We tell John up front that this is the first time we hear of lung artery sarcoma. Such confession would be enough to make most patients run away! It is better to be crystal clear from the start that we are here to help you, not to mislead you.

However, let us share with you one success story — another equally rare sarcoma case which we had seen for the first time. 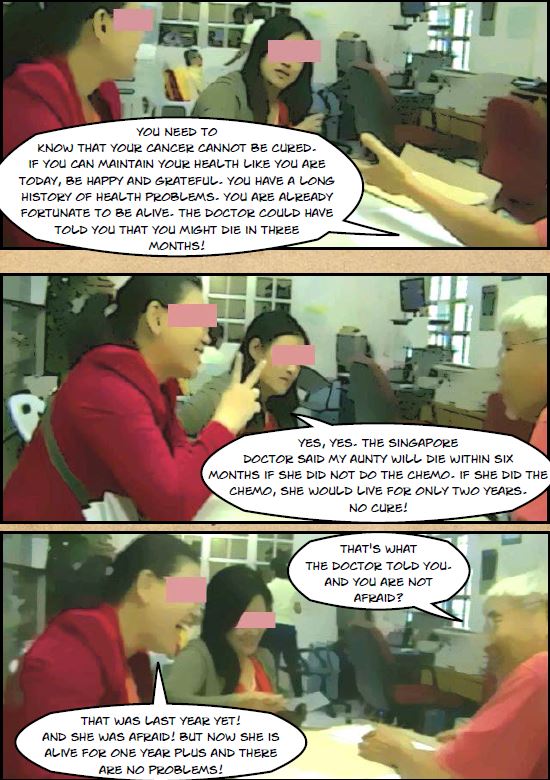 We are indeed surprised that we could help this lady. It has been almost 3 years now and she is still doing fine. During the last visit, she came to our centre with three medical doctors. One of them is her sister! I asked the patient in front of her sister: When you first came to see us, you refused chemotherapy and opted for herbs. Did you sister ever objected to you following our therapy? Her answer: Yes, she strongly objected.

Seeing and experiencing it is to believe. Now, her sister and two other medical doctors came to seek our help because they believed in what they saw!

Why are we able to help this patient? When the patient first came to seek our help, she was helpless. Deep in my heart I felt hopeless but I kept that to myself. I told the patient, I cannot cure your cancer. I can only do my best to help you. Did she run away upon hearing this? Most patients would but not this patient. She knew what she did not want to do — I don’t want chemo! She wanted to follow our therapy. No two ways about that. She did not doubt what she wanted. She was determined and committed to find healing for herself. She did not come to seek the non-existent magic bullet. Let us celebrate and praise God for this wonderful blessing. She had found her healing.