Three ladies, one after another, came to seek our help in early March 2015. All of them had breast cancer. They had undergone medical treatments. And now they needed help because modern medicine did not cure them. By writing their stories, perhaps others may learn some lessons?

Patient No: 1.  Mary (not real name) is 52 years old. She is a medical doctor.  Her hair was thick, straight black. Actually it was a wig.

In September 2011 (47 years old then) Mary was diagnosed with breast cancer — an invasive ductal carcinoma. The tumour was 3.5 cm in size. She underwent a mastectomy. Eight of 12 lymph nodes were involved.  It was a triple negative (negative for estrogen, progesterone and Her2) cancer, Stage 3A (pT2N2Mo).

Mary had 8 cycles of chemotherapy using Doxorubicin and Paxus (Paclitaxel). In addition, she received 25 sessions of radiotherapy.  May was well.

Two years later, December 2013, the cancer recurred. There were many nodules, 0.3 to 8 cm in diameter, in the previously cancerous breast. There was a 1.5 cm node at the arm pit.

Mary again had 6 cycles of chemotherapy using Taxol and Gamzar. Unfortunately this second chemo treatment did not cure her! The cancer came back again.

Mary received another 6 cycles of chemotherapy using cisplatin. The treatment was completed sometime in February 2015.

In March, came to see us with one of our patients (who had refused chemotherapy for her cancer and now doing well).

Patient No: 2. The next day, Sally,  a 59-year-old lady, came to seek our help.  She had left breast cancer 6 years ago and had a mastectomy. She declined chemotherapy and radiotherapy. She took Tamoxifen for 5 years. Actually, Sally came to see us earlier and was started on the herbs for a while and then “disappeared”.

Sally said she saw her doctor every six months for routine checkup. Everything was okay, until 11 March 2015 when a CT scan showed the cancer had recurred.

The doctor asked Sally to go for chemotherapy to be followed by removal of the tumour in her liver by surgery.

Patient No:3.  The next day, 44-year-old Amy (not real name) came to our centre. She did not look good at all.

Sometime in March 2011, Amy had a small lump in her left breast. A mastectomy was done. It was a Stage 2 breast cancer. This was followed by 6 cycles of chemotherapy and 30 sessions of radiotherapy. Amy took Tamoxifen for 2 years.

Barely two years later, December 2012, the cancer spread to her liver. Amy had 6 cycles of chemotherapy again. In addition, she received 15 radiation treatments to her liver.

A CT scan in May 2014 showed more nodules in her liver (pictures below). The cancer had also spread to her bone. Amy received bonefos injection for her bone metastasis.

(I am from Jakarta. My sister was diagnosed with metastatic liver cancer.  Everyday her stomach swelled and is filled with fluid. She had pains in her chest. Tonight we are flying to Penang. Do I have a chance to consult with you on Friday (tomorrow)? We really need your help.)

If the 3 stories above are not good enough, let me share with you 3 more stories to make it half a dozen!

Patient No 4. About the same time I was writing this article, I received this e-mail below.

…. I would like to update you and seek and advise from you with regards to my mum’s health report recently.

My mum’s cancer marker has apparently gone up quite a bit recently and the doc said that there are tumours growing quite rapidly in her body. That explains why the cancer marker is high.

The doc asked if my mum has been taking any other medication that is causing interference with his. And he immediately changed my mum’s medication from tamoxifen to Exemestane Aromasin 25mg per tab and he is trying to see if the new medication can help control her tumour growth.

How is this new medication different from tamoxifen? The nurse warned my mum about all the side effects. My sis advised my mum to stop taking your herbs and see if there is any improvement with the western medication alone cos she also believes that there could be that possibility of your herbs clashing with the oncologist’s prescription.

I personally is against the idea of my mum stopping your herbs temporarily.

Doc mentioned since last year that cancer has spread to her bones and there are tumours found around her chest outside her lungs and other parts of her body too. He said it was a good thing that it didn’t spread to her organs.

I’m a little worried that my mum will eventually feel the adverse side effects of her new medication if she continues with it and not take your herbs. I’m really concerned.

Anyways, no matter what the doctor said and her deteriorating condition, my mum is still in high spirits and her appetite is well and she still goes to church and play mahjong with her friends regularly like a healthy person. Her strong belief in God keeps her in good spirits too. Do you think it’s time to bring her to come see you soon and it’s time to re-evaluate her herbs?  God bless.

(Note: This patient had breast cancer. She underwent a mastectomy followed by chemotherapy and radiotherapy. In addition she took Tamoxifen. To play safe, she also took our herbs. Both medical treatments and herbs did not physically  cure her … her cancer spread. However, “emotionally” she seemed alright and could live a normal life).

Patient No 5. Earlier we have posted this story in our website, Breast Cancer: Do this chemo – 100 percent cure! You believe that?  June (not real name), a 32-year-old, was diagnosed with breast cancer and had a mastectomy. She was asked to go for chemotherapy: 4 cycles of andriamycin + cyclophosphamide, 12 cycles of Taxol, one year of Herception plus taking oral Tamoxifen for 10 years!

The total costs of the above treatment (excluding Tamoxifen) is approximately SGD 120,000, which is about RM 300,000.

The oncologist told  June that if she did not do this recommended treatment, her cancer will recur within the next 2 to 3 years. The cancer will be all over the body and she will die! But if June were to undergo chemotherapy as suggested by the oncologist she will achieve a 100 percent cure!

We asked June if she believed what her oncologist told her. June replied, “No, because I have done my homework. I know that cancer cannot be cured.”

We leave it to you to draw your own conclusion about “professional experts”. Are they after your money or your cancer? Do they tell you the whole truth or do they behave like what Dr. Mendelsohn had warned us: 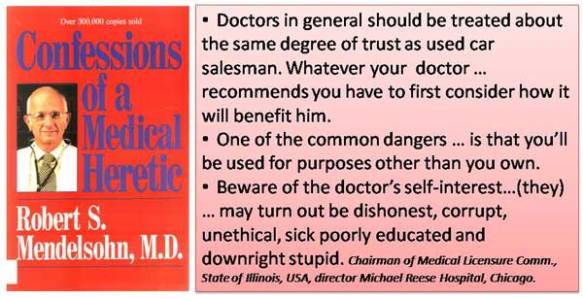 Patient No 6. This story is also posted in our website, Breast Cancer: When a so-called “cure” was not a cure  In this case, due to a thumb-sized lump, MT had a mastectomy followed by 6 cycles of chemotherapy and 30 radiation treatments. She took Tamoxifen for 5 years.

MT was told by her doctor that her breast cancer was at an early stage and that she had a 90 percent chance of complete cure with the treatments that she had undergone. MT believed her doctor and did exactly as what was told. Each year she came back to her doctor for routine checkup. At every visit she was told that she was fine.

After 5 years, MT was told to stop Tamoxifen because she was already cured.

But barely a year later, in April 2011, MT started to have pains in her tail bone and shoulder blade. Then her legs started to hurt as well. She became breathless and was unable to walk far. MT returned to her doctor and was told that  her cancer had recurred in her bone and lung.

MT asked her doctor why the cancer recurred. The doctor’s answer,  “ I do not know why. But don’t blame yourself. It is your fate.  Also the recurrence has nothing to do with what you eat. It is just your fate.”

The recurrence was just due to her luck? It is like saying “Up-There Someone” was running a casino. The destiny of mankind down-here was determined by the rolling of a dice. It seems  more acceptable for the educated to promote this theory than admitting that “scientific medicine” had failed her.

But here are some rare, honest but blunt opinions which you may wish to ponder on:

Let us end by reflecting on what one of the world’s greatest minds has got to say: