Jenny (not real name) was 44 years old when she found a lump in her right breast. A mammography done in a Singapore hospital on 21 December 2009 indicated no mammographic evidence of malignancy.

An ultrasound done on 22 December 2009 in another hospital showed the following:

A lumpectomy was done and the histology report showed:

In September 2010, Jenny and her husband came to seek our advice. We told Jenny to go and have her entire right breast removed. She hesitated and we did not get to see Jenny again until 5 years later.

In November 2015, Jenny and her husband came to seek our help again and shared with us her IDR 4 billion adventure with the oncologists in Singapore.

Listen to our conversation that day.

Husband: Dr. Chris asked to go for mastectomy. My wife did not want to go for the operation. She had chemo.

C: Wait, first there were lumps in her breast. Why did you not want to go for operation?

C: After you consulted us, you went home and then went to see an oncologist in Singapore. You had chemo. Did you ask if the chemo was going to cure you?

C: Oh, that oncologist guaranteed that the cancer could be cured? Another breast cancer patient also went to this same oncologist — also guaranteed a cure! But unfortunately, after chemo and more chemo the cancer went to her brain. She eventually died (see story under comment). So for you, chemo after chemo — also can cure?

H: The lump was gone.

H: Normal but the oncologist kept wanting us to have more chemo. So we ran away from that oncologist.

C: Why did you run away from that oncologist?

H: Cannot afford to pay anyway — we were bleeding financially.

C: Oh, you ran away because you could not afford paying for the treatments. That was after how long of receiving the chemo?

H: Almost one to one and half years of chemo like in the chart below (chart prepared by husband). 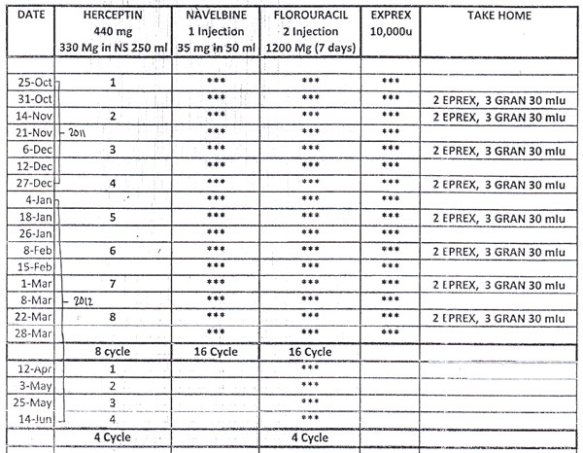 Another oncologist: Don’t worry. We have a lot of medicine to treat you!

C: You ran away from the first oncologist and found another one. This oncologist once told a patient, “Don’t worry, we have a lot of medicine to treat you!” And this oncologist gave you one drug after another? When one medicine is not effective, change to another one? So you were started on oral drugs. Was it cheaper?

H: Ya, much cheaper because my wife just need to swallow the pills.

C: Did you ask the oncologist if the medicines were going to cure you?

C: How long were you taking these medicines — one type after another?

H: A long time, from January 2013 to November 2015. When the first round of oral drugs failed, the oncologist started her on Herceptin injections as well. 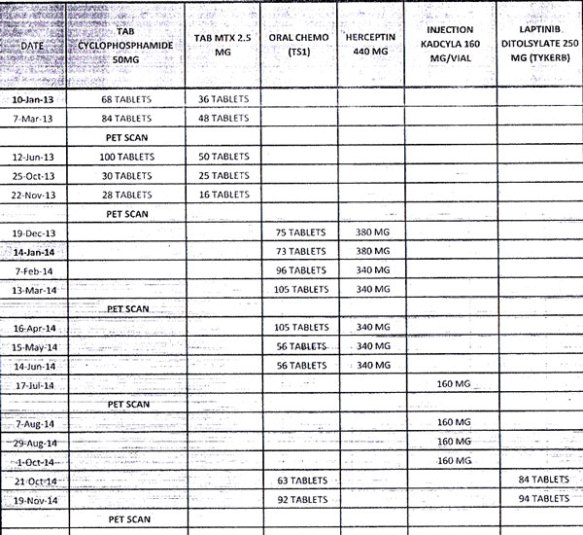 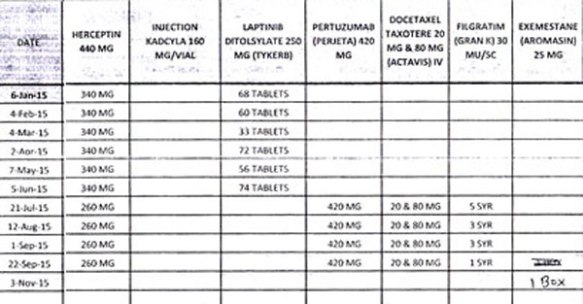 C: What happened after taking all those oral drugs for more than a year?

H: The cancer came back again. The oncologist then started her on Herceptin injection again. She had a total of 7 injections.

C: Did you ask if this kind of injection was going to cure her?

H: The oncologist said the medicine given earlier did not work. Because of that the medicine had to be changed and changed. After one medicine failed another different medicine was tried. Then the doctor tried Kadcyla injection. This too did not work and the doctor changed to lapatinib. After lapatinib failed it was back to chemo injection again.

C: Then what eventually happened?

H: When the cancer did not go away in spite of all those treatments, Jenny had to remove her breast. After the mastectomy the doctor wanted to continue giving her chemo again — more Herceptin and pertuzumab (Perjeta).

C: I am really confused!

H: Me too. I also know that Herceptin can adversely affect the heart.

C:  When you first came to see us, I asked you to remove your breast. But you did not do that. You opted for chemo. Then after chemo and more chemo and also spending a lot of money you also lost your breast. How much did you spend for all those treatments?

C: Do you think the oncologists are good?

J: More and more chemo, until we have no more money!

When injecting toxic chemo drugs into patients, the oncologists also gave their patients Eprex and Gran. These are blood boosting shots. Perhaps this was done as a precaution because chemo could make the platelets, red and white blood go down. Perhaps too this is also a way to keep patients happy and well. Of course patients pay for such injection. But what is not known to patients is that this “red juice” and “white juice” may encourage tumor growth! Dr. Otis Brawley is an oncologist. Read what he wrote below: 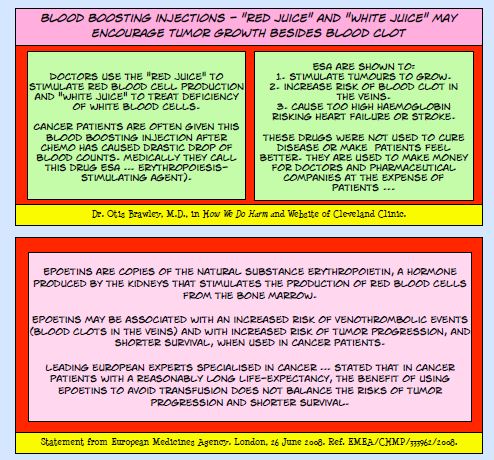 2. We have a lot of medicine to treat you! 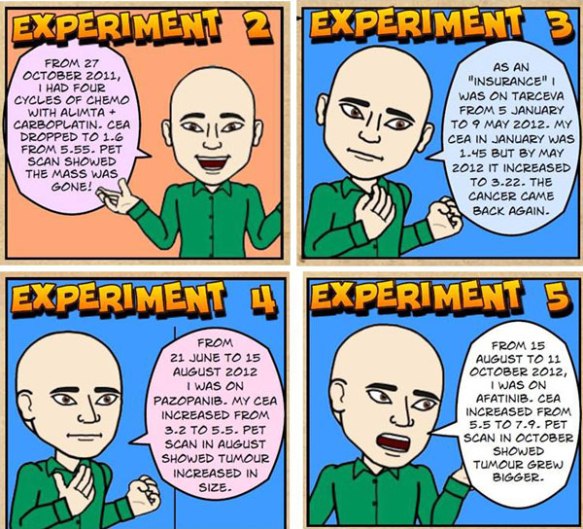 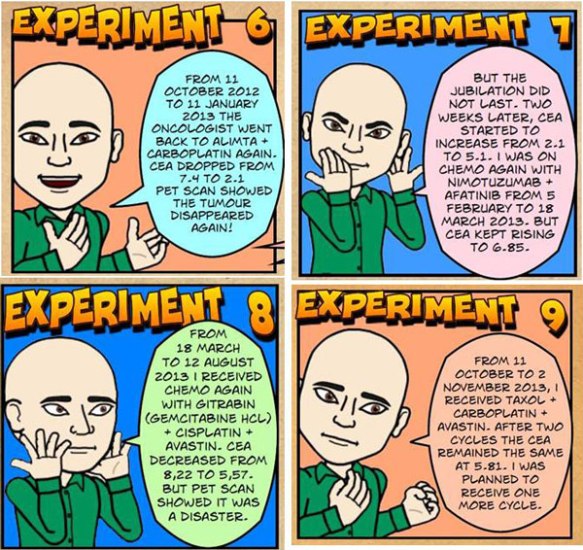 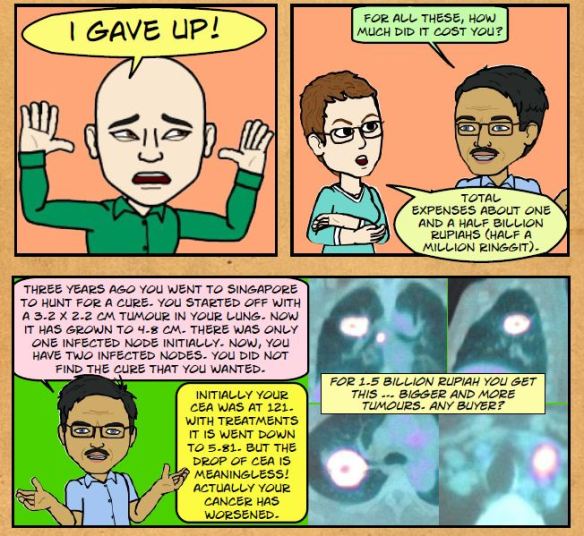 One final note. IDR 4 billion — I could not imagine how “big a sum” this is. A patient who went to China for treatment of his lung cancer also spent a similar amount. And he came home just as disappointed. According to his wife, IDR 4 billion is worth 2 bungalow houses if you live somewhere around Medan.