In the past few weeks, three liver cancer patients came to seek our help. These are their stories and we hope readers and patients can learn from their tragic experiences.

Patient is a 66-year-old man from Singapore. He did not have any symptoms. His liver function was normal but a CT scan in September 2014, showed he had liver problems. Patient was referred to a liver specialist in a government hospital. MRI was done and on 26 February 2015, patient underwent a laparoscopic liver resection of segments 5, 6, 7 and 8 of his liver. At the same time, he also had a cholecystectomy (removal of gallbladder).

In August 2015, patient underwent a second liver surgery. This time it was a wedge resection of segments 6 and 7 of his liver. At the same time FRA (radiofrequency ablation) was performed onthe tumour in segment 2/3.

Three months later, 13 November 2015, MRI showed the cancer had come back again — “interval progression of disease with numerous bilobar foci of HCC in the remnant liver.”

Patient was told another surgery was not an option anymore. He could go for TACE (transarterial chemoembolization) or a liver transplant.

Patient and his son came to seek our opinion. We told the patient: “If you come here expecting us to cure you, then we are sorry to say that we have no magic bullet to cure you!”  Patient went home disappointed.

Patient is a 73-year-old Malaysian. Sometime in December 2014, he had jaundice. A CT scan showed his liver was really bad.

On 29 January 2015 patient underwent surgery in a government hospital. His gallbladder was removed. Segment 3, 4B and left lateral section of his liver were also removed.

A CT scan on 1 December 2015, showed “innumerable arterially enhancing nodules seen in both lobes of liver. Disease in progression.”

Patient was referred to a private hospital in Penang and was offered to participate in Phase 3 Clinical Trial — Selective Internal Radiation Therapy (SIRT)  versus Sorafenib.

Can the above treatments cure patients? This patient was told it would just prolong life. Prolong for how long? No one does not seem to know! Patient was also told that he “qualifies” to participate in this clinical trial, Nexavar would be provided to him for free but he was pre-warned about the following side effects of Nexavar.

Unfortunately, his problem persisted. On 29 January 2015, his blood test returned the following results.

A CT scan on 20 February 2015, showed an ill-defined hypodense lesion in the left lobe of the liver and para-aortic lymphadenopathy. Findings are suggestive of cholangocarcinoma (bile duct cancer) and bile duct obstruction.

Blood test on 23 February 2015 showed his condition had deteriorated.

On 23 February 2015, patient underwent another operation — a left hemihepatectomy and radical choledochectomy (removal of a portion of the common bile duct). 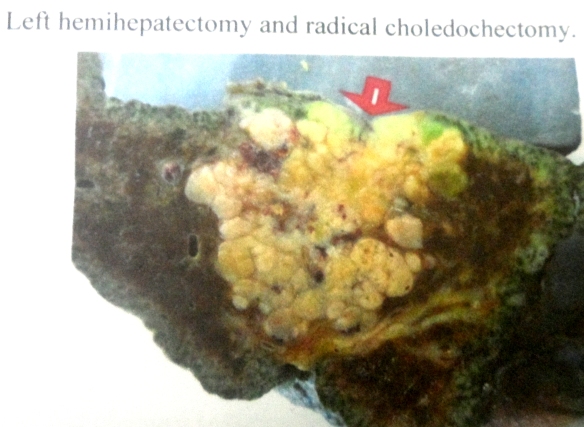 Everything seemed to work well for a while. Patient returned to his surgeon for routine check-up every 3 months. Unfortunately, 9 months later, the cancer started to recur in his liver again.

A CT scan on 7 December 2015 stated: There are “at least 9 low attenuation lesions in the right lobe of the liver, largest at anterior segment 8 measuring 4.1 x 3.8 cm. These could be due to recurrent tumour and metastases.

Patient spent RM 74,910 (covered by medical insurance) for the above failed treatment.

Like the patient of Case 2, this patient was referred to the same oncologist and was offered the following options:

If there is a tumour in the liver, the answer is probably “CUT it out”. But take note that cutting does not necessarily cure your cancer because in the first place it is not suitable for cutting — it could be too big in size or the cancer has already spread too extensively. But cutting seems to be the only sensible option.  And many patients, like the above cases, have gone through it. Disaster.

One important aspect of liver surgery which you should know is that, as in the above cases, the cancer can come back again 3 to 9 months after an apparently “successful surgery.”  Patient No: 2 spent RM 75,000 for the operation and 9 months later, 9 new lesions were found in his liver.

After surgery has failed, patients are offered the next “useless” line of defence — Go for TACE, i.e. chemoembolization, radiation or chemotherapy. The above medical textbook says, all these are not effective.

Reflect on these Quotations