A 35-year-old man came into our centre one morning in November 2018. His first words were: Pak Baktia sent you his salam (greetings). I am his nephew.

Chris: His nephew! How is Baktiar doing?

Nephew: He is doing very well. In fact he is much healthier me.

C: Amazing. When he first came here, his skin was dark, his whole body was itchy. He is really lucky and blessed. Perhaps one day I shall go to Aceh and visit him.

What is so special about this patient?

Seven Years Ago Baktia came to CA Care for Help

Baktia, 56 years old, was diagnosed with cancer of the pancreatic head and uncinate process with distal CBD (biliary duct) obstruction.

He declined surgery but underwent ERCP (Endoscopic Retrograde Cholangiopancreatography). Three plastic stents (tube) were installed to help with the flow of the bile.

After the ERCP, Bak refused chemotherapy. He came to seek our help on 10 April 2011.

He presented with the following:

Bak had fever. After taking a glass of Appetite & Fever tea, his fever was resolved.

He went home to Aceh.

Bak had to return to his surgeon every six months to change the plastic stent (tube).

On 5 October 2011, Bak said since taking the herbs in April 2011, his health had improved. He felt more comfortable, his sleep was better and he felt more energetic.

Previously he had to wake up four to five times a night to urinate. After taking the A-Kid-6 tea his urination frequency has reduced to only once a night. 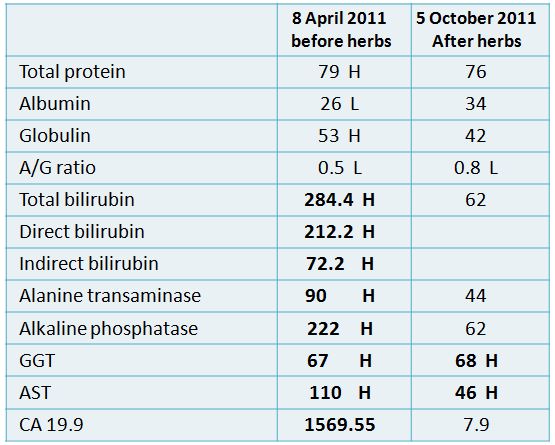 January 2015: almost four years later, Bak’s wife came to our centre. Our first question to her was, How is Bak doing now? Is he okay?

Wife: Thanks be to God. He can drive around, everywhere.

C: Before he came here, was he able to drive?

C: Has he gone back to see his doctor?

W: Yes. The stent had been removed and there was no need to replace it anymore.

C: How many times did he need to change the stent?

W: Every six months, we need to change a new stent. So we did this twice a year. In August 2014, the doctor said no need to put in a new stent anymore. If he is jaundiced, then come back to the hospital immediately.

C: All these years, didn’t  the doctor push him to do chemo?