SS is a 73-year-old male from Johor. He was a casual smoker of about 20 plus years. Sometime in early 2010, he experienced weight loss and lack of energy. There was no cough. He went to the general hospital and fainted while there. A CT scan on 13 May 2010 indicated lung cancer, as below.

SS was subsequently referred to the university hospital in Kuala Lumpur. He was started on the oral drug, Iressa, on 21 February 2011.

On 22 June 2011 another CT scan was done and the results showed:

Impression: Comparison with the previous CT scan there is progression of the disease.

A comparison study with CT was done on 26 March 2012. The results showed: 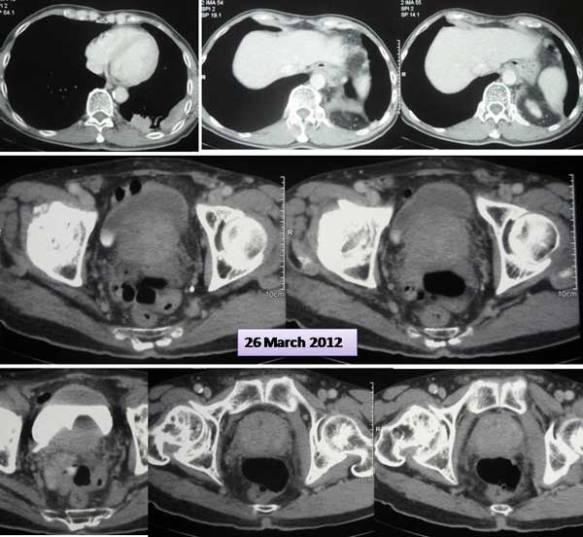 SS came to seek our help on 19 August 2012. He was told by his doctor that Iressa was not effective and about a week ago he was asked to stop Iressa and this was replaced with Tarceva.

SS had been taking Iressa for almost one and half years at a cost of about RM 7000 per month. Tarceva costs him RM 8,900 per month.

SS said he wanted to try out herbs and would not wish to continue with his doctor’s medication.

SS’s  meridian bioenergy was read using the AcuGraph (below):

There is a marked energy imbalance between the upper   (left) and lower part of his body (right). We prescribed herbs to correct the imbalance of his LU and BL energy.  SS also told us that he has problems with his prostate. Unfortunately, no one has addressed this problem. For this, we prescribed Prostate A tea. In addition we prescribed SS Capsule A, C-tea, Lung 1 and Lung 2 teas, for his cancer.

As I was writing this article, a lady from Singapore wrote:

I am thinking of going up to Penang to consult you … I was diagnosed in December 2010, with lung cancer (adenocarcinoma), with metastasis to the brain, adrenal glands, lymph nodes and bone. I took Iressa for 1 year, then switched to Tarceva when the CEA started climbing up again. CEA went down from 400+ to 28 within the first few months of taking Iressa, then plateaued for a few months and then started climbing again from December 2011. I am currently on Tarceva.

The case of SS happened in Kuala Lumpur. Now you see a similar story repeated in Singapore! I am reminded by what was supposed to be said by Einstein below:

If you are following and reading this website you will know that cases like the above are not rare or exceptional! May be the results are and can be expected to happen to you! Read: https://cancercaremalaysia.com/category/lung-cancer/

Please don’t get me wrong. I am not suggesting anyone is insane here. What I am suggesting here is: Why don’t you be a bit WISER?

I remember my friend SK. He did not go to any university but he was wise. You don’t have to be a university graduate to be a wise person! SK had lung cancer that had spread to his liver. He said: I saw the oncologist. He told me to do the chemo. When I saw everybody do chemo, everybody do radiotherapy, I told myself this must be the only way. I went back to the doctor and asked him to do the chemo on me. So SK underwent both chemo and radiotherapy. He did not get well but instead ended up with three more tumours in his liver. And they were growing in size. SK told me: I knew then that I had taken the wrong path. I started to find other ways. You can listen to his story here.

Why do people keep repeating the same, old “mistake”? Perhaps ignorance! Perhaps they are just being stubborn or even arrogant – believing that they know better! But often it is just plain powerlessness, being placed in a situation that a person does not know what else to do. SK knew he had a choice – to find other options and not repeating the same “mistake” which Einstein said is insanity

Like SK, you should know that you too have a choice. But for some people it is better to choose the devil that you know than the angel that you don’t know!

I have no problem with what you choose. My responsibility ends after telling you the truth the way I know it. So, be wise and make your choice.

What Your Need to Know About Iressa (or gefinitib)

If you understand this statement correct, it just means this: Iressa does not cure lung cancer. Iressa  caused shrinkage of tumours for at least a month in only 10 percent of patients.  Many alternative practitioners (including me) will tell you that shrinkage of tumour is just plain meaningless. Ask yourself: Why do I take Iressa? Is it to cure my lung cancer? Is it to only shrink by lung tumour for a few months and then it grows back again?

Possible side effects:  Each person’s reaction to any drug is different. Some people have very few side effects, while others may experience more:  Diarrhoea, acne-like rash, loss of appetite, feeling sick (nausea) and being sick (vomiting), tiredness, eye problems, change in blood pressure, breathing problems and it is potentially very serious, and a small number of people have died because of the lung problems they have developed while taking Iressa.  Source:  http://www.andygaya.com/chemotherapy/chemotherapy-gefitinib.html

What Your Need to Know About Tarceva (or erlotinib)

Between August 2001 and January 2003, researchers enrolled 731 patients with advanced non-small cell lung cancer (NSCLC) whose disease had progressed after one or two courses of chemotherapy. The patients were divided randomly into two groups. One group (488 patients) received Tarceva and the other group (243 patients) received a placebo.

If you understand the results of the above research, you will know that Tarceva does not cure any lung cancer. Those who took Tarceva lived longer by 2 months (median survival 6.7 months vs 4.7 months). After one year, 31 percent of patients were still alive – meaning 69 percent of patients died even if they took Tarceva. If you take Tarceva, your lung cancer progression is delayed by 0.4 months — 0.4 months? What does that mean – the disease slowed down by just about 2 weeks only?

Study the numbers carefully. Ask yourself again: Why am I taking Tarceva? Is it going to cure me? And it is proven that Tarceva produced toxic effects on patients – 9 percent of patients in the study gave up taking Tarceva because of the side effects.

As a conclusion, you may ask: But what choice do I have?  There is no choice if you choose to remain deaf, dumb and blind to what is going on around you!  At least to start with read what I have written in here:  https://cancercaremalaysia.com/category/lung-cancer/