SC (H222) was 68 years old when her problem started. She is a non-smoker. She started to have coughs for the past six months. There were no other symptoms apart from pains at the right shoulder blade.  A CT scan on 4 September 2008 showed a  3.0 x 4.75 x 3.0 cm opacity in right middle lobe of her lungs, suggestive of a neoplastic mass. Bronchial brushings showed moderately large neoplastic cells. Her blood test was normal, apart from a mildly elevated CEA (8.0). 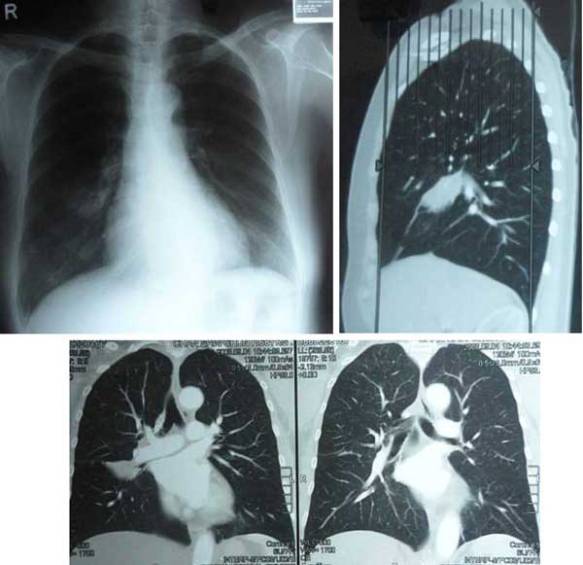 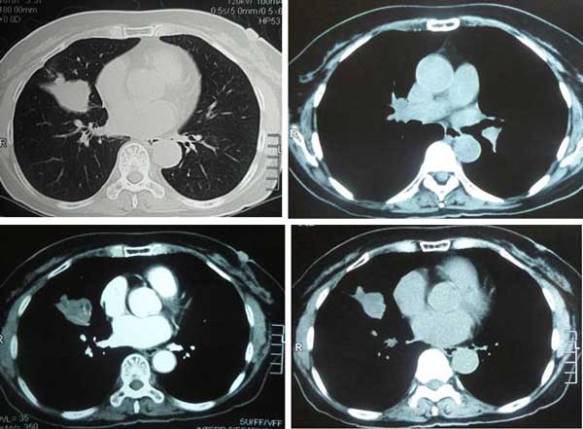 SC underwent a CT scan of her brain and abdomen and these were normal. Her bone scan was negative for metastasis.

Her doctor suggested surgery since this was regarded as an early stage lung cancer, Stage 1B. Surgery was done on 29 September 2008 but it was aborted – an open and close case. The cancer had spread to the back of the chest wall and was now considered a Stage 4 lung cancer. The doctor suggested chemotherapy and said that without this treatment she would only have six months to live. SC declined chemotherapy. Her sister died one year after undergoing surgery, chemotherapy and radiotherapy for her breast cancer.

SC came to seek our help on 18 October 2008 and was started on Capsule A, Lung 1 and Lung 2 teas. SC has been taking our herbs ever since – four years now.

We received this email from her daughter on 9 August 2012.

Last week, my brother and I took Mom to see Prof X, the doctor who referred Mom for surgery back in September 2008.   We last saw him in October 2008 when we went back to him after Mom has recovered from the open-close surgery.   At that time, he recommended chemo which we did not go for.

As Mom was complaining that the pain was still there even after we tried the ‘Soothanol’, we decided to take her to see Prof X hoping that he can prescribe something to ease her pain.

The following was what transpired:

When we went inside his office, Prof X was flipping back and forth what seems to be Mom’s file.  I was surprised that they still managed to find Mom’s file after 4 years.
He looked up from his file and read out Mom’s name.

Kim:  Yes… this is my mother (I gestured to my Mom)

Prof X gave Mom a look, gestured her to sit down and then went back to the file, which understandably does not contain any information post 2008.

Prof X:  What happened since then?  Did you go to another hospital?

Prof X:  What happened?  (We could see that he was scanning Mom with a look of bewilderment)

Kim:  You recommended chemo but we decided not to do the chemo.  So, we did not come back.

Prof X:  Are you seeing any doctor? (He was still having this bewildered look on his face)

Prof X:  You look good Auntie (speaking to Mom).  Prof X repeated: You did not see any doctor?
Kim:  No, the only “doctor” that we saw was Prof Chris.  My mother is taking his herbs.

Prof X:  Is this the guy who wrote the book on the rodent tuber?

Kim:  Yes, I believe Prof Chris wrote on the subject.  You can find more information about Prof Chris on his website.  (I volunteered)

We told him about Mom’s pain which has been there from Day 1 but currently more intense.

He then gave Mom a physical check behind the screen. When he was done…

Prof X then recommended that we do an X-ray of the chest to find out what is causing the pain which we complained.  I happened to bring along the old x-ray.  Prof X compared the 2 x-rays but there was not much that we can see from the new film except that the new one shows that the same patch is slightly bigger.

He recommended that we come back next week to do a CT scan.  I asked him what will happen next.  He said: Depends on the results, radiotherapy may be recommended.

He then asked whether we are taking any pain killers.  I said, No but we have tried before some over-the-counter pain killers which did not help.   He scribbled some prescriptions for us to buy from the hospital’s pharmacy and it turned out to be Arcoxia which Mom had tried before.

I was hoping that Prof X could prescribe some pain management pills or programme but I guess that would not be forthcoming until another round of thorough check is done.

We are of two minds about going back next week for the CT scan.  On one hand we thought perhaps it would be good to know Mom’s current status so that we can get relevant herbs from you if the cancer has spread to other parts?  But at the same time, I don’t want Mom to worry too much or having to go through the whole process again –  up and down the hospital for checks over & over again.   Shall we go for the CT scan?  Are all those rays going to do Mom any good especially in her condition?  We have heard that CT scan can cause damage to cells.

However, it has given us tremendous pleasure to see Prof X’s reaction when he saw Mom still in such good shape after 4 years without chemo and just taking your herbs.   His bewilderment seems to give Mom a lot of motivation too.

We have stopped using the Soothanol for the past few days as Mom was complaining about skin irritation.  I am currently applying tea tree oil on her – which provides her with some comfort but the pain is still there.

We received another email from Kim the following day.

Guess what!  I have just received a private call from a nurse.  We have never spoken to each other before.  The last we saw her was 4 years ago.  She “heard about our visit to” Prof X last week.  And after seeing Mom’s condition after 4 years, she wants to know more about your herbs.  She has a friend with cancer and would like to recommend her friend to try. I have given the website (www.cacare.com, www.cacare.org )and told her about Mr. Yeong and Khad for her to find out more.

She confided that it is very sad to see patients “going off” one by one. She’s hoping that her friend can try the herbs. This is incredible! Seeing is believing! Keep up the good work!  Best regards, Kim. 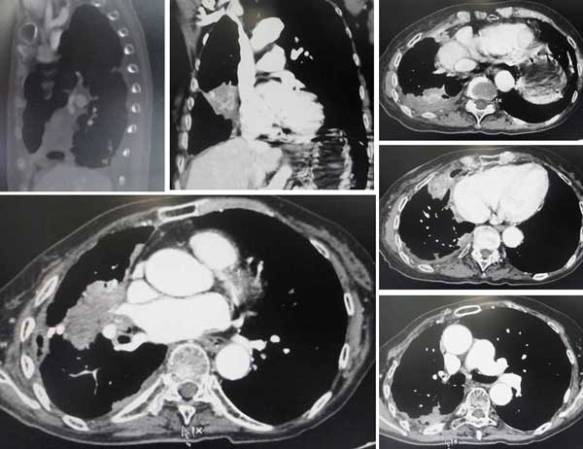 Anyway, we are VERY HAPPY with the results. Mom was expecting the worst as she thought the cancer has spread to other areas hence the persistent and intense pain. But as it turns out, the cancer has not spread – still confined to the right lung only. The left lung is all clear.

When Prof X told us the results, Mom asked again in disbelief. “No spreading?”   She was very happy. Prof X explained that the shape of the right lung has changed. The tumour has grown bigger and the pleura has thickened. There was some fluid but he said not to worry as its minimal. Prof X explained that due to the enlarged tumour and thickening of pleura, Mom will experience some chest congestion (which I think explains her shortness of breath?).

When we asked what is causing Mom’s pain then? Prof X explained that it’s from the enlarged tumour “pressing” the lining or thickening of the lining? (Hope I got this right.).

Prof X later asked us whether Mom wants to try chemo. My brother and I replied that Mom didn’t want it. He then asked Mom the same question directly. Mom replied, No.

Prof X then suggested that he will trace the samples that the surgeon took during the open-close surgery for lab testing to see whether Mom can take oral medication. We asked whether it is similar to chemo. His reply was, but it does not have the side effects of chemo as the drug attacks the tumour directly. He did not tell us the name of the medication but I suspect he is talking about Iressa.

As I was writing this, a nurse called me. I took the opportunity to ask her about the oral medication that Prof X mentioned yesterday. She said it is indeed Iressa. She also shared some of the side effects, e.g., pimples, nails coming off in some cases… she said so far she has not seen any patients on Iressa who survived longer than three years. She told me again just now that she is very surprised to see Mom in her fourth year on herbs.

As we were wrapping up for the evening, Prof X finally said it again, looking really pleased, “I am very surprised to see your Mother maintaining so well for 4 years.”

To sum up, we came away feeling really happy especially Mom. It’s as though a whole burden has been lifted off her. As we waited to pay for the bill, Mom told me adamantly that she doesn’t want to take anything else but your herbs.

I guess, we will have to continue to keep her positive. She now knows that there is nothing really “wrong”’ inside her except for the tumour.

The full story of Kim’s mother.

Acknowledgment: Thanks so much Kim for sharing mom’s story with us.