I received the following emails from a patient.

I’ve rectal cancer at stage 4. Have done my surgery (in Jan, 2012), 11 cycles of chemotherapy (2011) and 25 times of radiotherapy (2011). But the tumors recur and spread to both of my lungs and liver. Now the oncologist suggested to go for another 9 to 12 cycles of Avastin and 5-FU chemo. I’ve refused. Once again, thanks a lot for your unique info for cancer. I’ve learned a lot by reading from your website. Hope to see you soon. God Bless you.

This is his story. Let’s call him Leo.

Sometime in 2010 Leo had problems moving his bowels. He took laxative but this did not work. On 11 December 2010 he went for a colonoscopy in a private hospital in his hometown. The doctor found a stenosing growth in his lower rectum.  It was an adenocarcinoma.  Since Leo did not have health insurance coverage, he was asked to seek treatment in the government hospital.

A CT scan was performed on 7 January 2011 and the results showed:

In view of the above, Leo was told by his doctor that it was a Stage 4 cancer and he has only six months to live! He was given two options:

Leo’s life was turned upside down upon hearing this prognosis. He was in a mad rush wanting to do something but did not know exactly what to do. A week later, on 15 January 2011, he went to Kuala Lumpur for a second opinion. A CT scan was again performed.  This procedure cost him RM 1,000. The results of this repeat CT indicated:

Three days later, 18 January 2011, Leo did a PET/CT scan at another medical centre. This procedure cost him RM3,000.  The results indicated the following: 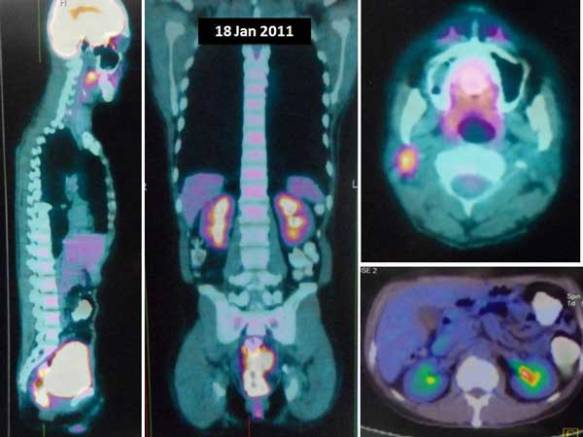 The adventure in Kuala Lumpur left Leo more confused. The earlier examination said he had metastatic liver cancer. But according to the PET scan there was not cancer in his liver!

Leo received a total of 6 cycles of chemotherapy – Mayo’s Regime, and 25 radiation treatments over a period of 8 months.

In early January 2012, Leo underwent a surgery to remove the tumour in his rectum. He was then fitted with a colostomy bag.

In June 2012, Leo was asked to undergo more chemotherapy, this time using FOLFOX + Avastin (see report below). He was  asked to undergo 9 to 12 cycles and each cycle would cost him RM 5,200.

Leo could not afford to pay for this expensive treatment.  The doctor offered him  the oral drug, Xeloda. He took Xeloda for three cycles and decided to stop it due to the following side effects:

Leo said he did not suffer all these side effects before taking Xeloda.

Leo decided to seek our help and was started on the CA Care Therapy in August 2012.

On 8 November 2012 Leo and his wife came to Penang for further consultation. He related his experience in the hospital’s cancer ward.

Some excerpts of our conversation.

Leo: I made a lot of friends in the hospital.

Chris: Did they ever get cured? Did they suffer?

L: (Shake head). No and most of them suffer.

C: This is the way it is. But human beings are such. They always think only  other people suffer, other people die but they never think that this can happen to them … they never die! “I am the exceptional, I want to try.” You try you suffer.

L: I stayed in the hospital for about 2 months.

C: What did you see?

L: So many people. Young and old. The youngest I saw was 6 years old.

C: Did they get better?

L: (shake head) No, all die. I stayed in a room with 4 beds, A, B, C, D. Within one night, 2 patients, C and D,  passed away. I was left with B. We both looked at each other. I also saw a patient committed suicide. He could not stand it anymore. No, cure, no money – all money spent. He went to Singapore for treatment. One million plus gone.

C: I got people who came and told me they spent about RM 600,000. So you have people who spent more than a million and still could not get the cure and eventually committed suicide.

L: I was in the hospital. He jumped down from the 6th floor. His son was sleeping by his bed in the ward. I heard him telling his son that night. “We don’t have money already. Don’t go around and borrow any more money from people. I cannot be cure already.”

This is indeed a very sad experience. Treatment means spending money. A lot of money!  But do patients ever get cured? Do we want to leave this world with piles of debts for our children to settle? That is the way it is today with “scientifically proven” cancer treatment.

I am not going to play god with patients who come and see me. I am not going to tell them when they will die or how long they can live because this is not my job. To live or die is God’s prerogative.  Giving prognosis like “You  have 6 months to live”  is most counter-productive and damaging.

J.D. Frank wrote, The insensitivity of scientific medicine to the bad effects of wrong emotions is probably responsible for many failures. 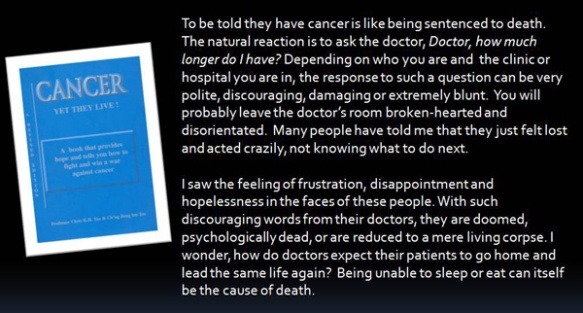 I also tell everyone who come to me that I cannot guarantee that you can be cured. I don’t want to give you false hope. But if you still believe in what we do here at CA Care, then together  —  I emphasize together, we shall do our best.  Remember you are not the only one going through this “battle”. There are many others before you who have travelled the same road. They too had colorectal cancer that had spread to the liver. I am happy to say that some are doing extremely well, but some had failed miserably.  But to say to cancer patients that “You only has six months to live” is mere text book knowledge!  My experience in CA Care showed otherwise. If medical science cannot provide hope to patients, let me say that herbs and change of diet and lifestyle can! And this done at minimal cost!

Let me ask you to listen to those who have succeeded.

While ALL patients who come to see us want to be winners, unfortunately some failed miserably in their quest for recovery. I often tell patients – after talking to you for a few minutes or reading your emails, I could probably “sense” if you can make it or not.  Unfortunately some people are not “cut” or made to be winners. I always say, kiasus don’t win! Here are three examples.

If there was one thing I ever remember clearly about this man was what he said when he first came to see me. He repeatedly said, I am a friend of your good friend. There is nothing wrong with this remark, except  to   remember that in CA Care, we play no politics! You don’t need to “pull strings” to get our best attention. Everyone who comes to us are treated equally.

My message to all cancer patients, You have a choice! It is up to you to decide.