LY is a 68-year-old lady from Indonesia. In late 2015, she had fevers on and off. This had been going on for some six months. At the end of February 2016, LY went to a private hospital in Johor for check up.

MRI done on the next day showed dilatation of the CBD (common bile duct). There is a round mass lesion in the lower end of the CBD protruding into the duodenum. Impression: biliary obstruction due to a polypoid mass arising from the lower end of CBD — ampullary tumour ?

LY was asked to do a scope but she refused. She decided to come and seek our help. After going through her medical reports, I advised LY to see a “liver” specialist in one private hospital in Penang. I advised LY that she might need to install a stent and clear off the blockage in the bile duct. After this is done, she can come back to see me again if she wants to take herbs.

CT showed a soft tissue mass at the ampulla of vater measuring 2.1 cm x 2.2 cm. The common bile duct is also dilated with greatest diameter measuring 2.3 cm. LY’s problem was diagnosed as cancer of the ampulla with biliary obstruction. There is no evidence of liver metastasis. 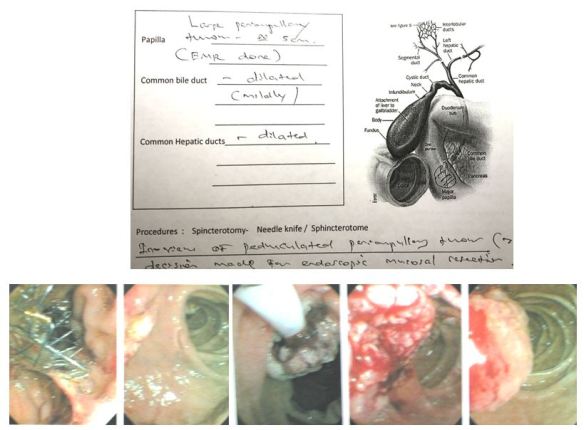 LY was asked to undergo follow-up chemotherapy. She refused to see an oncologist and came back to seek our help again. LY was prescribed Capsule A, C, D and M, in addition to Liver-1 tea.

For the rest of 2016 and until August 2017, LY was doing fine. Her blood test results are as follows:

Ultrasound of the pelvis and X-ray of the chest showed no abnormality.

In July 2017, LY felt discomfort in the liver region. She came to see her surgeon again in Penang. CT scan on 22 August 2017, showed the common bile duct and intrahepatic ducts are dilated with greatest diameter of CBD measuring 2.3 cm. Intraluminal soft tissue tumour thrombus nearly completely filled up the biliary stent in keeping with biliary obstruction and could represent cholangiocarcinoma.

The doctor flushed off the obstruction. LY felt better. This procedure cost RM 2,800.

LY came to our centre and told us what had happened. She looked good.

LY installed a metal stent in her bile duct and refused chemotherapy. So far she had lived a normal life! So patients, to live or to die is your choice! Know that you have a choice. Know also that what you choose to do will determine how you live and die later. Let me reproduce the emails I received from Canada.

14 November 2016: Dear Dr. Teo: I am hoping that you will be able to help us.  My mother has cholangiocarcinoma with metastasis to the liver.  Her primary tumour is just outside the liver in the common bile duct.  I have attached her recent MRI and blood work.

We are heading to the hospital right now because she has had a fever around 100-101 degrees F for several hours.  She has two plastic stents in the bile duct which are situated side by side.  In the last couple of days she is having some sharp pain over the spleen area.  She is on a mainly vegetarian diet since she was diagnosed June 29, 2016.  Her plastic stent is likely infected and her surgeon will change it this Tuesday.  I hope it doesn’t get worse by then.

As you can see, she is in no shape to travel.  She is dependent on me to take care of her. I know that you do not believe in treating patients at a distance without meeting the patient or a knowledgeable family member in person.  However, we are praying that God will send someone like you who can help us.  We put all of this in God’s hands and are praying you will be able to help us. I would greatly appreciate hearing back from you. My mother has not had any chemo, radiation or surgery.  She is still eating and can walk for 25 minutes without stopping.

She has a paracentesis stent draining her abdomen and she has leg edema.

She is no longer on meropenum for a possible infection even though blood cultures came back negative.  Could localized in bile duct.

It may be too far gone, but I know with God anything is possible. She is very weak and cannot walk anymore and hardly eating.  The hospital staff keep trying to  give her morphine around the clock even when she doesn’t want it.

The morphine and buscopan had her so constipated for 4 days that she could not have a bowel movement even after using the hospital protocols and my coffee enema.

My mother is still hanging on and has not been in hospital since Dec 22, 2016 when she got the two plastic stents in addition to the metal stent she previously had.  We have taken the kid and liv teas and the one for constipation. She has some leg pains at night and I am contemplating giving  the pain tea for it . Bilirubin is 14, but ALT is about 499 and GGT about 440.

I think she could benefit from the capsules but cannot do so without your guidance and feedback about healing reactions to expect .

23 May 2017: Dr. Chris, …. everything went downhill when the stent procedure didn’t work and the rest of the family who know nothing about health and who don’t want to learn anything new insisted she stay in the hospital for the past month in palliative care with no fresh air, sunshine or healthful food and supplements/herbs etc and was just fed painkillers etc.

The doctors say it may happen anytime and she is so weak that it could be days. Her albumin is only 14 or 15 and her sodium was 116. She has been taking 4 g of NaCl capsules each day and the sodium is up temporarily to 121-125. Sometimes she has problems swallowing when she is sedated. However, she had begged me to take her home which I intend to do tomorrow.

5 August 2017: Sadly my Mom passed away May 29th.  My siblings argued with me and kept her in the hospital and it broke my heart to see them kill her with drugs. So we were never able to use your herbs.

My 65 year old brother just got diagnosed with small cell ca of the lung – 7 cm which they told him that surgery is not an option. Chemo or radiation. Could these herbs help him?

Reply: Like your mom too, no, I cannot help patients from faraway places! Let the doctors help him.

Dear Dr. Teo: I hope this finds you well. I got in touch with you earlier about my dad. Sadly he lost the battle with cancer. He went down the chemo route and we lost him pretty soon after. https://cancercaremalaysia.com/2017/08/31/they-went-for-chemo-and-they-died/

Here are some stories of hope and success!

Pancreatic Cancer: No chemo, only on herbs. Still fine after 4 years

Let me end by asking you to reflect on the quotations below: