YS is a 50-year-old lady. She had many lumps in both breasts. 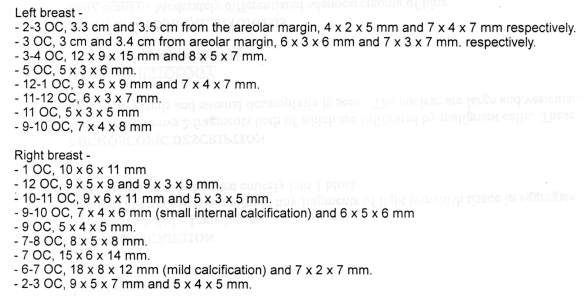 Although most of these lumps appear to be benign, there is one lump that does not look good. This one is found at 12-1 o’clock of the right breast and measures 13x9x12 mm in size. A biopsy indicated an invasive ductal carcinoma.

In addition,. CT showed a 7.4 x 5.7 cm nodule in her liver and multiple uterine fibroids. The liver nodule could just be a haemangioma.

I suggested that YS consult a breast specialist. YS must have the malignant lump removed — either by lumpectomy or mastectomy. I told YS: Taking herbs will not make the cancerous lump go away!

YS agreed to my suggestion. A few weeks later she came back with her medical report which stated the following:

The above shows that this  is an early stage cancer. However, after her lumpectomy, YS was asked to see an oncologist for possible follow up treatments.

YS spent almost an hour with a caring oncologist. The consultation cost RM 180.

The oncologist suggested  that YS undergo the following treatments:

According to the oncologist the chance of obtaining a cure is 90 percent.

YS refused to go for these treatments and opted for our CA Care Therapy instead.

As usual, I asked YS why she did not want to go for chemo. YS explained that her grandmother died of cancer when she was small. Her father also died of lung cancer. He had all the medical treatments at the cancer hospital. So she knows what chemo is like.

Chris: So you have already made up your mind NOT to go for chemo even before you come and see me?

C: What does your husband say? Is he not unhappy that you don’t want to go for further medical treatment?

YS: He learned about CA Care from someone, so he was the one who asked me to come and see you.

Cookbook medicine is defined as the practice of medicine by strict adherence to practice guidelines, which may not be an appropriate substitute for clinical judgment.

Try to google, “cookbook medicine” and see what you can find.  The first entry of my search is this:

Cookbook Medicine Is a Recipe for Disaster … An astonishing new article from JAMA Internal Medicine reveals that at least 150,000 people per year may be needlessly killed, rendered disabled, or otherwise harmed due to misdiagnoses in doctors’ offices.

Is that not scary — 150,000 people per year needlessly killed, rendered disabled or harmed by doctors? I thought you go to the doctor to get well not to be killed or harmed.

The truth is, according to an oncologist, Dr. James Forsythe,  it is okay to be killed or harmed by chemotherapy as long as the standard protocol is adhered to.

I wonder how many patients know the “rule of the game” before they undergo their cancer treatment?

Let us look at the case of YS again.

While chemo cost a “bomb”. It also comes with severe side effects. Generally oncologists down play these side effects, brushing it off as “it is like ant bite.”

Take note, each Herceptin injection is not cheap and comes with severe side effects as well. Not known to most patients,

Herceptin can damage the heart and its ability to pump blood effectively. This risk has ranged between 5% to 30%. The damage can be mild and result in either no symptoms or signs of mild heart failure, like shortness of breath.

Why do you need to take Tamoxifen? The doctor says, it is to prevent recurrence. But I have patients who suffered recurrence even while taking Tamoxifen.

Having outlined all the necessary treatments, has the oncologist forgotten that YS also has multiple fibroids besides a big nodule in her liver? Perhaps doctors think these are harmful, but to me they carry a message that something is not right or normal. Yes, at CA Care we do have herbs to take care of such problems.

Over the years, I have breast cancer patients coming to our centre seeking help after medical treatments have failed them.

·        Breast Cancer: Surgery, Chemo, Radiation and Tamoxifen Did Not Cure Them

·        Surgery and Chemotherapy Did Not Cure Their Breast Cancer: Equally A Big Mistake?

Let me say loud and clear that you cannot blame this “caring” oncologist for proposing the above protocol. He is just following the SOP. He wants YS to get well. And the only way he knows how to make her well is to do what he had learned in medical school. He even said that by undergoing the full course of the suggested protocol, YS has a 90 percent chance of cure!

Do you ever wonder, why there is only a 90 percent chance of cure? Patients want 100 percent chance, right? So in this case, even if YS were to undergo all the suggested treatments she still has a 10 percent chance of failure or may even be killed along the way. Yes, Dr. Forsythe did warn us: …oncologist’s main hope is that the chemotherapy will kill the cancer before it kills the patient.

Read also what Dr. John Lee wrote in his book, 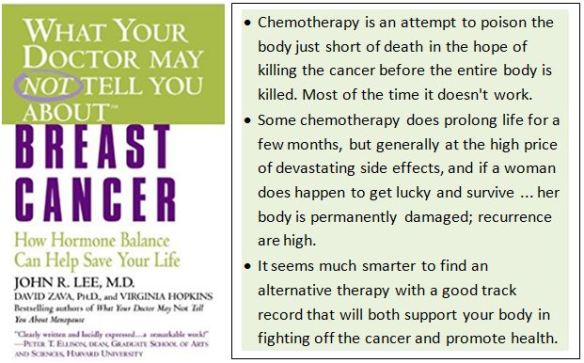 If the above are depressing to you, there is an article in the New York Times that may make your day a bit brighter —

Indeed the world of cancer treatment is not straight forward. For sure it is not as easy like sitting in front of an oncologist and within minutes you get his/her recipe for your survival. It is much more complex, puzzling and confusing. Ponder seriously the words of these two outstanding breast specialists. Perhaps you can learn something from what they said. Or do you prefer to follow the advice of your oncologist since he “knows best”?